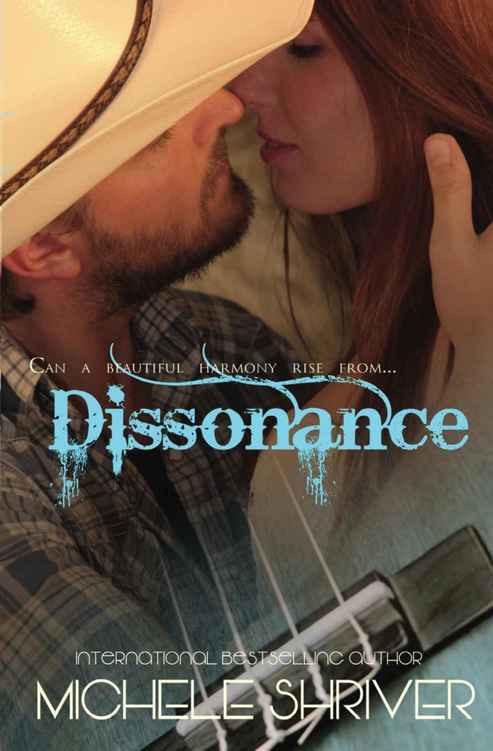 This is a work of fiction. All characters, locales and events are either the product of the author’s imagination or are used fictitiously. Any similarity to actual persons, living or dead, is entirely coincidental.

“Michele Shriver writes with such honesty, warmth, realism, and from the heart.” - Reader review

“This book had me by the second page. Emotionally charged, well developed characters and story line.”- Reader review

“I loved this book!”- Reader review

a.               a simultaneous combination of tones conventionally accepted as being in a state of unrest and needing completion.

K
enzie Bolton slid into the restaurant booth opposite her manager and braced herself for the bad news. She figured the news had to be bad, because Carey invited her to lunch, presumably so he could deliver it in person. Were the news good, he would have simply called and told her over the phone. That was Carey. He was different from any other manager Kenzie ever had. Not that this was saying a lot, because she’d only worked with two managers during her four year recording career. The first one made her a star, and ruined her life. So far, Carey Preston had done neither, earning him a .500 record. He was no Jesse Cole, that was for sure, and Kenzie was grateful for that fact every single day.

“Is it close?” After all, Kenzie had put her heart and soul, sweat and tears—and even some blood when she’d cut her finger on a guitar pick—into
Takin’ it Back,
the second single off her first post-Jesse album. She wanted the album to succeed. More accurately, she
needed
it to succeed. How else was she supposed to prove to Jesse that she could make it on her own, without him controlling every aspect of her career and her life?

“Not real close, no,” Carey said, steepling his hands in front of him. “It’s doing a little better than the first single. We’re charting at sixty-two for the first week.”

“Sixty-two on the Top 100?” No, probably not, given Carey’s expression, but a girl could dream, right?

Carey sighed and shook his head. “Sixty-two on the country chart, Kenzie. As in nowhere close to the Top 100,” he said. “I’m very sorry.”

Kenzie let out a dry, humorless laugh. “Yeah, me too.” She wanted a hit, and she’d gotten a flop. No doubt Jesse already knew, given his connections in the business, and was probably having a good laugh and a strong drink at her expense. After all, he’d promised to make her a success in the music business, and he’d done that and more. In less than two years after arriving on the country music scene, Kenzie had notched multiple wins at the Academy of Country Music Awards and been proclaimed to be Nashville’s sweetheart.

She had everything she wanted, or so people thought. After all, she was married to the best manager in the business, and a sexy and talented singer in his own right, even if he no longer recorded. Young girls all across America wanted to be Kenzie when they grew up. Except Kenzie herself. She only wanted out from the nightmare.

“This was supposed to be my new beginning, Carey. My rebirth, if you will.” After escaping a nightmare, didn’t she deserve that? “Is Jesse going to win again?” He’d warned her, many times, that she’d fail without him.

“No, Kenzie, he’s not.” Carey’s tone was firm. “This is just a setback. You’ll be back. You will triumph. You’re beautiful and talented, and you have a bright future in this business. Maybe it will be with a different manager. I’ll understand if you make that decision, because I haven’t delivered for you so far,” he said. “No matter what, though, I’ll be pulling for you.”

It was a pleasant change from Jesse’s threats. Carey was such a nice guy. Was he
too
nice? Perhaps, but Kenzie wasn’t ready to give up on him after two singles from one album. “Thanks, Carey. I enjoy working with you, and you’ve got a good reputation. I want to hang in there,” she assured him. “But I need a hit before I fade into oblivion, so I want to know if you have any ideas. Where do we go from here? How do I get back on the charts?”

Carey leaned forward, resting his elbows on the table. “I understand the frustration. I do have an idea, and what I think is a pretty solid proposal.” He raised his hand to gesture for a server to come to their table. “Let’s order some lunch and I’ll tell you about it. And promise me you’ll hear me out and not say ‘no’ right away.”

“Are you completely out of your mind?” Chase Radcliffe blinked and stared at his manager. Surely, Carey hadn’t flown all the way to Chase’s home in New England just to propose such a hare-brained idea.

“No. This is a tremendous opportunity for you.”

“You want me to record a duet? With a country singer?” To this point, Carey had never steered Chase wrong, and done great things for his band, A New Horizon. Chase credited his brilliance with helping the little indie rock band that played college bars near the Dartmouth campus get discovered and signed to a major record label, as well as have their debut album go multi-platinum. But maybe Carey had finally lost his touch.

Chase uncapped a water bottle and took a drink. “Am I supposed to know who that is?”

“Um, yes… she
is
known as Nashville’s sweetheart after all.”

Chase wasn’t impressed. “I thought that was Taylor Swift.”

Carey let out a laugh. “Man, you are really behind the times. Taylor lost that title when she gave up her country roots and went pop.”

“Whatever. I’ve been busy. So is that what this Kenzie person wants to do? Break out of country and go rock and roll, and she’s counting on me to help her make the jump to another genre?” Chase asked. No way he wanted anything to do with someone riding on his coattails to achieve success. “Because as much as I love a good charity, my preferred causes are sick kids and the military, not other musicians.”

“No one’s asking you for charity, and Kenzie’s not turning pop or rock and roll or anything else. The song would be country,” Carey explained. “Or more accurately, alternative country. Did I mention Keith Trainer would be producing?”

Carey hadn’t, and hearing the name of one the best producers in the business was enough to give Chase pause. For a second, anyway. “I don’t care if it’s Qunicy Freaking Jones. I don’t sing country and I don’t sing duets.” Even if it
was
every musician’s dream to work with Keith Trainer. And what exactly did he mean by alternative country? Damn it. Chase’s interest was piqued, even if he didn’t want it to be.

“You haven’t before, but that doesn’t mean you can’t,” Carey told him. “Besides, it’s not like you don’t suddenly have a lot of free time on your hands.”

Yeah, there was the rub. Ever since his bass player decided he wanted to get married and take some time off, Chase’s band was on hold. Sure, he could find someone else to fill in. Jordy was a good bass player, but he wasn’t irreplaceable, and there would be no shortage of budding musicians wanting to join A New Horizon. But Jordy was Chase’s best friend, and had been for years. It wouldn’t feel right to replace him, even if it was temporary. That left Chase with a void. Music was his life, and Carey knew it, which is why he knew this offer would be tempting.

“I’m not bored,” Chase insisted, trying to convince himself as much as Carey. “I’m using the down time to write, so I’ll have a whole catalogue of songs ready to go whenever Jordy wants to come back.”

Carey nodded. “Sure, that’s cool. Writing’s good. You’re gonna miss recording, though. A few more weeks and you’ll be itching to bet back in the studio.”

“Will you still feel that way when your family gets on your case again?”

“My family is
always
on my case,” Chase said. “That’s nothing new.” It frustrated him, yes, but he’d gotten used to it. Or at least he’d become more adept at tuning them out. As if he’d actually give up music to go to medical school when he was making millions doing what he loved? Yeah, right. Not happening. It might be what Radcliffes were expected to do, but not
this
Radcliffe. Chase preferred to go against the grain.

“It’s going to get even worse if they think your band is breaking up.”

“My band is
not
breaking up. We’re just on hiatus.” Chase glared at Carey. “Will you stop, please?”

“Sure.” The manager grinned. “As soon as you admit you’re at least a little bit curious and agree to go to Nashville to meet Kenzie and hear Keith’s pitch. Opportunities like this don’t come along every day. Do you really want to pass this one up without even talking to him?”

Chase drained the last of the water bottle and tossed it in the direction of the wastebasket, where it clanked off the side before landing on the floor. He may still have medical school to fall back on if the music didn’t work out, but a career in basketball obviously wasn’t happening. “Fine, I’ll go to Nashville and meet them.” He might be stubborn, but Chase wasn’t crazy or stupid. And it was Keith F’ing Trainer.  “That’s all I’m committing to right now, though. A meeting. One meeting. If I don’t like what I hear, I’m on the next plane home.”