Read Happier Than She's Ever Been... Online

Happier Than She's Ever Been... 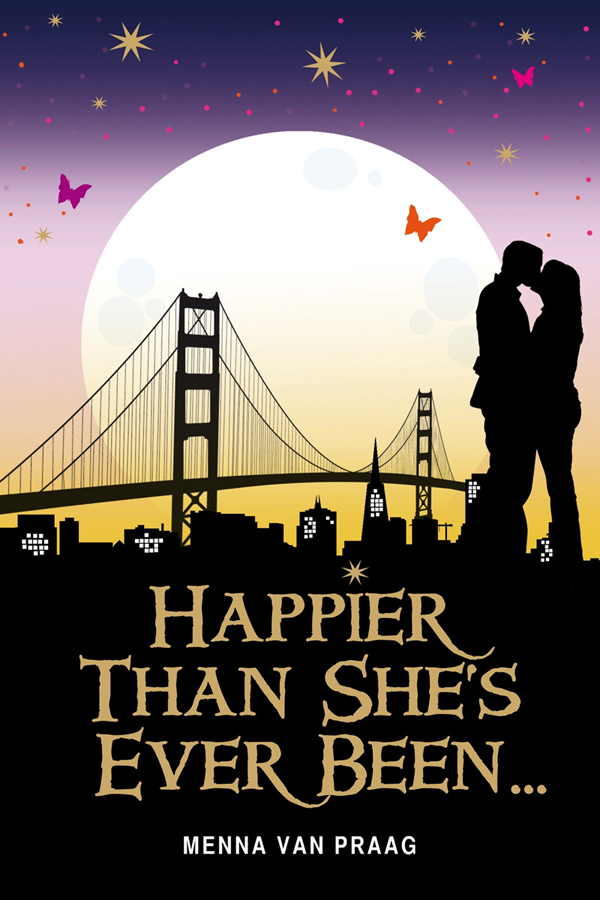 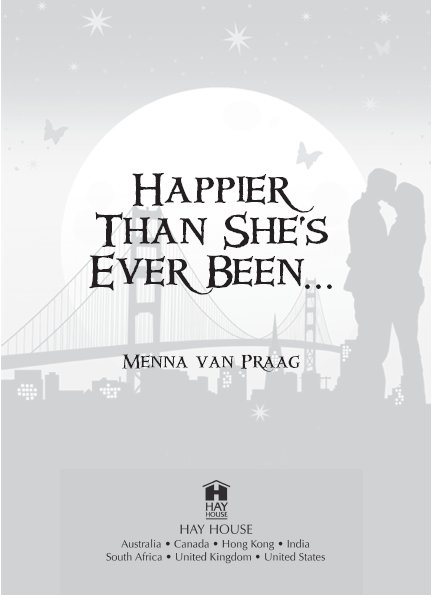 The moral rights of the author have been asserted.

All rights reserved. No part of this book may be reproduced by any mechanical, photographic or electronic process, or in the form of a phonographic recording; nor may it be stored in a retrieval system, transmitted or otherwise be copied for public or private use, other than for âfair use' as brief quotations embodied in articles and reviews, without prior written permission of the publisher.

The author of this book does not dispense medical advice or prescribe the use of any technique as a form of treatment for physical or medical problems without the advice of a physician, either directly or indirectly. The intent of the author is only to offer information of a general nature to help you in your quest for emotional and spiritual wellbeing. In the event you use any of the information in this book for yourself, which is your constitutional right, the author and the publisher assume no responsibility for your actions.

May Fitzgerald was happy. Happier than she'd ever been in her life. All her dreams had finally fallen into place. After many years of striving and suffering, disappointments and despair, misery and mistakes, and after many life lessons, everything had at last come together. Now she lived in a beautiful city, in a beautiful home, with the most beautiful man she'd ever met. And her book â the one she'd needed so much courage to create, the one she'd sold her cafÃ© to self-publish, the one she'd travelled across America to sell â was steadily becoming rather successful.

May had also stopped stuffing herself with vast quantities of chocolate to suppress her sadness. Which was easy, since she wasn't sad any more. So she could leave chocolate bars in the fridge for weeks on end without being remotely tempted to scoff them all at once.

May was extremely grateful for her new life. She thought often about her old one and how she might never have found the courage to leave it if not for the help she'd received from all the magical people she'd met. Most especially Rose, the little old lady with the sparkling blue eyes, who had found May full of loneliness and self-loathing in her cafÃ©. And Faith, her cousin and the loveliest friend one could ever hope to have. Without them May would still be sitting behind the counter at The Cocoa CafÃ©, sobbing into her cappuccinos, gobbling entire cakes and falling in love with men who didn't want her.

Yet because of them here she was in America, living all her dreams at once. Even after a year, May could still hardly believe it was true and regularly had to pinch herself just to be sure she was awake. Now May dedicated her free time to helping other women who were suffering with the same issues she'd struggled with for so long. Since they might not be lucky enough to meet inspirational people by chance, and certainly wouldn't bump into Rose in their local cafÃ©, May hoped to be the magical stranger in their lives, the one who set them on the path to their own particular joys. And when these women came back to tell her how much she'd helped them and how much happier they were now, May felt more joyful and grateful than she'd ever imagined possible.

Every Tuesday and Thursday evening at her boyfriend Ben's bookshop May held special open events. She baked a few goodies for those who came, read passages from her book, answered questions, played games and generally did whatever she could to bring a little joy into their lives and, hopefully, some long-term happiness too. One day, as she was clearing up after a particularly wonderful evening, May remembered something the lovely Rose had said to her: that she mustn't feel guilty about being happy, because people who are happy spread their joy, sprinkling it all over the people they meet, while unhappy people do just the opposite. So being happy was really about being a bright light in a dark world. Which was exactly what May wanted to be.

Every day for the past few months May had awoken to sunlight streaming through her windows, such were the benefits of a San Franciscan summer, and every day she lay under the duvet for a little while, just smiling to herself. No matter where she was in the world, or what she was doing, May always woke up early. Having run a cafÃ© for a decade, the instinct was now embedded in her. But she didn't mind. In fact she loved having time to let the sunlight sink into her skin, to strengthen and fortify herself, before the day really began.

When May got up she left Ben snoring softly beside her and padded over to the kitchen in her pyjamas. They lived in a little two-storey flat above his bookshop, left to him by his grandfather. It had been the first ever bookshop to stock May's novel and to honour it with a window display. Living above about two thousand books thrilled May more than she could possibly put into words. Sometimes, very early in the morning, she'd tiptoe down the little spiral staircase and just stand on the bottom step, gazing out at the maze of bookshelves that were weighed down to breaking point, then up at the golden stars that studded the deep-blue ceiling, and down at the oak floors. And, as she breathed in the slightly musty smell, May would let out a small sigh of pure gratitude.

Her life with Ben was a simple one, and she absolutely adored it. Not having much money, their evenings alternated between going for walks in the city and visiting their favourite free haunts: the Japanese Tea Garden, the bench on a hill overlooking the Golden Gate Bridge, window shopping on Height Street, sharing coffee and cake at The Tea Cup. When the bookshop closed they spent hours exploring, reading each other passages from their best-loved books and making love in every aisle. Upstairs in the flat, when they weren't in bed they were in the kitchen. Ben did most of the cooking, while May did most of the eating and post-prandial cleaning.

Of course, amid all this bountiful joy, they still had disagreements, even the occasional fight. They had bad days and sometimes took out their hurt and frustration on each other, but they were never calculating or cruel; they merely made surface scratches, easily rubbed off, that never undermined the safety they felt together.

For the first few months May had felt nervous, remembering how her last heart-breaking relationship flew for a few blissful months, then quickly crashed and burned. So she was always a little anxious, waiting for the day Ben would tell her he didn't love her any more. But then months passed, then nearly a year, and nothing changed. He still loved and wanted her just as much as she loved and wanted him. And that was such a blessing May still couldn't quite believe it. When she'd fallen for the stunning, emotionally unobtainable Jake, who was driven away by her neediness and neuroses, May had thought she was doomed, that she'd have to resign herself to a life without love. And, miracle of miracles, now it seemed she'd met her soulmate.

Every morning she made fresh coffee, which she took to Ben, who couldn't function before his first gulps of caffeine. On Saturdays and Sundays she made blueberry scones. Now that she no longer
had
to bake dozens of cakes each morning, May rather enjoyed creating delicious treats in their tiny kitchen and filling the flat with the smells of cinnamon buns, chocolate tarts, lavender doughnuts, vanilla macaroonsâ¦ Sadly she had tried in vain to find all the ingredients for chocolate flapjacks in the shops she'd visited (and had been surprised to discover that, across the pond, flapjacks were actually a type of pancake) so Ben had yet to taste her speciality. But the week before, on the anniversary of her mother's birth, May had made Lily's favourite rosewater and white chocolate cake, and Ben had declared it the best thing he'd ever eaten in his life. Ever. And then she'd showered him with kisses.

After Ben had sipped his coffee and snuggled with May until he was almost late, then dragged himself out of bed, showered and taken a second cup to his desk downstairs in the bookshop, May would trot up another spiral staircase in her pyjamas and sink into the sofa of the little room that was hers alone. A week after she'd moved into Ben's flat, only three weeks after they'd actually met, he'd created a special space just for her: to write, to think, to be.

It was a small room. One wall was a large window overlooking a long street that dipped down towards the sea and was lined on either side with different coloured houses. In the distance, on a clear day, the red railings of the famous bridge were just visible. May loved to stare out of that window. For weeks now she hadn't written a single word but had simply gazed and smiled up at the sky. She felt a new kind of happiness: one that wanted nothing, needed nothing and knew that everything was absolutely perfect, just the way it was. In this mood, May found it impossible to pick up her pen, because nothing else needed to be said.

So instead she doodled. Drawing patterns and random words in large elaborate letters, the long thin curl of consonants and vowels reaching up and gliding down the page. Sometimes it felt as though she was waiting. She sensed that her next story was inside her, slowly forming, and she just had to pass the time until it was ready to be born. And May was quite happy to wait; she was no longer frantic or scared of the failure to succeed, the inability to achieve anything. She felt complete. Just as she was. She didn't need to be special, or to produce something spectacular, in order to be a better person. She knew that nothing she did could add to or take away from the simple perfection of exactly who she was, from the tips of her fingers to the depths of her heart.

As a child and a teenager, in fact up until a year ago, May had felt unlovable. And, looking back on it, she knew it had started when she was six years old, when her father had left. Although her mother had told her over and over again that it wasn't her fault, that he still loved her, May had never believed it. She worried there was something really wrong with her; she feared a secret reason too horrible for her mother to express. Over the years the reason took various forms: she was too ugly, too boring, too stupid, too plain, too simple, tooâ¦ And when her father never came back, she knew they must
all
be true. She'd taken these insecurities into every short-lived relationship she'd ever had. In the beginning May had always feared she'd be abandoned once they decided she was too fat and discovered all her other imperfections. And so, despite her best efforts to the contrary, she became needy and clingy, and leave her they always did, confirming all her worst fears about how unlovable she really was.