Read I Must Be Dreaming Online

I Must Be Dreaming 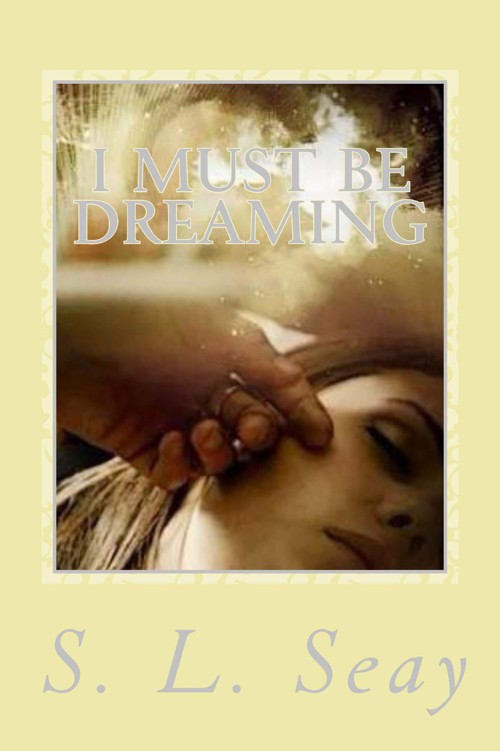 I Must Be Dreaming

I first want to say this is the first book I ever wrote and I never thought I would ever get this far without my family!!

I want to first thank my best friend who without her this book would never have come to be! Karrie I’m so glad you believed in me. To my beautiful daughters that inspire me every day with their imagination. My wonderful husband who put up with me during this whole process. And to the rest of my family, Thanks for all for your love and support, I love you all!!!

I went up stairs to my room which was my favorite place. I could stay up here for days, if she would let me. I had my own bathroom which is a big deal and we had painted the walls with pictures of stuff I liked and places we wanted to go. I didn’t have many friends, a lot to do with not going to school much; but I had two really close friends. My mom of course and the other was a girl I just met not too long ago. She had moved down the street a few weeks before and was about my age I think. She had come over to borrow something I don’t even remember now and we hit it off right away. That made my mom happy that I had a friend. Not that I was lonely or an outsider just never made the effort to play outside like the rest of the kids. I was one of the, I guess nerdy kids or computer geeks. I was happy with the way things were, I felt like I had everything. I did have it all. The phone rang and I picked up. “Hello.” I said with my usual bouncy self. “Is this Cora?” I didn't recognize the voice on the other end it sounded, well creepy. “No, Its Izzy you want my mom?” Silence hung between us for a few seconds then the creepy voice spoke again. “I didn’t know Cora had a child.” Something felt wrong and I immediately got nervous. “Can I ask who this is?” I tried to sound polite even though my gut told me to hang up. “Of course, this is your Uncle Hank.” I knew my mom's whole family and have meet them all, there is no Hank. “My mother doesn't have a brother, are you sure you have the right Cora?” I asked the voice on the other end. "I'm positive; just get your mother please." When he said please it sounded like he was getting agitated. I sat the phone down, went to the stairs and called to my mom. “Mom some man is on the phone, he says he is my Uncle Frank.” I heard the paint brush drop and her voice pick up. But by the time I got back to the phone to hang it up I could hear the dial tone. Something about that guy made me feel uncomfortable. I went down stairs and after I questioned my mom a couple of times about the call, she assured me that that was some prank call and that she was an only child. She went back to her painting and said to go back up stairs. I wasn’t allowed to see her work before it was done.                                           I plopped down on my bed and was about to put my iPod in when the door bell rang and I heard some voices saying my name. My mom’s voice got a little loud so I came down the stairs about half way. I figured it was those people trying to sell something again. She hated that people had no respect for your privacy at home! She turned at the door and told me she would be back soon with a smile. I assumed she had to get some more paint or something like that. I never imagined that, that would be the last time I would ever see her alive again!

I was running for my life. I knew if I could just get to him he could help me. He always protected me. I ran into the woods where we use to meet. I felt something strike my head and the next thing I knew, my knees were weak and my eyes wanted to close. I started to fall to the ground. I couldn‘t catch myself and my world went black.

When I woke it was dark and the smell of rain was in the air. The grass was not wet yet but it soon would be. The leaves where full on the trees it was fall, I think. The trees blocked most of the lights of a city, but I could still see them in the distance. There was a gravel road up ahead, but the leaves that fell had covered most of it. I looked closer and I could see some of the gravel underneath. The color of the woods seemed to jump out at me. Every detail of the trees, grass, even the animals were more distinct. I could hear the insects moving on the ground. I was seeing all of the forest like it was alive and moving. My eye’s started to burn and I started to feel sick, I began to gag. I put my head between my knees to stop myself from vomiting. I rolled over on my back. How long have I been here? But more important was, how did I get here and where is here!

I tried to sit up but my body ached. It felt like I had been hit by a car. Maybe I had been hit by a car. I closed my eyes trying to remember, the last thing I could recall was loud music, lots of people, and flashes of light. My head felt heavy and if I moved the wrong way or to fast it would explode. I breathed out deep and started to get up but suddenly I heard a noise and every muscle in my body reacted. I was on my feet and running. I don’t even know how I was doing it. Whatever it was was getting closer and before I could think there he was standing in front of me. His green eyes blazing. We stood there looking at each other when he finally spoke. At first his words did not register. I was struck by his beauty. He was tall probably about six foot or so. I’ve never been good with height but compared to me he was tall. His dark brown hair had some curls at the end, and barley touched his ears. He had broad shoulders and you could tell he was muscular but not the type you would see in the he-man contest. No, he was just right and very nice to look at. “How did you get here?” He said with a little anger this time. I didn't know he was talking to me. My voice came out like a whisper, “I…I don’t know.” He glared at me a little longer before his face lightened and he asked what my name was. I had to think for a moment, I felt like my brain was in a thick fog trying to cut through. What was my name? A faint voice inside my head said Izzy.                                                         Finally I spoke but it came out so soft I barely heard myself, “Izzy?” I watched as his body relaxed and his face brightened. “Well Izzy I better get you inside.” He held his hand out for me to take. WHAT? I was confused and not sure how to take him. How do I know he had not done this to me, but when I looked in his eyes something told me to trust him. So like the dumb girl in the horror movie I did. I knew he could tell what I was thinking because he said again. “I need to get you inside” but with a little conviction this time. “You never know what’s out here and you look like you could use a shower.” He said with a smile on his face. And for the first time I looked at myself. I wasn’t wearing any shoes; my clothes were tore and matted with mud or was that blood. My hair was longer somehow and had bits of grass and mud as well. I felt embarrassed looking this way in front of him. He didn’t seem to care because by the time I looked up he had turned and started to walk the other way pulling me along. It took only a second before my feet were following right behind him. “Where are we? “ I asked. He just kept walking. Maybe he didn’t hear me or maybe he didn’t want to talk. For some reason I was pretty calm for someone who didn’t know what was going on or where she was going. I couldn’t explain it but it was like I had been here before like in a dream or something.                                                        I just followed along behind him through the woods like I had always known him. We came to a clearing in the thickest part of the forest and what looked like a cottage was sitting there. It looked like something right out of a fairy tale. Snow White to be exact, my favorite as a child. Right in the middle of the woods this was so unreal; I pinched myself just to make sure I was awake. This could not be real; so I will just go along with it. I pinched myself hard this time on the arm to see if that would work. Ouch, all it did was leave a small red mark. I rubbed my arm where the mark was, I pinched a little too hard because it started to sting. We got to the door and he stopped and lifted his head, like he was sniffing the air. I almost started to giggle. He turned and said “my sister is home. She’ll have some clothes that should fit you.” I had almost forgotten about my clothes and how ragged I looked. He must have been repulsed. I was a little worried because he was so beautiful and well I was…. me. So I walked in the door behind him and when I lifted my head I was not sure this was the same place. It was huge. There was a long corridor with many doors. The living room was a cream color with black leather couches, a massive flat screen TV and an elegant rug on the floor. It was deep red, the color of blood when it first starts to trickle out. I licked at my lips because they were very dry. At that same moment my stomach growled. I didn’t even realize I was hungry.