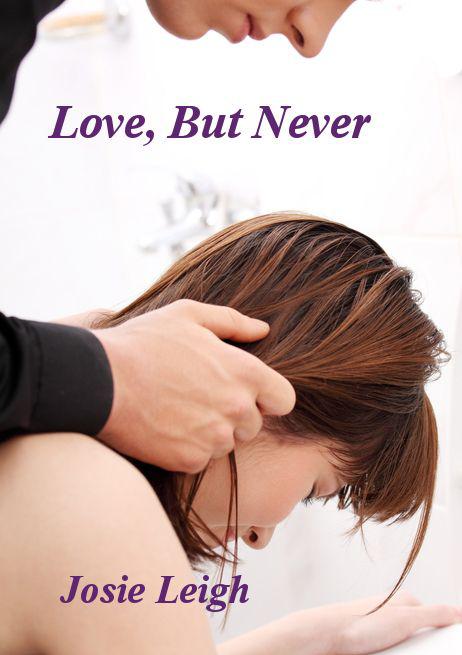 This story is for entertainment purposes only.  Names, characters, places, events, most businesses and organizations are either a product of the author’s imagination or are used fictitiously. .  Any resemblance to real persons, living or dead, is purely coincidental.

EXCERPT FROM “WEAKNESS IN ME” (COMING SOON)
297

I am broken, bruised, shattered. That’s what drives me. That’s where my need for control comes from. I’ve been dominated, destroyed, controlled more than I care to remember, by those I’m supposed to trust by birth. This is the only way I know to feel powerful. It’s intoxicating and habit forming,

could take, more than any drug I could smoke. I never knew it would be like this. That first taste sent me careening over the edge.  I thought I had control over it, but I couldn’t stop.

It’s only him that brings everything into focus, though. That gives me relief- that lets me feel something more than the numbness that spreads through me most days. He makes me feel alive! I blossom under his gaze, his words, his touch. Maybe we can guide each other to be more than two shattered souls fumbling in the darkness toward a light we’ve never been able to find alone. Together, we can be stronger than our collective pasts. I hope we can save ourselves

from the firing squad to find the freedom I desperately need to be whole.

Sometimes, falling in love takes time, while other times, it comes at you like a freight train. Our love took time, years, but maybe it was denial that it wasn’t there all along. Maybe we didn’t see what was right in front of us, how we wasted so much time. Maybe we were too young to see it, until it was almost too late… I hate to think what would’ve happened if Matthew hadn’t come back into my life when he did…

Creak!
Marissa Masterson pulled back from John Kramer’s embrace as one of their classmates from Chemistry gave them a nod before heading toward the vending machines in the back of the student lounge.  She tried to turn their attention back to their homework.

“So if you put a three in front of the H
, the equation is balanced.  See?” Marissa leaned over the table, filling the three into the chemical equation.

“But how did you know that?” John asked, turning his body toward hers on the couch.

Click.
They both heard the doors to the lounge close as the student walked out.

John lunged for Marissa. His lips on hers again, his hands in her copper hair, kissing her with every ounce of breath he seemed to have.  Marissa returned his kisses, her fingers spread out on his neck.

Creak!
They shot apart from each other again, as a new group of students walked in.

“How can you really not understand stoichiometry?” she asked him, smoothing down her hair.

“It’s balancing chemical equations.  Seriously, do you not pay
any
attention in class?”

“How can I? You’re sitting next to me,” he flirted.

“John, what are we doing?” Marissa looked into his deep blue eyes to show him she was serious.  He took a deep breath and rolled his eyes.

“Studying chemistry.  You are the chemistry major, shouldn’t you know what we are doing?” he asked, unable to keep the snark out of his voice.

John sighed.  “I don’t know.  I mean, we’ve been friends for the better part of a decade, best friends, really, and now, it’s like if we are in a room by ourselves for longer than a minute, we’re like newlyweds,” he answered, his eyes closed. “It’s like we just noticed that we belong to opposite genders,” he chuckled.

“Not quite.  We’re very PG-13.  Maybe a couple of high school kids?  But we aren’t in high school, anymore.  Besides, you and I have always pushed the limits of friendship…”

John lunged for Marissa, again, but she put her hand out to stop him.

“This didn’t matter that much last week, why do you want to know
now
?” John whined, yet sounded unexpectedly suspicious.

“I’m a girl.  I want to know these things,” she tried to rationalize.

“No, something has changed.  I know you, remember? Best friends?”

“
First
, yesterday, at the mall- When I picked out that skirt.  You got really possessive and said you wouldn’t let me out in public in it, like it was your choice. Like I was yours.” Marissa said. Her baby blue eyes shifted from his to her hands.  John’s friendship had always been like her security blanket, she didn’t want someone to treat her like she wasn’t in charge of the parts of her life she had some control over.

“Matthew called,” Marissa said in a small voice and she felt John tense beside her.

“Oh.  I
see
what this is now,” he replied, suddenly angry.  Marissa cringed back and tried to resist cowering.

“Do you?  I’m asking if we are headed
somewhere
or are we just messing around?” she whispered.

John was silent, his head down.  Nervously, Marissa looked up from her hands to see his head shaking back and forth. Was he searching for the words?

“We’re just messing around, Marissa,” he said, resolved, but sad.  “I mean, come on, you know I’m still in love with Ellen,” he cleared his throat, more calm than before.  “I’m actually supposed to go and visit her in a couple of weeks,” he said so fast, she wasn’t sure she’d heard him right.

“Okay,” she breathed, not sure if she was hurt or relieved. “He wanted me to come for a visit, but I didn’t want to if
this
is something.  He wants to spend some time together before I leave for the military in May and he leaves for college next fall.  He played me this song that he said was how he felt about how we left things last time…,” She paused, and then looked over to John, “I have had a blast with you these last few weeks, you know that, right?”

“I know, Marissa.  I have, too.  But this is just two friends helping each other out.  No matter what, we’ll always be friends,” he said, earnestly, looking into her eyes again.

“What’s the song?” he seemed to be bracing himself for the worst.

“
Speechless
, by Fenix Tx.  I’d never heard it before, but I couldn’t say no once he played it for me…”

“I haven’t heard it either,” he smiled.

“I’d never heard of the band, either, but I picked up their CD and I’m a fan now.  I’ll play it for you next time we hang out, but basically, he said there were things he should’ve said to me before, but didn’t.  He wants to make it up to me,” Marissa shrugged.

“So when are you going?  It’s been a year since you’ve seen Matthew, right?”

“Next weekend, I think.  I want to go before Halloween-probably.  I’m going to take the bus- maybe.  I don’t think my parents would let me take my truck,” she slumped in the couch, picking at the burgundy threads on the cushions.

“It’s yours, isn’t it? And you are over eighteen, right?  You weren’t some super genius that graduated high school at sixteen, right?” John laughed at her.

“I’m eighteen,” she shoved him, “but it’s the whole ‘our house, our rules’ crap,” Marissa sighed at the thought of how bad it could be, then tried to smile, “You know how strict they are, it’s like I’m going to get pregnant from talking to a guy on the phone, seriously.”

“You mean you
can’t
get pregnant from talking on the phone?  I’ve been trying it all wrong then” he tried to look shocked, but failed.

“Are you kidding?  If you could, we’d have a litter by now, but apparently, that rule doesn’t apply to
you
with my parents.  How
do
you appear so non-threatening to them?” She started to inspect him, tilting her head to one side, then the other, laughing.

“Like this,” he said, before finding her lips again. She leaned into his kiss, letting the feeling of it wash over her.  It felt like it always did…nice.

“We really should get back to studying our chemistry.” Marissa pushed away.

“I thought we were?” John said, deviously, pulling him to her again.

Soldier of Finance by Jeff Rose
Wild Spirit by Henderson, Annette
Infinity House by Shane McKenzie
The Immortals by S. M. Schmitz
Dimwater's Demons by Sam Ferguson
The Unreasoning Mask by Philip Jose Farmer
The Moment You Were Gone by Nicci Gerrard
Legacy by Tom Sniegoski
Murder on the Horizon by M.L. Rowland
Sparrow by L.J. Shen
Our partner