Read Never Have I Ever Online

Never Have I Ever 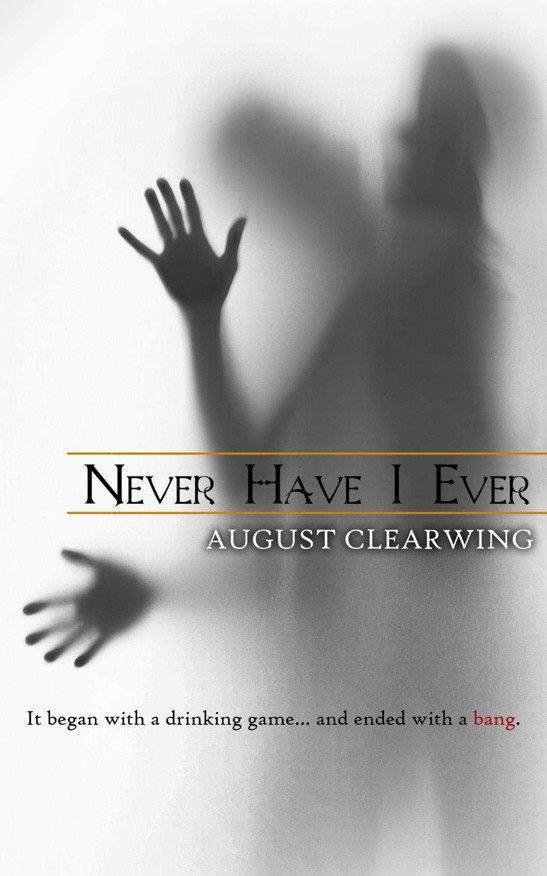 NEVER HAVE I EVER

No part of this publication may be reproduced, stored or introduced into a retrieval system, or transmitted in any form, or by any means (electronic, photocopying or otherwise) without written permission from the copyright holder except in the case of brief quotations embodied within critical articles and reviews.

This body of work is intended for ADULT audiences. It contains sexually explicit and violent scenes as well as graphic language, which might not be suitable for some.

This book is a work of fiction. People, places, situations, and events are the product of the author’s imagination. Any resemblance to actual persons, living or dead, or historical events, or specific locations, is purely coincidental or used fictitiously.

Credits:
Excerpt from “Raise Your Glass” by Pink //
LaFace
Records

Thank you for being my sounding board, good sir.

Special thanks to the readers of Lit, particularly those who followed the evolution of this novel from the beginning. A very special thanks to The Marvelous Mrs. G for introducing me to the drinking game that inspired this, for your encouragement, enthusiasm and more input than I could have ever hoped for from a Beta (practically Alpha) Reader. Also, thanks to Phoenix and Eric for your contributions as Beta Readers. It’s those little things that make a huge difference. Thanks to Mirage for your inspirational voice. Last but not least, thanks to all the sexy
Tumblr
blogs which gave me more ideas to play with than I could possibly fit into one book.

You are all phenomenal, and I love you.

People need stories more than bread itself; they tell us how to live, and why.

During the spring of twenty twelve my friend, Anya, finalized the details of her divorce from Lucas, her husband of five years. Eight if you counted the two years of dating and the yearlong engagement. Their separation had been a lengthy and arduous process filled with the pitfalls of the dissolution of any marriage.

Divorce is never pretty; love comes to an end, and neither party is left feeling particularly thrilled with the terms and conditions of things. Anya, however, was the exception to most rules. After being fucked around by lawyers and Lucas alike for six whole months—and, not in the happy, “Hey, let’s all get together and have an angry night of sex,” kind of way—Anya resolved to go out with a bang. And for Anya that meant only one thing: Massive. Fuck-off.
Party.

“I’m calling it Freedom Fest,” Anya declared after she finished explaining the plan.

She waved her hands in a grand gesture like it was some damned Broadway musical sign and she was the starlet with her name up in lights. She was, I guess, in most instances anyhow. She took the oversized sunglasses off her diamond-shaped face and spun them between her thumb and index finger.

“What do you think?”

I just sort of stared at her for a long while. When she interrupted me to divulge the details, I was sitting on my bed in my room in my apartment with a cornucopia of text books, legal pads and cheat-sheets sprawled across the comforter. I didn’t remember giving her a key and felt confident I didn’t leave the door unlocked.

“Earth to Piper, come in Piper.”

“How did you get in here?” I snapped. It came out sounding more accusing than I originally intended. I love Anya and all, but there’s a certain comfort level you have when you’re in your own apartment. People are not supposed to be able to waltz the hell in.

Anya produced the spare key, which she had tucked into her ample bra, and tossed it to me.
“Under the flower pot, really?
That’s just asking to become a statistic for a home invasion.”

I caught the key and pocketed it for the moment. “This is Pasadena, what’s the worst that could happen? Oh, a disgruntled nerd breaks in and rewires my surround sound, that’s what.” I was allowed to make those jokes because I was in my final semester at Caltech and knew far too many geeks. In fact, since I majored in physics, I counted myself among them.

Today was supposed to be my lounge day. Friday nights consisted of me, my cat Cocoa, and a cup of hot tea in a calm space where I could study at my own pace. My hair was a wreck. I haphazardly twisted it into a bun and held it in place with an alligator clip earlier that afternoon because where the hell was I going to go that anyone of import would see me. Wisps of strawberry blonde—let’s face it; more strawberry, less blonde—fought against me as the flyaway strands tickled my neck and bare shoulders. I began to hope Anya wasn’t planning to host her party tonight as my wide-necked gray sweater and plaid pajama bottoms did not a sexy socializing ensemble make.

I stared at the mountain of books in front of me. “Why couldn’t you call like a normal person?”

“Because you won’t say yes over the phone,” she groused.

“I’m not sure if I’ll say yes now. I mean, I’m happy for you—is it right to be happy for someone who’s happy to get divorced?”

“It’s just that I have a lot of work to do. Finals are right around the corner, and I have a funding project due for work.”

“Good God.
Piper, seriously.”
She dropped all hundred and thirty pounds of her weight onto the corner of the bed. I weighed a little more than her, but the sudden shift of motion made both me and my books jump a bit. Even the waves of dark brown hair bounced. She rolled her chocolate eyes from the door towards me. “How long do you think it will be before you turn into the Crazy Cat Lady?”

“Crazy Cat Lady with a Physics Degree,” I countered.

“Even so,” Anya began to count on her fingers. “You haven’t had a boyfriend in two years, you’d never consider a one night stand, so I know it’s been at least that long since you’ve gotten any, you live alone with your cat, and you care more about books than you do about human interaction. We haven’t gotten together to talk or party or even do lunch in ages. Those are all grievous signs.” She winked at me. “Trust me, I’m a psychologist.”

Anya was twenty six, two years older than me. She graduated with honors, Hell-bent on sociological change at an early age. She chose to work with kids, yet somehow always tried to give mock-diagnoses to her friends with the intention of getting them to do what she wanted.

I sighed and smiled at her. “You’re not wrong on any particular point, doctor.”

Her voice changed into something more disappointed and commanding.
“Piper.”

She reached over and patted me on my knee before getting up and starting for the door. “Be at my place tomorrow at seven. Bring booze, preferably a
really
large bottle.” She slipped her sunglasses back on and disappeared out the door.

With my concentration broken, all thanks owed to Anya’s sudden interruption, I folded up my study materials in resolute defeat of the weekend. A break from work wouldn’t be so bad, I figured. The human brain didn’t work well when studying for long periods of time anyhow. Shorter twenty minute bursts broken up with time to process recently consumed information worked better for long-term memory.

Maybe a couple of days without even looking at a mathematics text would kick-start my mind when I came back to it on Monday. Also, she was doing me a favor by making me socialize. I certainly did need more of it.

Alcohol and I never mixed well. Supposedly coming from strong Irish stock, one would think I could hold my own at any party. One would be wrong. After two or three stiff drinks
,  I
was more often than not ready to pass out, so when I bought the seven fifty of Stolichnaya
Elit
at the liquor store on the corner the next day the guy behind the counter looked at me a little funny. We had this discussion before because, at most, I only ever bought a half pint of anything. He expressed his concern for my well-being but after I assured him that I was not going to drink myself into a coma, we laughed it off, and he wished me a good time at the party.

I couldn’t remember the last time I went out somewhere, whether to a club or to a friend’s party, for much in the way of a social connection. My closet was looking pathetic and bare. The weather was warm enough now that I could get away with a sundress. Anya’s parties were never formal.
Ever.
If a man showed up in so much as a button down and slacks or a woman arrived with her hair done up then Anya would make a big deal out of it, saying the gathering was just a few close friends mingling and why bother going through all the trouble.

In the end
,  it
came down to sweatpants, my Little Black Dress, or one of the sundresses. I chose my favorite; a white dress that stopped just above my knees. It had a splash of tie dyed pink and orange on one side with orange shoulder straps to match. The dress was a little large for me. I purchased it a couple of years ago when the inevitable freshman fifteen crept up on me. Since then I lost ten of those pounds, all in my waist it appeared; my hips were still full and curvy. I rather liked that, though.

Curves weren’t undesirable for a girl my height. At five-foot-five, I could wear the weight well when put in the right places. Child-bearing hips, a soft, flat stomach and decently proportioned breasts on the high end of C-cup. One of my former boyfriends described my butt as “bitable”.