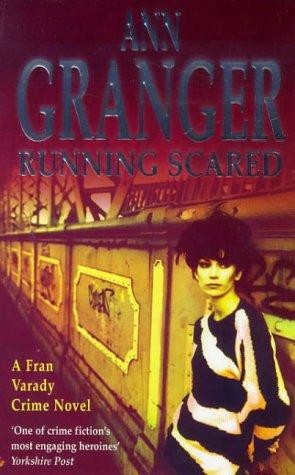 The right of Ann Granger to be identified as the Author of the Work has been asserted by her in accordance with the Copyright, Designs and Patents Act 1988.

First published as an Ebook by Headline Publishing Group in 2010

To my son, Tim, who gave up his free time to help me in my research, with thanks

I’m not the sort of person who goes out of her way to find trouble. It’s just that trouble always seems to find me. Generally, I just try to make it from one day to the next and avoid hassle. I don’t know why it never works out like that. It’s so unfair, and especially as Christmas approaches and everyone’s looking forward to the holiday. But my luck being what it is, that’s when I ran into my latest set of problems. Because if you can be certain of anything in this world, it’s that you never know what life’s going to hit you with next.

It was a cold, rainy morning and I was helping out my friend Ganesh in his uncle’s newsagent’s shop when disaster struck. Ganesh not only works for his Uncle Hari, he also lodges with him over the shop. I don’t know whether Hari really is an uncle or some other kind of relative, but uncle’s what everyone calls him, even me. Hari is a nice man but nervous and fidgety and that gets Ganesh down. So when Hari announced he was going on an extended family visit to India, and in his absence Ganesh was to be left in sole charge of the shop in Camden, Gan just about danced round the place for joy.

I was pleased for Ganesh too, because it was high time he had a chance to run something without interference from his family. All his life he’s helped out in shops run by relatives. He’d helped his parents in their Rotherhithe greengrocery until they’d been dispossessed by the council, who were redeveloping. Now they run a fruit and veg place out of town at High Wycombe. It’s very small and they don’t need Ganesh, nor is there any accommodation for him, so that’s why he’s currently with Hari. I sometimes ask Ganesh why he puts up with being passed round the family like this, filling in where needed, but he always says I don’t understand. Too right, I tell him, I don’t. Explain it to me. Then he says, what’s the point?

He’s really capable and if he could just get his own place, he’d be fine. I wish he’d give up the dream of being in charge of a dry-cleaner’s, though. He has a crazy idea he and I could run something like that together. Not a chance, I tell him. I don’t want to spend my life handling other people’s dirty clothes and I hate the chemical smell of those places, and the steam.

However, I didn’t mind giving Ganesh a hand in the newsagent’s while Hari was away, especially in the mornings, which is always the busiest time, though with Christmas coming up things would start getting really hectic pretty soon. Hari had given Ganesh authority to hire me as a part-timer and I needed the money. But I want to make it clear that one day I’m going to be an actress – I nearly finished a course on the Dramatic Arts and everything once – but in the meantime I take any legitimate work going, including being an informal enquiry agent.

So, off went Hari, leaving Ganesh three pages of minutely detailed instructions in a curly alphabet and I turned up on my first day bright and early at eight o‘clock. Ganesh had been there since six, but I have my limits. Everything went swimmingly for a bit and I was enjoying being a genuinely employed person. It was quite interesting in the shop and at the end of the first week I got my pay packet and felt I was a regular member of the public at last. Only ‘last’ was what it wasn’t going to do. I should’ve known.

It was on the following Tuesday that things started to go wrong. The week had begun all right. Gan and I had spent Sunday putting up Christmas decorations in the shop. Ganesh’s idea of a decorative colour scheme is red, lots of it, and gold, even more of that, enlivened by an occasional flash of hot pink or vibrant turquoise. When we’d finished with the shop it looked fantastic – perhaps rather more Diwali than Christmas, but Gan and I were really chuffed with it.

All Monday we gloried in the compliments from customers. Then, on Tuesday, a postcard of the Taj Mahal arrived from Uncle Hari and the atmosphere changed. Ganesh stopped buzzing cheerfully and skulked around beneath the crepe paper chains. He’d propped the card on the gold tinsel-trimmed shelves behind the counter along with the cigarettes, and kept giving it hunted glances.

I’d already guessed that Ganesh was up to something because he’d been making furtive phone calls over the previous week and looking pleased with himself. I knew it wasn’t just the approach of festivities and seasonal sales. I could see he was dying to tell me, especially during Sunday when we’d been pinning up the decorations, but I wasn’t going to encourage him although I was longing to know. With the arrival of the postcard, he stopped looking smug and became clearly worried. Eventually, he came clean.

We were having our coffee-break. The early morning rush had thinned, there was no one in the shop for the moment, and the emptiness of the rainswept pavement outside suggested things might stay quiet all day until the usual early evening flurry of trade. We didn’t have to go upstairs to the flat to make the coffee because we had an electric kettle downstairs which I filled with water in the washroom.

The building’s old and long ago converted from what must once have been quite a nice house. There are two ways up to the flat, one from the shop, using the former back stairs, and a separate one from the street. The downstairs washroom was at that time a museum of antiquated plumbing and fixtures, tacked on to the back of the building in what must have seemed at the time the height of modernity. It was all as clean as it could be kept given its general state, but that was terminal. The washbasin was hanging off the wall. The tap dripped. Any wall tiles were loose and cracked and the floor tiles had gaps between them. The vent for the extractor fan was clogged with dust and dead flies. The lavatory cistern was operated by a chain which had lost its handle. It clanked furiously whenever it was flushed and the cistern lid was loose so if you didn’t watch out, there was always a chance it would fall down and brain you. The loo itself was the
piece de resistance.
An original, no kidding, patterned all over with blue forget-menots. It had a wooden seat with a crack in it which pinched your bum. I tell you, anyone ventured into that washroom at his peril. I called it the Chamber of Horrors.

Ganesh, to be fair, had been grumbling to Hari about the state of the washroom ever since he’d moved there. But whenever Hari was tackled, he always replied that he wasn’t a rich man who could afford to replace everything just like that. ‘Besides,’ he’d declare, ‘look at such a beautiful lavatory pan. Where would I again get such a wonderful object?’ He usually ended up by promising to get a new tapwasher, but even that got put off indefinitely.

On this particular morning, I steered my way to the counter carrying a mug of coffee in either hand and said crossly, ‘The least you can do, Gan, while Hari’s away, is fix that dripping tap.’

At that, Ganesh, who since the postcard’s arrival had been brooding darkly in a corner like Mr Rochester on a bad day, brightened up. He chortled, rapped out a rhythm on the counter with his palms and, just as I was deciding he’d gone bonkers, let me into his secret.

‘I can do better than that, Fran. I’m going to get the whole thing done out, ripped out, fixed up, everything brand-new, while the old bloke’s away.’

He beamed at me. I stood there, slopping coffee and gawping. I’d only set my sights on the new washer. Ganesh must have got
Homes and Gardens
down from the shelf and let it go to his head.

‘Hari won’t know, not until he gets back and by then it’ll be a whatsit,
fait accompli,
that’s what they call it.’

‘They call it a screaming hysterics,’ I said. ‘That’s what Hari will have when he sees the bill.’

Ganesh took his coffee from me, stopped looking smug, and started to look obstinate. ‘He left me in charge, right? I’m empowered to sign cheques on the business and everything, right? So I’m going to get it done and he can make as much fuss as he likes. What’s he going to do, sack me? I’m family. He can’t. Anyway, I know the stingy old blighter. He always carps at spending money, but once it’s gone, he shrugs it off. When he sees how good it looks and how reasonable the cost was, he’ll get over it. It’s improving the property. That has to be good. And if he still argues, I’ll tell him Health and Safety at Work rules didn’t allow the old one. They probably don’t.’

‘It’ll cost a bomb,’ I said, playing devil’s advocate. Someone had to. He was too full of it.

‘No, it won’t. I’ve got a really reasonable quote. Dead cheap. Bloke can start work on Friday and he’ll be done, finished, gone in days, by the end of next week, certain.’

I perched on the stool behind the counter and sipped my coffee. It all sounded a bit too easy to me. ‘How come it’s going to be so cheap?’ I asked. ‘All the existing fittings will have to go, new ones put in. The extractor fan has never worked to my knowledge so that’s got to be replaced. The plumbing’s knackered. The walls will have to be painted, the floor retiled . . .’

‘It’s all taken care of,’ said Ganesh airily. ‘And he’ll take away the old fittings and rubbish for me and everything.’

‘Who will?’ I asked suspiciously.

I spilled my coffee. ‘Hitch? Are you mad?’

‘He’s cheap,’ I said, ‘because all the stuff he uses has been knocked off from a builder’s yard somewhere.’

‘No, it hasn’t – or this won’t be. I checked that with him first. Think I’m daft? It’s all on the level. He’s given me the name of his supplier and everything. I can ring them up – and I will, before he starts. I’m not daft, Fran.’