Read The Singularity Is Near: When Humans Transcend Biology Online

The Singularity Is Near: When Humans Transcend Biology 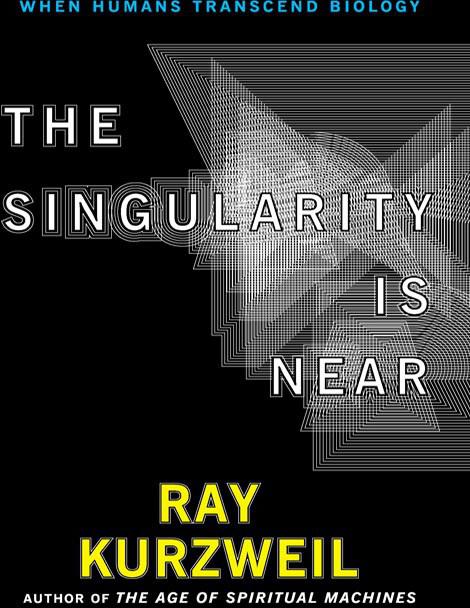 Praise for
The Singularity Is Near

“Anyone can grasp Mr. Kurzweil’s main idea: that mankind’s technological knowledge has been snowballing, with dizzying prospects for the future. The basics are clearly expressed. But for those more knowledgeable and inquisitive, the author argues his case in fascinating detail. . . .
The Singularity Is Near
is startling in scope and bravado.”

“Filled with imaginative, scientifically grounded speculation. . . .
The Singularity Is Near
is worth reading just for its wealth of information, all lucidly presented. . . . [It’s] an important book. Not everything that Kurzweil predicts may come to pass, but a lot of it will, and even if you don’t agree with everything he says, it’s all worth paying attention to.”

“[An] exhilarating and terrifyingly deep look at where we are headed as a species. . . . Mr. Kurzweil is a brilliant scientist and futurist, and he makes a compelling and, indeed, a very moving case for his view of the future.”

“Kurzweil links a projected ascendance of artificial intelligence to the future of the evolutionary process itself. The result is both frightening and enlightening. . . .
The Singularity Is Near
is a kind of encyclopedic map of what Bill Gates once called ‘the road ahead.’ ”

“A clear-eyed, sharply-focused vision of the not-so-distant future.”

“This book offers three things that will make it a seminal document. 1) It brokers a new idea, not widely known, 2) The idea is about as big as you can get: the Singularity—all the change in the last million years will be superceded by the change in the next five minutes, and 3) It is an idea that demands informed response. The book’s claims are so footnoted, documented, graphed, argued, and plausible in small detail, that it requires the equal in response. Yet its claims are so outrageous that if true, it would mean . . . well . . . the end of the world as we know it, and the beginning of utopia. Ray Kurzweil has taken all the strands of the Singularity meme circulating in the last decades and has united them into a single tome which he has nailed on our front door. I suspect this will be one of the most cited books of the decade. Like Paul Ehrlich’s upsetting 1972 book
Population Bomb
, fan or foe, it’s the wave at epicenter you have to start with.”

“Really, really out there. Delightfully so.”

“Stunning, utopian vision of the near future when machine intelligence outpaces the biological brain and what things may look like when that happens. . . . Approachable and engaging.”

“One of the most important thinkers of our time, Kurzweil has followed up his earlier works . . . with a work of startling breadth and audacious scope.”

“An attractive picture of a plausible future.”

“Kurzweil is a true scientist—a large-minded one at that. . . . What’s arresting isn’t the degree to which Kurzweil’s heady and bracing vision fails to convince—given the scope of his projections, that’s inevitable—but the degree to which it seems downright plausible.”

“[T]hroughout this tour de force of boundless technological optimism, one is impressed by the author’s adamantine intellectual integrity. . . . If you are at all interested in the evolution of technology in this century and
its consequences for the humans who are creating it, this is certainly a book you should read.”

“Ray Kurzweil is the best person I know at predicting the future of artificial intelligence. His intriguing new book envisions a future in which information technologies have advanced so far and fast that they enable humanity to transcend its biological limitations—transforming our lives in ways we can’t yet imagine.”

“If you have ever wondered about the nature and impact of the next profound discontinuities that will fundamentally change the way we live, work, and perceive our world, read this book. Kurzweil’s
Singularity
is a tour de force, imagining the unimaginable and eloquently exploring the coming disruptive events that will alter our fundamental perspectives as significantly as did electricity and the computer.”

—Dean Kamen, recipient of the National Medal of Technology, physicist, and inventor of the first wearable insulin pump, the HomeChoice portable dialysis machine, the IBOT Mobility System, and the Segway Human Transporter

“One of our leading AI practitioners, Ray Kurzweil, has once again created a ‘must read’ book for anyone interested in the future of science, the social impact of technology, and indeed the future of our species. His thought-provoking book envisages a future in which we transcend our biological limitations, while making a compelling case that a human civilization with superhuman capabilities is closer at hand than most people realize.”

—Raj Reddy, founding director of the Robotics Institute at Carnegie Mellon University and recipient of the Turing Award from the Association for Computing Machinery

“Ray’s optimistic book well merits both reading and thoughtful response. For those like myself whose views differ from Ray’s on the balance of promise and peril,
The Singularity Is Near
is a clear call for a continuing dialogue to address the greater concerns arising from these accelerating possibilities.”

Ray Kurzweil is one of the world’s leading inventors, thinkers, and futurists, with a twenty-year track record of accurate predictions. Called “the restless genius” by
The Wall Street Journal
and “the ultimate thinking machine” by
Forbes
magazine, Kurzweil was selected as one of the top entrepreneurs by
Inc
. magazine, which described him as the “rightful heir to Thomas Edison.” PBS selected him as one of “sixteen revolutionaries who made America,” along with other inventors of the past two centuries. An inductee into the National Inventors Hall of Fame and recipient of the National Medal of Technology, the Lemelson-MIT Prize (the world’s largest award for innovation), thirteen honorary doctorates, and awards from three U.S. presidents, he is the author of four previous books:
Fantastic Voyage: Live Long Enough to Live Forever
(coauthored with Terry Grossman, M.D.),
The Age of Spiritual Machines
,
The 10% Solution for a Healthy Life
, and
The Age of Intelligent Machines
.

The Singularity Is Near

First published in the USA by
Viking Penguin, a member of Penguin Group (USA) Inc.

All rights reserved. No part of this publication
may be reproduced, stored in a retrieval system, or
transmitted, in any form or by any means, electronic,
mechanical, photocopying, recording or otherwise,
without the prior permission of the publisher.

The right of Ray Kurzweil to be identified as the Author of
the Work has been asserted by him in accordance with
the Copyright, Designs and Patents Act 1988.

The Power of Ideas

The Intuitive Linear View Versus the Historical Exponential View

Epoch One: Physics and Chemistry
.
Epoch Two: Biology and DNA
.

The Singularity Is Near

A Theory of Technology Evolution:
The Law of Accelerating Returns

The Nature of Order
.
The Life Cycle of a Paradigm
.
Fractal Designs
.
Farsighted Evolution
.

The Life Cycle of a Technology
.
From Goat Skins to Downloads
.

Moore’s Law and Beyond

The Letter by Owens, Sandra
Graynelore by Stephen Moore
Fatherless: A Novel by Dobson, James, Bruner, Kurt
Night and Day (Book 3): Bandit's Moon by White, Ken
Murder in Ukraine by Dan Spanton
Buying His Mate by Emily Tilton
Night of Vengeance by Miller, Tim
9781631053566SpringsDelightBallNC by Kathleen Ball
The Whispers of the Fallen by J. D. Netto
Accepting His Ways (Quinlan O'Connor Book 2) by Alyssa Bailey
Our partner