Read The Vampire and the Man-Eater Online

The Vampire and the Man-Eater 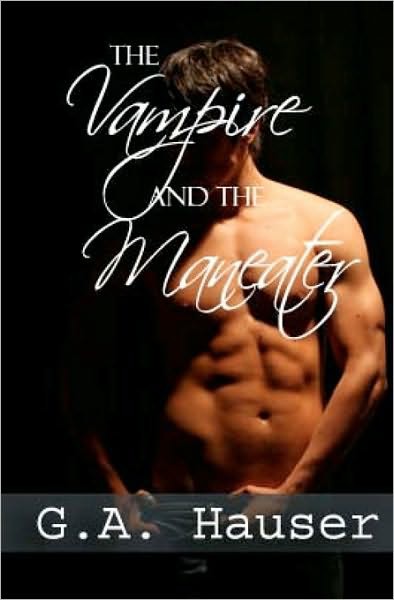 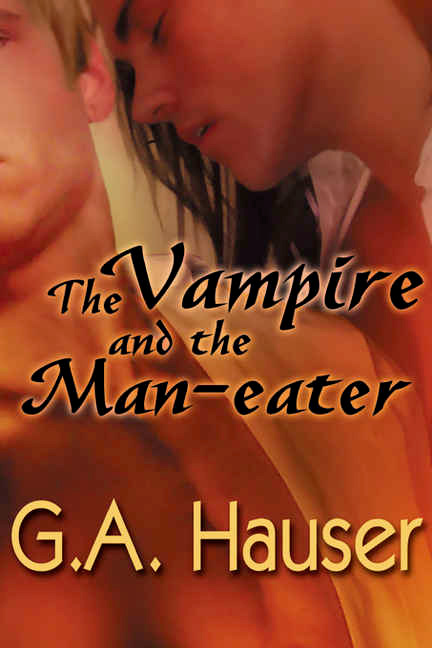 Other works by G.A. Hauser:

This is a publication of

THE VAMPIRE AND THE MAN-EATER

eBooks are
not
transferable. They cannot be sold, shared or given away as it is an infringement of the copyright of this work.

THE VAMPIRE AND THE MAN-EATER

Other available formats (no ISBNs are assigned): PDF, PRC & HTML

This is a work of fiction and any resemblance to persons, living or dead, or business establishments, events or locales is coincidental.

All Rights Are Reserved. No part of this may be used or reproduced in any manner whatsoever without written 5

permission, except in the case of brief quotations embodied in critical articles and reviews.

"Eli, you learn all your life to obey the rules. But as you get older you learn that there are no rules."

"Is that your new credo, Brock? No rules? Or one set of rules for some and another for you?"

A sly smile on his lips, Brock sipped his rum and Coke, staring up at a scantily clad young man gyrating in a cage.

Male bodies writhed together on the floor to ear-shatteringly loud music. Gulping down the alcohol and getting rid of his glass, Brock entered the chaos. Moving his hips to the beat, his hands over his head as he danced, he narrowed his eyes as the intensity of the rhythm bass rattled through his ribs.

Standing under the cage, staring up at the glistening young g-string-clad man in the box, Brock admired his hairless physique imagining him to be no older than twenty-one or twenty-two. He caught the man's eyes and was treated to a special dance. Brock loved the attention.

Someone brushed up behind him. Looking back, Brock found a handsome blond without a shirt, showing off his muscular build and brushing his pelvis against Brock's butt as they danced. Grinding back, Brock had a nice head buzz from the booze and was dizzy from the scent of male testosterone.

The blond wrapped around Brock's hips, smoothing his fingers down Brock's thighs. After giving the go-go boy a wink, Brock held the handsome blond by the hand and escorted him off the floor. Leading him to the men's room, Brock cornered the man in a back stall, trapping him against 7

his body, connecting to the man's lips. After kissing, tasting the alcohol on the handsome man's mouth, Brock leaned back so he could stare at him. As he gazed into those hazy blue irises, Brock felt his slacks being opened and his zipper undone. Closing his eyes, Brock held onto the frame of the stall as the blond dropped to his knees and sucked him. Deep inside a swoon, he felt another set of hands. Someone behind him dragged his slacks down his ass. A tongue began lapping at his asshole. Brock clenched his jaw and came in the blond's mouth. When he felt something other than a tongue pushing between his legs, he twisted around and shoved the man back, laying him flat out on the floor. Not missing a beat, he cupped the blond's jaw bringing him to his lips for more kisses. Reaching into the handsome blond's jeans, Brock found his cock seeping with pre-come juices. Opening his zipper, jerking him off, sucking at the man's mouth, Brock once again felt hands on his exposed ass. As they massaged Brock's bottom, licking at his skin, Brock heard the blond grunt and pulled back from his mouth to watch his orgasmic expression. Just as the blond shot his load, Brock twisted to the side. The come sprayed into the face of the man who had been licking at his ass cheeks.

Hoisting himself up on the metal frame of the stall, Brock hopped over the second man, yanked his slacks up, and washed his hands and face at the sink. Without looking back, he left the bathroom and returned to the dance floor.

Gyrating towards the go-go boy he had admired, Brock gave him a smile and enjoyed the music and the heat of the bodies around him. A set of eyes caught his in the crowd.

Thinking the man was fantastic, Brock tried to locate him.

Making his way closer to the area he had last seen the man, Brock couldn't find him.

Another man began grinding his cock into Brock's ass.

Looking over his shoulder, seeing the man wasn't his type, Brock shoved him away. Slowly, moving through the tightly packed group, Brock tried to find that face again. It was so spectacular he wanted a piece. After he had checked the bathroom and the lobby, Brock gave up. Men usually found him. It was rare for him to go looking.

Heading back to the bar, Brock shouted to get his order heard in the noise. Holding a hundred dollar bill out, the bartender gave Brock a wicked smirk. Brock thought he was adorable in his outfit: a shirtless collar with a bowtie, white cuffs and black spandex pants. Craning his finger to him, Brock went as if to whisper in his ear, licking the man's cheek instead. "Keep the change."

The bartender grabbed Brock's jaw and kissed him hotly over the counter.

With a gleam in his eyes, the bartender mixed Brock's drink, handing him the glass and a card with his phone number on it.

Brock smiled adoringly at the charming man, pocketed the card, and surveyed the crowd. That face appeared between two topless dancing men. Jolting from the gaze, Brock stretched on his toes to keep the man in sight. "Oh, no you don't." Brock hurried to catch him.

Standing near the exit, Brock thought he had lost him again. Suddenly he noticed the man, all in black, outside in 9

the misty rain, leaning against the wall of a building across the alley.

Chugging his drink, Brock set his glass down and hurried out of the club. A line of men had formed to get in, winding down the sidewalk and around the corner of a wall.

When he was face to face with the mysterious man, Brock felt a catch in his throat. He had never seen a man quite as fantastic as this one, and he had seen so many, many pretty men.

Brock went for his mouth. In the damp misty rain, Brock dug into the man's beautiful, thick, long black hair. The contact sent him into heat. Pulling back to stare, to remind himself that this person was truly incredible, Brock hissed,

"You're coming home with me."

The man gave him a wry smile.

He never took strange men back to his place. Never. Nor did he go to theirs. It was against his rules. But there were no rules tonight.

Without a word, Brock grabbed the man's hand and flagged down a taxi. Getting in, pulling the gorgeous man inside with him, Brock told the driver his address. Once they were moving, Brock pushed the man back on the seat and devoured the man's mouth, rubbing his hands all over the man's torso, unconcerned for what the driver thought. He never did care what others thought of his sexual preference.

When the cab stopped, Brock sat up, wiping his mouth with the back of his hand. He removed another hundred from his wallet and tossed it on the front passenger seat. Opening the door, Brock held the man's hand and raced to his 10

penthouse. Once they were closed inside the elevator, Brock again assaulted this god, pressing him against the wall of the elevator, rubbing his hands over his chest as if he were possessed. The contact of this man was making him crazy with desire as the man seemed to be allowing Brock to have his way.

Reaching the top floor, Brock clasped the man's hand, opening his door and shoving it back. The moment they entered, Brock didn't waste a moment. Stripping the man's shirt off his shoulders, sucking at his tongue and teeth, Brock wanted his skin. "You are fantastic," Brock crooned between kisses.

The man's clothing leaving a trail to Brock's bedroom, Brock had him topless and standing near his bed. Panting, stepping back to kneel and help the man off with his boots, Brock stripped him of his lower clothing. "Jesus Christ, you are too much." Brock gulped the air in excitement. Frantically ripping off his own clothing, when he was naked he dove on the man and tackled him back on the bed, squirming on his body, sucking at his mouth. After a seductive groan of longing, Brock parted from the kiss to inhale a much needed breath. Brushing the man's hair back from his eyes, Brock stared at them in awe. They were as green as emeralds and shimmered like a prism. "What do you want? Tell me? Take what you want." Brock had never said that to a soul. Brock Hart took what
he
wanted. It never occurred to him to care what anyone else's needs were.

The man cupped Brock's face, bringing him back for another kiss. Climbing over him, Brock straddled his legs, 11

rubbing their cocks together. The friction, the chills from this man's lips sent Brock onto another plane. The lightness in his head was foreign. Maybe it was the booze. Perhaps it was the intensity of the beauty of this man. Whatever it was, Brock had never felt anything like it. And he'd been with so many men.

The man finally responded to Brock's sexual intensity, gripping his cock with a very strong hand. Brock gasped for air and closed his eyes as his body reacted. The man moved to kneel with him, so they were both upright on the bed. The man didn't release his hold on Brock's cock. The touch was intense, like voltage from a plug, vibrating with a mixture of pure pleasure and passive pain.

Mr. Darcy's Daughter by Collins, Rebecca Ann
Event Horizon by Steven Konkoly
And We Stay by Jenny Hubbard
Shadow Waltz by Amy Patricia Meade
Cowboy with a Cause by Carla Cassidy
The Clayton Account by Bill Vidal
Off Limits by Lindsay McKenna
The Hundred-Year-Old Man Who Climbed Out of the Window and Disappeared by Jonas Jonasson
The Unincorporated Future by Dani Kollin, Eytan Kollin
The Drowning Spool (A Needlecraft Mystery) by Ferris, Monica
Our partner