Locking You (The Boston Kirkpatrick's #2) 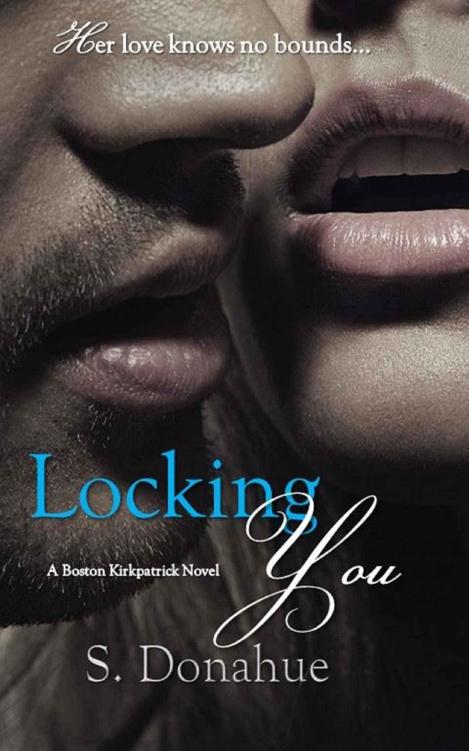 Locking You
is
a work of fiction. Names, characters, places, and incidents either are the product of the author’s imagination or are used fictitiously. Any resemblance to actual persons, living or dead, events, or places is strictly and entirely coincidental.

This is a self-published work. All rights belong to the author S. Donahue. If you are a publishing house with interest in the author or this book, please contact S. Donahue at
[email protected]

Please note that no parts of this book may be copied, used, or redistributed in any manner without written consent from the author.

Garamond and Georgia Font used for Kindle only.

In all the world, there is no heart for me like yours.

In all the world, there is no love for you like mine

They say people come into your life for a reason. Brendan Kirkpatrick came into mine so that he could become my husband. Oh…and so we can have hot sweaty sex every day of our lives.

We met a year ago yesterday. In October, at the Red Sox game, he proposed to me. I was totally not expecting it. We wanted to wait to plan the wedding and just enjoy being together, but pressures from both families forced us to pick a date and plan away. We decided it was reasonable since I almost died last year in the line of duty protecting Brendan’s business… well, former business. I went undercover as a stripper and was shot by another stripper drug lord named Roxy. Come to find out she has a child with Brendan’s assumed to be dead brother, who is actually indeed alive.

Needless to say, Brendan and I have been through a lot in our lives, but we are ready to become one. We have been living together for the past year and it has been great. Brendan is so caring and loving. We do everything together. We try to make sure that we have dinner together every night at six p.m. Sometimes my schedule gets in the way, but for the most part we regroup together at that time.

I’m sitting at the kitchen table eating my magnificent eggs that Marco prepared. He is telling me all about his kids and all the funny things that happened at school yesterday. I was laughing out loud when Brendan came into the kitchen looking dapper in a navy blue suit with his collar open. His Armani cologne vaporized the room. He grabs a cup of coffee and kisses me on the cheek before joining me at the table.

“Hey gawgeous,” he says with his sexy smile.

I still get tingles all over my body when he calls me that.

“Hi,” I say back smiling and waving really cute in a flirtatious way.

While Marco has his back to us, horn dog is pointing at the table mouthing that he wants me on top of it. I roll my eyes at him. The damn chef is two feet away. I mouth back, “Control yourself.”

“I have a meeting downtown for a perspective new business.”

“Your brother is a recovering gambler. It wouldn’t be good for him. It’s temptation. He just moved back to Boston two months ago.”

“I know you’re concerned about Connor, but we talked about it and he’s okay with it. He’s a big boy.”

“Who faked his own death?”

“So, is this being built or does it exist,” I ask breaking apart a piece of bacon as we speak.

“It already exists, but the current owner drove it to the ground. I’m going to buy it, build it back up and make it successful. I have a lot of plans for it. We are possibly going to open a night club inside of it called Hush II.”

“You hated the business, that’s why you sold Hush I.”

“Connor is going to own it and run it out of the casino.”

“I don’t like this idea. You’re usually a smart business man.”

“What’s wrong with you this morning?”

“Nothing. I love Connor like a brother. He’s great, but I just don’t want to see you back in the same situation as before.”

“Sweetie, let me have the meeting first. I don’t have to make a decision today. This investment will set us up for the future.”

“You already have millions.”

“Correction- we have millions and we will have billions.”

“Baby, money isn’t everything. If you were poor, I would still love you.”

“I know. That’s why I love you so much. Trust me. I’m making the right decision.”

“If you tell me Billy is going to manage it, I will be speechless.”

“Why would anyone tell him anything?”

“He’s clean and straight. He’s sorry for everything that happened. He wants forgiveness and he’s trying to make a better life for himself.”

“You are so,” Marco says from the stove.

“Thanks Marco,” I say giving him the thumbs up sign.

I think this is a bad idea. I don’t want to tell him what to do. I’m in a tough position. It’s not my money, although he says it is. I don’t even spend it. He gave me a black American Express card and I never used it. He deposited extreme amounts of money into my bank account. Who needs that much money? The only money I use is for the wedding.

“I just want you to make the right decision.”

He comes over and gives me a hug and lifts me in the air. As he puts me down on the ground, he kisses me. Marco is totally used to us by now.

“Mmmm… Go save the world and I’ll see you back here at six.”

“I’m trying to get done work early today. I have to pick up our wedding bands.”

“We can meet here at three,” he suggests.

“Okay see you then. Love you.”

He leaves the kitchen. I watch him go. I don’t have a good feeling about this deal, but the same way he couldn’t tell me to quit my job, is the same way I can’t tell him what to do. Are we supposed to start making each other’s decisions or do we stay independent? Marriage means we work together to come up with the best possible options.

My work phone rings taking me out of my thoughts.

“Get the fuck out of here,” I yell hitting my hand on my forehead.

I have to call Brendan now. I dial his cell.

“Hey Sweetie,” he says on the first ring.

“On my way to the meeting.”

“Is it at the hotel/casino?”

“No, It’s with the banker and investor. Why?”

“I just got called to the casino because the owner apparently committed suicide.”

“You got to be fucking kidding me.”

“No, I’m leaving now. Did they cancel the meeting yet?”

“They’re beeping in now. Let me get this. I’ll call you back.”

I jump in my police vehicle and throw my siren on. Driving through this traffic in the morning is mayhem. I can see this is going to be a long day. The rings are going to have to wait.

I can’t believe this is fucking happening. I met with the owner, Kieran O’Malley, three days ago. He was willing to sell the property and business. He was in great spirits and said he was planning on relocating to Florida with his wife to start over. Why would he kill himself? He clearly didn’t look like someone who was suicidal.

I just hung up the phone with the investor, Macklin Carney. He said we would need to put this transaction on hold until we find out what is going on. The property was in foreclosure, but was still owned by Kieran. There were many people involved due to the status. If Kieran didn’t come up with the money, he would lose everything. That is where I came in. He decided to sell the business instead of losing it. The problem now is that the business will go to the wife and she has to decide if she will sell or not, unless he has a will stating otherwise.

I’m calling Joella to tell her about the change of events. She isn’t picking up. I leave her a voice message.

“Hey sweetie, my meeting was cancelled. I’m heading to my office. Call my cell if you need me. Love you.”

I head to Kirkpatrick Enterprise. It isn’t a major company, but it’s growing. I have a Human Resources department, Customer Service Team, Billing, etc. I set this up so my businesses will run smoothly. If any tenants have any issues, they just need to call customer service and they will send someone out right away to fix any issues.

Jocelyn is in her office when I arrive.

“Why are you here? I thought you had a meeting,” she asked.

“I did until the owner of the company killed himself.”

“Since I have some free time, I will review the reports you put on my desk yesterday.”

I sit in my chair wondering why someone would take their own life. The business may have been failing, but he could have bounced back. He was still young at forty years old. He was only 3 years older than me. I thought he was a really nice guy. I’m taking this rather hard. I need to focus on something else. Maybe I’ll focus on my fiancés tight ass. How I wish I was gripping it right now from behind. Just thinking of her makes me so horny. My cock is starting to stiffen at the thought of her riding me tonight.

My phone buzzing on my desk takes me out of my glorious daydream. It’s Brad Roberts. He is the husband of Joella’s cousin Gia. We met a couple times at family functions. We are teaming up to buy a business in Wildwood, NJ, a shore resort town. We have big plans and should make a profitable turnaround. This dude is filthy rich. He could be the next Donald Trump.

I pick up the phone because right about now I need good news.

“Nothing much, man. I wanted to check and see if you and Joella are still coming to Atlantic City this weekend.”

“Yes, I hope so. We’ll be flying in if we do. We need to get away. It has been crazy with all the wedding planning. We need time to just relax. I booked our room at the Borgata.”

“Oh good, we are staying there too. I think the ladies set it up for us to be at the same hotel.”

“Great. While they are at the spa on Sunday, we can drive over to Wildwood so you can look at the property.”

“That would be great. We are going to be arriving at the Atlantic City airport on Friday night.”

“Sounds like a plan. We can pick you up when you land.”

“Thanks so much. Listen I have to go Joella is beeping in on my other line.”

I flash over to Joella.

“Hey sweetie, I called you. I was just talking to Brad. We’re still on for Friday?”

“Kieran O’Malley was murdered. Stay where you’re at. I’m on my way over. I need to talk to you.”

“What the fuck, Joella?”

This is definitely not good news.

The Missing Monarch by Rachelle McCalla
Chance by Nancy Springer
Bloodguilty by K.M. Penemue
Burned by Ellen Hopkins
Zan-Gah: A Prehistoric Adventure by Allan Richard Shickman
Burying Ariel by Gail Bowen
After the Dance: My Life With Marvin Gaye by Jan Gaye
Hunted (Dark Protectors) by Zanetti, Rebecca
Forever the Colours by Richard Thomas
Letters of Love (Lessons in Love) by Clarissa Carlyle
Our partner