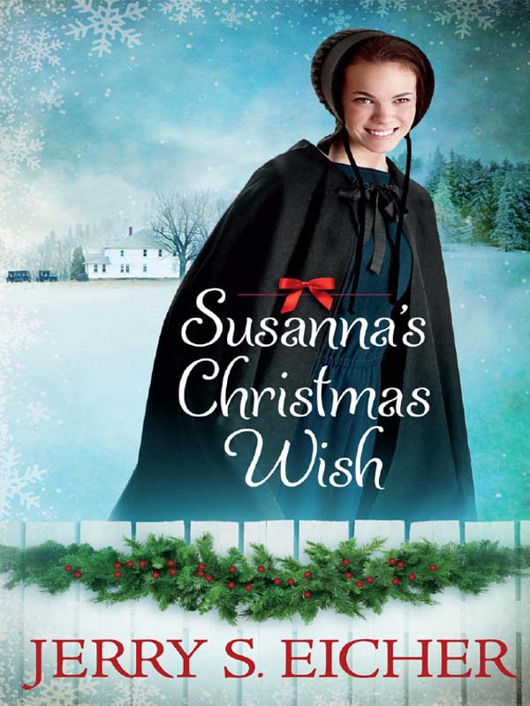 All Scripture quotations are from the King James Version of the Bible.

This is a work of fiction. Names, characters, places, and incidents are products of the author’s imagination or are used fictitiously. Any resemblance to actual persons, living or dead, or to events or locales, is entirely coincidental.

All poetry in this book was written by Jerry Eicher, © 2012.

All rights reserved
. No part of this publication may be reproduced, stored in a retrieval system, or transmitted in any form or by any means—electronic, mechanical, digital, photocopy, recording, or any other—except for brief quotations in printed reviews, without the prior permission of the publisher.

T
his book is dedicated to the other side of the story: To all the Amish girls who have been left behind, to their love, and to their life built from the ashes of what was lost.

I was more the scribe than the writer on this one. This story appeared with only the minimum of digging on my part. And thanks to the editors at Harvest House, Nick Harrison and Barb Gordon. They touched the story with great tenderness, adding beauty and grace.

S
usanna Wagler stood by the living room window watching Herman’s broad shoulders as he guided the team of horses into the field. Was he really her husband? The thought raced through her mind, and she pushed it away. These were not the thoughts a woman of God should have. Of course Herman was her husband. They had said the marriage vows in front of Bishop Jacob not three weeks ago. She could still hear Bishop Jacob’s voice intoning, “Do you, sister Susanna, believe
Da Hah
has given our brother Herman to you as your husband?”

The words had hung in the air only for a moment before she whispered, “
Yah
.”

Herman was the husband
Da Hah
meant for her. She had been certain of it. As certain as she could be. He was a man deeply loved by the community for his honest ways, his open face, and his dedication to the faith of the fathers. This was why she had said
yah
to Herman’s first timid request when he’d asked her home from the hymn singing. And so far Herman Wagler hadn’t let her down. Not like someone else had…Susanna also pushed that thought away.

She had forgotten about him—shut his memory from her mind. But even now she shouldn’t think badly of Matthew Yoder, though he had broken her heart. The truth had come out, and it was better this way. How awful would it have been if the truth had waited to appear after they were married? That was what her sister Mary told her, and she was right. Mary was wise about Matthew, having married his brother Ernest. Even before Matthew had left, Mary had seemed unsure of his intent. Older sisters were good for something after all, it seemed.

Still, Susanna tried to give Matthew the benefit of the doubt. He must have had his reasons for leaving the community. Even though she couldn’t understand them…or follow him into the
Englisha
world. And his reasons were obviously greater than his love for her. That was what hurt the most when he’d informed her he didn’t plan to stay in the Amish community. He hadn’t been able to tell her before, he’d said, though he’d assured her he hadn’t been playing her along all those years.

But a man didn’t suddenly make up his mind to leave, she figured. Such a desire had to have been there for a long time. Matthew had known something, regardless of how much he insisted he hadn’t. If she had loved him enough, she would have gone with him, she supposed. But how could a woman love a man who loved the
Englisha
world more than he loved her? Still, she had wavered for weeks over the matter. Struggled with the agony of it. Was she at fault? Did love require the sacrifice of everything…of all she held dear? Things like this land of her people? These open fields she’d grown up in? This place where she’d been born?

Matthew seemed to have no problem leaving all of it, and he’d soon put his words into action, getting himself placed in the
bann
in the process. As if she could face something like that. The cutting off of all contact with her past. This couldn’t be love, she’d finally told herself. She could not choose this.

So Matthew was gone.

And slowly she had put the fragments of her heart back together. Finding a piece here and a piece there that fit. Herman, with his tenderness, had helped. And her heart had healed somewhat, hadn’t it? She wouldn’t have married Herman if it hadn’t, would she?

She loved Herman. She did. Herman was the kindest man around. She should be thankful he had even considered her. Especially after Matthew left and caused such a stir in the community. No Amish young man would have been blamed for avoiding her completely, like she was a second-rate, cast-off shirt. And yet Herman hadn’t thrown her away. He had asked her home from the hymn singing and eventually asked if she would be his
frau
. Someone to love and cherish forever while they lived on this earth. Herman had done that, and was that not love?

Susanna’s eyes lingered on Herman’s face as he turned the team of horses around. The prancing hooves left tracks in the light dusting of the overnight snow. For a moment Herman glanced toward the house, and she ducked behind the drapes. It wouldn’t be decent for him to see her staring at him from the window. Not yet. Even if he was her husband. They should learn to know each other better first.

When Susanna stole another look, Herman was headed out over the open fields, hanging on to the lines. He is a handsome man, she told herself. And one she was thankful to have as her husband.

There was at least one brokenhearted girl in the community that she knew of. Herman had left behind Ruth Byler. She sure hadn’t kept her desires to have Herman take her home from the hymn singing a secret. And if there was one who did so openly, there had to be others who had hid their feelings. Yet Herman had chosen her.

Susanna turned back to the kitchen with a sigh. This had to stop. This wondering and puzzling over things. She had expected it would be over after the wedding. In fact, there had been plenty of signs during the weeks before the wedding that her doubts had flown away. Now they apparently were back in force.

But they would live through this, Susanna told herself. Herman loved her and she loved him. He had made that plain enough in the days since the wedding. And she had no reason to complain. She was sure Herman was aware that her heart hadn’t totally healed from Matthew, but he was being kind and understanding. What woman wouldn’t love such a man?

Susanna ran hot water into the kitchen sink while she brought the last of the breakfast dishes to the counter. Herman’s plate was sopped clean—it looked almost washed, like it always did. Even though it had been a large breakfast of eggs, bacon, and home fries she’d fixed him. Herman would have made a
gut
bachelor, that was for sure. The way he kept everything tidy around himself. And yet he felt the need of her, felt it necessary to bring her into his life.

Because he loved her, of course, Susanna told herself. There didn’t need to be a reason beyond that. Perhaps it was the conversation at the breakfast table this morning that was bringing this indecision up again. Well, it was more of an argument, really. Their first timid disagreement. And she had been shocked at the feelings that rose up inside of her. The insistence that Herman see things her way. And she had even grown angry, though Herman hadn’t, even as he remained firm. There would be no celebration of Christmas in their new home. And they wouldn’t be going to her parents’ place to celebrate either. It was not the way of his family, and it would not be their way.