Read The Gospel of the Flying Spaghetti Monster Online

The Gospel of the Flying Spaghetti Monster 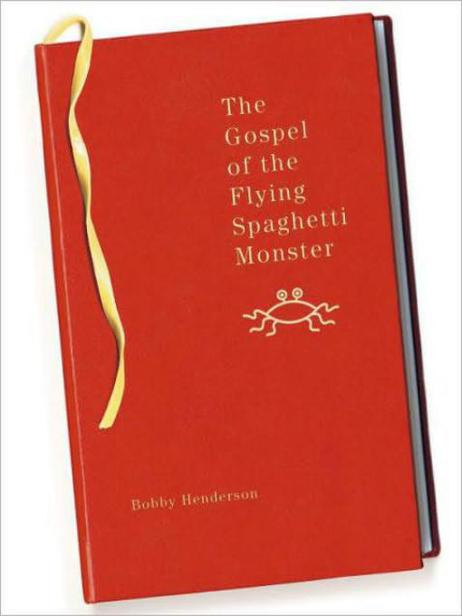 In the beginning was the Word,
and the Word was “Arrrgh!”

D
ELIVERING A DIVINE MESSAGE
requires a great deal of coordination and effort on the part of many people. I would like to acknowledge the hard work of all those who have devoted long hours and considerable mind power to keeping up the website and thereby assuring that His Word is spread across the globe. To you all, I say, thank you from the bottom of my heart—you have done benevolent and thoughtful work, and together we have accomplished much, though I can’t help feeling that our greatest moments are still ahead of us.

To my agent, Paula Balzer, I offer my sincerest gratitude. You have been brave and steadfast, guiding me through occasionally stormy seas like the great Pirate that you are.

This book could never have happened without the unwavering dedication of the publishing crew at Villard. Thank you to Daniel Menaker, editor in chief of Random House, for his wisdom, vision, and encouragement. Thank you to Sanyu Dillon and Avideh Bashirrad for their kindness and support, and especially for the marketing genius that helped get this book off to a great start. Thank you to Erich Schoene-weiss for producing a great book and contributing his own Piratical ideas on many an occasion. Thank you to Simon Sullivan and Gabe Levine for their incredible design. Thank you to Nancy Delia for her patience and unwavering commitment to this project. Thank you to Tim Mak, who is an artist, gentleman, and Pirate all in one. And, above all, my greatest thanks goes to my editor, Chris Schluep, without whom the Flying Spaghetti Monster wouldn’t even have gotten off the ground. I nominate you official Pastriarch of FSMism.

A Letter from Bobby Henderson

T
HE
B
LUNDERS OF
S
CIENCE

The Need for Alternative Theories

Toward a New SuperScience

What’s the Matter with Evolution?

FSM vs. ID, an Unlikely Alliance

A Condensed History of the World

A History of Heretics

The Pastafarian Guide to Propaganda

A Guide to the Holidays

A Final Note from Bobby Henderson and His Staff

W
HILE
P
ASTAFARIANISM
is the only religion based on empirical evidence, it should also be noted that this is a faith-based book. Attentive readers will note numerous holes and contradictions throughout the text; they will even find blatant lies and exaggerations. These have been placed there to test the reader’s faith.

O
UR RELIGION DOES NOT WISH
to discriminate or cause hurt feelings among any group—and this is especially true of the very short, who, if provoked, could easily appear out of nowhere and attack. As a solution, we offer the following:

To prevent angering the little people community, we suggest that this book be placed on the very highest shelf possible.

1
. Sometimes referred to as “midgits” or “little people.”

Welcome to the wonderful world of religion!

These are exciting times in holiness—politicians are crusading, nations are invading, and science
1
is fading. With these changes come religious opportunities the likes of which haven’t been seen since the Reformation … or at least since the persecuted masses first huddled together and shipped off to that great democratic revival meeting we call the United States of America.

With this in mind, the Church of the Flying Spaghetti Monster (FSM) invites you to learn a little more about us. We’d like to tell you all about our Heaven, which features a Stripper Factory and a giant Beer Volcano. We’d love to see you dressed in His chosen garb: full Pirate regalia. We want you to enjoy Fridays as His chosen holiday. But first you need to know a little more about us.

What do we stand for?

What are we against?

Sounds sweet, right? Of course it’s not that simple, and that’s why we need a book. (Doesn’t every religion have a book?) The Jews have the Bible (The Old Testicle), the Christians have ditto (The New Testicle), the Muslims have the Q-tip or whatever, the Jains have Fun with Dick and Jain, the Sufis have Sufis Up!, the Buddhists have the Bananapada, the Hindus have Ten Little Indians, the Wiccans have The Witches of Eastwick, and so on. If this was a manifesto, a pamphlet, a flyer, an article, or some nut preaching from a street corner, you, fair reader, might perceive FSMism
2
to be just another two-bit cult. But we’re not a cult (we’re more like a boutique religion at this point), and this is a book that will stand up to any of the others—at least in terms of strict plausibility if not literary finesse and retributive beheadings and disembowelments. The more you read about us the more you’re going to be persuaded that the Flying Spaghetti Monster is the
true
Creator and that FSMism just might be the Best. Religion. Ever.

Go ahead. Try us for thirty days. If you don’t like us, your old religion will most likely take you back. Unless it’s the Jains, whose feelings are easily hurt.

1
. Also known as the language of the forked tongue.

THE BLUNDERS OF SCIENCE

Part of education is to expose people to different schools of thought
.

The Need for Alternative Theories

S
CIENCE IS A SUBJECT IN CRISIS
. There’s a dirty little secret that the scientific establishment has been trying to keep under wraps for years: There are many unproven theories that are being taught to people as if they were established fact. But thanks to the heroic efforts of a handful of deep thinkers, the winds of truth are sweeping across the nation.

Consider the theory of Evolution. To their credit, Intelligent Design advocates have successfully argued that their alternative theory deserves as much attention as Evolution, since neither can be considered fact. This is a valid point, but Evolution is hardly the only theory in trouble.

It seems strange that Evolution is singled out as “just a theory” when there are so many basic ideas in science that remain unproven, yet are still taught as fact. The objections to teaching Evolution have only illustrated this point further:
Alternative theories must be taught in order to give our young students’ minds a broad foundation
. The Intelligent Design proponents make a compelling, and totally legitimate, argument that if a theory has not been proven, then one suggested theory is just as good as another.

Take gravity, for example: the force of attraction between massive particles. We know a great deal about the properties of gravity, yet we know nothing about the cause of the force itself. Why are particles attracted to one other? If we review the literature, we find a lot of material dealing with the properties of gravity, but very little dealing with the underlying cause of this attraction. Until we have a proven answer to this question, it seems irresponsible to instruct students in what is, ultimately, just a theory. However, if we must discuss the theory of gravity at all, then it’s reasonable that all suggested theories should be given equal time, since none have been proven or disproven. Therefore, I formally submit that the Flying Spaghetti Monster is behind this strange and often misunderstood force.

What if it is He, pushing us down with His Noodly Appendages, that causes this force? He is invisible, remember, and is undetectable by current instruments, so in theory it is possible. And the fact that the gravitational powers of the Spaghetti Monster haven’t been disproven makes it all the more likely to be true. We can only guess as to His motives, but it’s logical to assume that if He is going to such trouble, there is a good reason. It could be that He doesn’t want us floating off earth into space, or maybe just that He enjoys touching us—we may never know.
1

And while it’s true that we don’t have any empirical evidence to back up this theory, keep in mind the precedent set by Intelligent Design proponents. Not only is observable, repeatable evidence not required to get an alternative theory included in the curriculum, but simply poking holes in established theory may be enough. In this case, the established theory of gravity makes no mention as to the
cause
of the force; it merely presents the properties of it. I fully expect, then, that this FSM theory of gravity will be admitted into accepted science with a minimum of apparently unnecessary bureaucratic nonsense, including the peer-review process.

For further evidence of the true cause of gravity—that we are being pushed down by His Noodly Appendages—we need only look at our historical records. The average height of humans two thousand years ago was about five feet three inches for males, compared with an average height of around five feet ten inches for males today. Useless by itself, this information becomes quite important when viewed in terms of worldwide population. Humans, apparently obsessed with fucking, have increased their numbers exponentially over the years. We find, counter-intuitively, that a small population correlates with shorter humans, and a larger population correlates with taller humans.
2
This only makes sense in light of the FSM theory of gravity. With more people on earth today, there are fewer Noodly Appendages to go around, so we each receive less touching—pushing down toward the earth—and thus, with less force downward, we’re taller.

The Other Side of Bad (The Tucker Novels) by Barton, R.O.
Trying to Survive (Part 1) by Crowley, C.J.
Blood of the Rainbow by Shelia Chapman
Twisted: A Tracy Turner Murder Mystery Novel (The Tracy Turner Mystery Series Book 1) by Keyla Hunter
Holy Cow by David Duchovny
Into the Firestorm by Deborah Hopkinson
Peekskill USA: Inside the Infamous 1949 Riots by Howard Fast
Even Now by Karen Kingsbury
Rose In Scotland by Joan Overfield
Miles in Love by Lois McMaster Bujold
Our partner