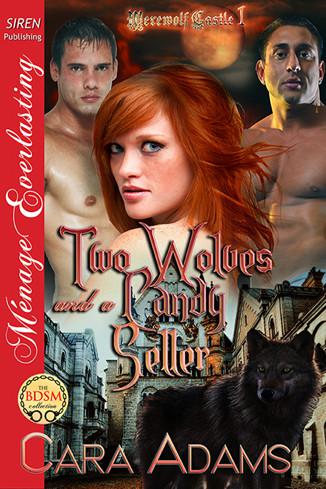 Two Wolves and a Candy Seller

When human Damask Lambert starts work in the candy store at Werewolf Castle, wolves Grigori Tasev and Jairus Petrov decide she’s the woman for them. But she’s only there for the summer, and Jairus is constantly away from the castle on business for his Alpha. Finding time to get to know each other isn’t easy.

Damask’s parents have kept her very sheltered and protected. How will she deal with the concept of a ménage, and what will happen at the end of the summer? Can they find a way to have her stay with them, and keep Jairus at home long enough for them to build a life together?

All art and logo copyright © 2013 by Siren Publishing, Inc.

If you have purchased this copy of
Two Wolves and a Candy Seller
by Cara Adams from BookStrand.com or its official distributors, thank you. Also, thank you for not sharing your copy of this book.

This is Cara Adams’s livelihood. It’s fair and simple. Please respect Ms. Adams’s right to earn a living from her work.

Jairus Petrov drove his filthy dirty car into the outer court of Werewolf Castle, parking in a “Staff Only” space against the castle wall. Tiredly he climbed out from behind the steering wheel and stretched, lifting his arms high above his head and stretching to his full height of a fraction under six feet, then arching his back and putting his arms behind him. It was a damn long drive from Vienna to here, but having the car was essential when he was out and about on pack business.

At least he had some good news to tell his Alpha from this trip. He hauled his luggage out of the trunk of the car and beeped it locked, shaking his light brown hair in dismay at the dirt and mud coating his car halfway up the doors. Washing his car would be just one more job to do, along with laundering almost every item of clothing in his suitcase. Those back roads he’d traveled on had really done a number on the car.

He crossed the outer court, noticing that the visitor’s parking lot seemed to be well filled. Jairus walked through the barbican, waving at the young man who was sitting at the customer service window, then scanned his staff ID card so the automatic gates would let him pass through the gatehouse and into the inner courtyard.

Even though the pack had lived here for hundreds of years, the need to enter the economy had caused them a lot of angst. Life had changed enormously in the last hundred years. His grandfather had told stories of when most things the pack wanted or needed were provided by themselves. They grew their own food, raised chickens and cattle for meat, fished in the lake that fed the castle moat, and made their own clothing and furniture. Electricity coming to the mountains had changed that lifestyle forever.

At first the oldest pack members had resisted the change, then they’d bought a generator for the kitchens and dining hall, and finally they’d had to accept the need to electrify the entire castle. The gold, jewels, and paintings the wolves had accumulated over the years could have been sold, but it was much better for the people to start earning proper incomes. Which meant becoming much more visible in the community and active across the wider state, country, and eventually, the entire continent.

Jairus avoided entering the great hall, the chambers which the tourists saw, turning down a hallway and swiping his ID card over a heavy wooden door marked “Staff Only.” That was another change some of the older people hadn’t enjoyed, allowing some parts of the castle to become public access and keeping themselves to the east wing when the castle was open. Although guests were told the east wing was waiting for the funds to be refurbished and enquirers were even shown a locked box on the chapel wall where they could donate to castle renovations, the east wing was, in fact, very comfortable and where the pack had their own apartments and shared living rooms.

Any money donated was, however, used strictly for renovations. At the moment it was repairing the chapel’s wooden roof.

Jairus picked his suitcase up and climbed the old stone stairs to the third floor where his apartment was. Even here, behind the security of two locked doors, he had to swipe his card again to enter his own private apartment. No one could enter anyone else’s personal space uninvited.

He dumped his suitcase on the end of his bed and undressed, leaving all his clothing there too, then headed into his bathroom for a long, hot shower. He was toweling his hair dry when his cell phone beeped. Jairus expected it to be the Alpha, summoning him to report about his trip, but it was his good friend Grigori Tasev.

Another change over the past hundred or so years had been the gradual decline in the number of female werewolves born. For almost three generations now, far more males than females had been born, leaving the pack in danger of disappearing. Twenty years ago the previous Alpha had made cautious enquiries and discovered many other packs were in the same situation. The problem wasn’t unique to them.

One of the first changes their current Alpha had made was to decree that all male werewolves were to mate with a human woman. Once the young men began traveling Europe on pack business, and studying in universities all around Europe, it became much easier for them to fall in love with human women. But Jairus’s job took him away for long periods where he couldn’t mix freely with people. His job was to be invisible, to listen and learn what the pack wanted to know. So he not only failed to form a relationship with a woman, he was unlikely to even meet a human woman who was interested in a werewolf shape-shifter.