Management science, however, steers clear of belief. A child of the scientific revolution and the industrial era, it shuns the intangible, subjective and non-measurable. It pays greater value to objectivity. Hence, greater attention is paid to institutional values, arrived at by a team through consensus following a logical process. These belong to no one but every constituent member of the institution is contractually obliged to adhere to them, even at the cost of personal beliefs, at least during office hours. Organizational values are mapped to particular behaviours: the assumption is that certain behaviours reflect certain beliefs. This assumption allows the pretender to thrive in corporations, for as long as you are polite or mindful of protocol and respectful of rules, no one really cares what you feel or think. Belief may express itself in behaviour, but the reverse may not be true. Respect (intangible belief ) may manifest in politeness (tangible behaviour), but politeness may not always reflect respect.

When corporations speak of growth, they speak of institutional growth not individual growth. And growth is always seen in terms of accumulation of wealth or equity or skills, never in terms of emotion or intellect. By doing so the corporation invalidates the personal, celebrates the professional, and creates the divide between work and life. This is what dehumanizes corporations, and is the root cause of many of the problems facing organizations today: from lack of initiative and lack of ownership to the lack of ethics. Failure to recognize this is the greatest shortcoming of modern management studies.

Despite the veneer of objectivity and logic, management science is itself firmly rooted in a cultural truth, the subjective truth of the West, indicated by its obsession with goals. Targets come first, then tasks, then people. The value placed on vision, mission, objectives, milestones, targets and tasks in modern business practice resonates with the Greek quest for Elysium, the heaven of heroes, and the biblical quest for the Promised Land, paradise of the faithful.

This is not surprising as the purveyors of management science are mostly engineers, bankers and soldiers from twentieth century North America, which is deeply entrenched in the Protestant work ethic, a unique blend of Greek and biblical beliefs. And like all believers, they are convinced that goal-orientation is logical, hence the universal solution to all business problems. But it is not so. In fact, there are cultures, like India, where this goal-orientation is seen as a problem, not a solution.

This is obvious to any student of mythology. But who studies mythology in a world where most managers are engineers?

Belief is the seed from which sprouts every human enterprise, every culture, every act of human kindness and cruelty. Every belief is irrational and hence a myth. Therefore, the study of stories, symbols and rituals to decode the beliefs they communicate is called mythology. There are secular mythologies in the world, such as the stories, symbols and rituals of a nation state, or a corporation, as well as religious mythologies.

For the believer, his belief is objective truth; he therefore rejects the notion of myth, and shuns the subject of mythology, a key reason why belief remains an invisible unacknowledged lever in modern business practices. We convince ourselves that our beliefs are rational hence right, while those of others are irrational, hence wrong.

To have beliefs, we need imagination. Imagination springs from the neo-frontal cortex, or the enlarged part of the brain that is located behind the forehead. This exists only in human beings. Some animals, like the dolphin and the chimpanzee, may imagine, but nothing on the scale that humans can.

It comes as a surprise to most people that the imagination is a neurobiological function specific to the human species, not a universal phenomenon. It means accepting that every human being inhabits his own customized personalized subjective version of reality that no one else has access to.

Every animal looks at the world differently but the human gaze is especially different because the reality of nature is being constantly compared and contrasted with imaginary reality inside the head. We can control the subjective world in our head but not the objective one outside. This leads to conflict as the imagination seeks a world that is much more controllable, hence delightful.

Conflict is further amplified because every other human we encounter has their own version of imagined reality and each person is convinced that their imagined reality is the ‘correct’ version of reality. What is true then? This brings about awareness of the self (my view versus the view of others), and the need for language, creativity and reason (to communicate my view and convince others of my view).

Humans have the ability to control fire, water, plants as well as animals, something that no other living organism can do. But we struggle to control the human mind: our mind as well as the mind of those around us. Control makes us feel powerful; lack of control makes us feel powerless. And so we are left to wonder: what is the purpose of our abilities, who are we, and what happens after death? Nature offers no answers. We only have our beliefs to guide us, structure our lives, give it meaning, and direction. Most people follow beliefs prescribed by others; a few design their own. As we agree upon what life can be or should be, we are driven to work, establish businesses, create civilizations and leave behind legacies. 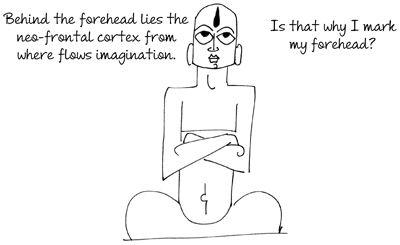 There was once a priest who was very poor, there were constant quarrels in his house between his unhappy wife, his hungry children and his helpless parents. He begged the deity of his temple to help. So the deity gave him a pot of gold. The happy priest sold the gold and used the money to repay his debts, bought all the things money could buy, and even made investments to secure his future. But soon after the quarrels started again: between his greedy wife, his ambitious children and his neglected parents. Each one wanted a greater share of the treasure. Annoyed, the priest went to the deity and demanded a solution. Once again the deity gave him a pot of gold. “No, I don’t want another pot of gold. Give me something that solves the problem truly,” cried the priest. “Pot of gold!” exclaimed the deity, “But I never gave you a pot of gold. I gave you the nectar of wisdom. Did you not drink it? Or were you too distracted by the container?”

Stories, symbols and rituals that define a culture, even business practices that shape an organization, make up the pot of gold that we all engage with; contained within it is belief in the culture that makes us see the world in a particular way. It is often overlooked.

Every belief expresses itself in the stories we tell, the symbols we create, and the rituals we follow. Stories, symbols and rituals create culture. Culture in turn shapes the beliefs of those who inhabit it. Thus, from nature comes imagination, from imagination comes subjectivity and from subjectivity comes belief, from belief comes culture and from culture springs forth humanity. 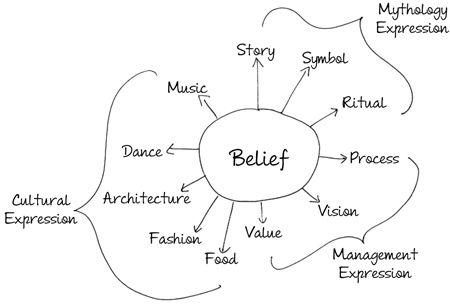 The uniqueness of a culture’s music, art, architecture, food and fashion is an expression of that culture’s unique beliefs. The diversity of cultures around the world indicates diversity of beliefs, hence plurality of human thought. Mythology involves studying these stories, symbols and rituals (the codes) and decoding the underlying patterns of thought. It reveals that different communities think differently and so approach life very differently. It reveals that management science is rooted in Western beliefs and indifferent to Indian or Chinese beliefs.

Myth got a bad name, and rationality got a good name, because of the scientific revolution of the sixteenth century, according to which only that which is rational is real and relevant. The word was used to dismiss ideas of every culture other than European. European ideas were assumed to be rational, hence not mythic. This has naturally put other cultures on the defensive. Nobody wants to be associated with myth, hence falsehood.