Encyclopedia Brown Gets His Man 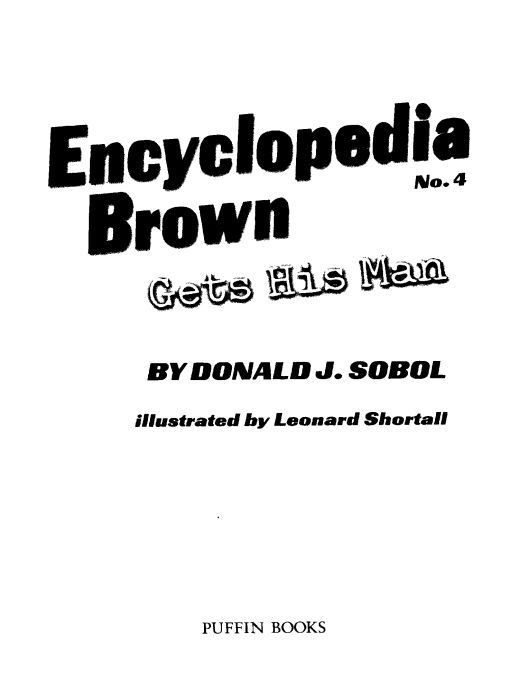 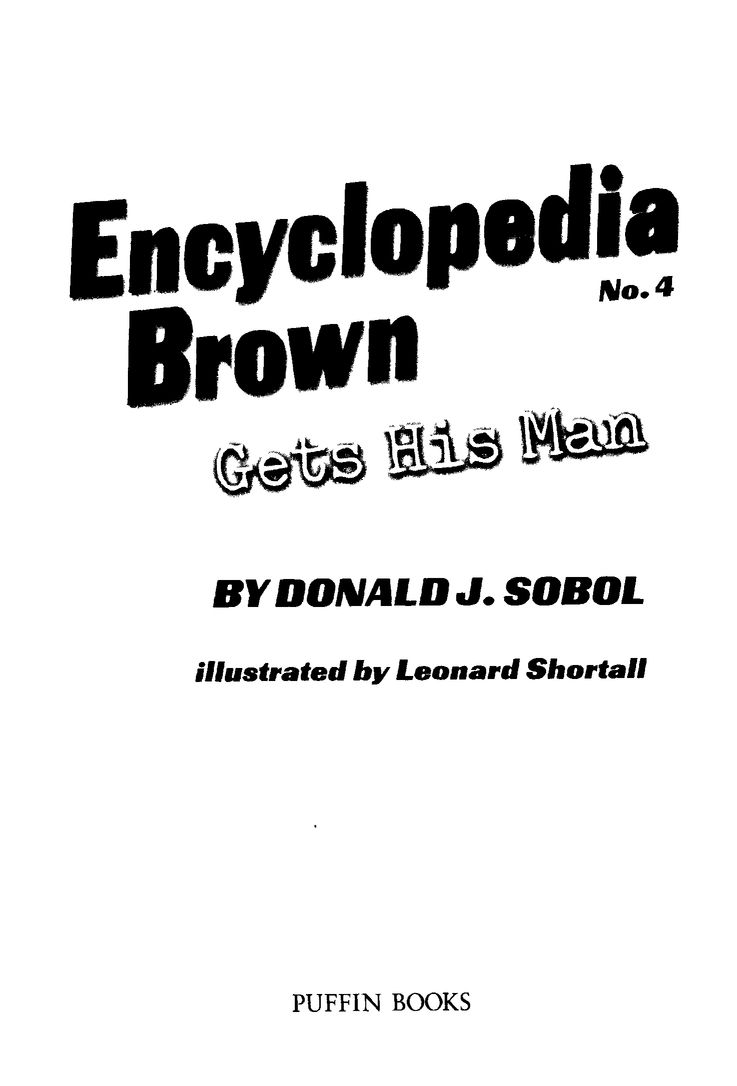 The Case of the Marble Shooter 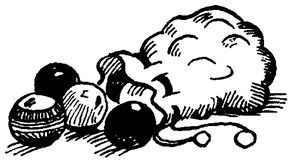 Now it happens that in America some people break the law.
Many get caught, but a few get away.
This was not true in Idaville.
In Idaville
everyone
who broke the law got caught.
Aside from catching crooks one—two—three, Idaville was like any other American town its size. It had banks, movie theaters, and delicatessens. It had rich families, poor families, and several miles of sunny beach.
And for its war on crime, Idaville had Encyclopedia Brown.
Encyclopedia’s father was Chief Brown, head of the Idaville police force. People from everywhere 4 agreed that he was the smartest police officer in the land.
Chief Brown never let out the reason for his success. If he did, who would believe him?
Who would believe that the real brains behind Idaville’s wonderful police record was his quiet, ten-year-old son?
For a year now Chief Brown had been bringing home his hardest cases. Encyclopedia solved them while eating dinner in the Brown’s red brick house on Rover Avenue.
Since Encyclopedia had taken to matching wits with criminals, the word had raced through the underworld: “
Stay clear of Idaville.
”
Idaville! Big-time gunmen trembled at the mere mention of the town!
Encyclopedia never told anyone about the help he gave his father. He didn’t want to seem different from other fifth-graders.
But he could do nothing about his nickname.
Only his parents and teachers called him by his right name, Leroy. Everyone else in Idaville called him Encyclopedia.
An encyclopedia is a book or set of books filled with facts from A to Z. Encyclopedia Brown knew about the American Automobile Association, the Zanzibar Zipper Company, and everything in between. He had read more books than Miss Babcock, the principal of the Idaville grammar school.
Encyclopedia did not solve mysteries just in the dining room. During the summer he often solved them in the garage.
He wanted to help the children of the neighborhood. So he had opened his own detective business.
Outside the garage each morning he hung a sign:

One day a boy walked into the garage. He dropped to one knee before Idaville’s only private detective.
“Goodness,” thought Encyclopedia. “I haven’t been
that
successful!”
The boy wasn’t doing homage, however. He was aiming. With a snap of his thumb he spun a quarter through the air. It landed on the gasoline can beside Encyclopedia.
“You’ve got a hot thumb,” said Encyclopedia. “You’ve got the hottest thumb I’ve ever seen.”
“I want to hire you,” said the boy. “My name is Algernon Kehoe. Some big kid just made off with Minnie and Moocher.”
“Kidnapped them?” exclaimed Encyclopedia. “Didn’t they shout for help?”
“No, but they clinked a little,” said Algernon glumly.
Encyclopedia couldn’t imagine why two girls should dress in anything that clinked, like two knights or a pair of dice.
“It’s months too early for Halloween,” he thought.
The case was a puzzler, all right.
“Describe the missing persons, please,” he said.
“Minnie has two red stripes across the middle,” began Algernon. “Moocher has—wait! They’re not missing persons. They’re missing marbles.”
Algernon explained. Minnie and Moocher were his best shooters. He had been practicing marbles by himself when a big kid had come along and challenged him to a match.
“For fair or for keeps?” asked Encyclopedia.
“For keeps,” answered Algernon.
“He beat you?”
“I beat him,” said Algernon. “I won all his marbles. He got sore and took Minnie and Moocher, and all my other marbles.”
“You didn’t try to stop him?”
“Of course I tried,” said Algernon. “I said I’d tweek him, but a bunch of his friends appeared. They asked who I was, and the big kid said, ‘Who? I don’t see anyone.’ But I noticed he closed his eyes just before he spoke.”
“Hmmm,” said Encyclopedia. “How was he dressed?”
“He wore a sweatshirt with ‘Tigers’ written on it, like his friends.”
“I knew it!” exclaimed Encyclopedia. “Bugs Meany!”
Bugs Meany was the leader of the Tigers, a gang of tough older boys. When it came to upsetting the peace of the neighborhood, they were worse than noisy plumbing. Since opening his detective agency, Encyclopedia had often been hired to stop Bugs’s dishonest doings.
For several minutes Encyclopedia was silent, thinking.
Algernon stood by, working his thumb to develop muscle.
Finally Encyclopedia said, “Bugs will say he never saw you before. We must make him admit he knows you.”
“He knows me,” said Algernon. “He called me ‘Algernon’ and ‘old pal’ when we started to shoot marbles. After I licked him, he called me a ‘dirty thief’ and lots of other names.”
“We had better talk with Bugs,” said Encyclopedia. “Let’s go, Algernon.”
“Just call me Al, if you don’t mind. Algernon means ‘with the mustache.’ ”
The Tiger’s clubhouse was an unused tool shed behind Mr. Sweeny’s Auto Body Shop. When Encyclopedia and Algernon arrived, Bugs was alone. He was playing checkers with himself, and cheating.
“Scram,” he snarled when he saw Encyclopedia. “Or I’ll knock you so hard on the head you’ll have to take off your shoes to watch television.”
“I ought to tweek him now while he’s alone,” whispered Al.
“Take it easy,” Encyclopedia whispered back.
But Algernon began working his thumb excitedly.
Bugs Meany stared. “What’s with this kid?” he asked. “Is he practicing to be a hitch-hiker?”
“His name is Al Kehoe, and you stole Minnie and Moocher and his other marbles,” said Encyclopedia. “Kindly return them.”
“I stole his marbles?” cried Bugs. He clapped himself smartly on the forehead. “Why, I never saw Jumpy Thumb here before in my life.”
Algernon’s marble-shooting thumb was wiggling faster than ever. “I was a coward to let him rob me,” he muttered. He started for Bugs.
ADS
15.4Mb size Format: txt, pdf, ePub

Seaglass by Bridges, Chris
Dragonvein Book Four by Brian D. Anderson
Key Witness by J. F. Freedman
Snow Ride by Bonnie Bryant
Jimmy Coates by Joe Craig
Acts of Mercy by Mariah Stewart
Heart of a Cowboy by Missy Lyons
After the Flag Has Been Folded by Karen Spears Zacharias
Regency Sting by Elizabeth Mansfield
You Could Look It Up by Jack Lynch
Our partner