Encyclopedia Brown Gets His Man (4 page)

BOOK: Encyclopedia Brown Gets His Man
>>DOWNLOAD HERE >>READ ONLINE NOW
ads
Chief Brown went over the case during the half-hour drive to Glenn City.
The fifty thousand dollars had been stolen from a safe in the library of the explorer’s home. The police believed the thief had hidden the money somewhere in or around the house, expecting to come back for it later.
The reason for this belief was simple. Anyone could get into Sir Cameron’s house. But no one, including the servants, could leave the grounds without being searched by guards.
“Sir Cameron liked visitors,” said Chief Brown. “However, he was afraid that someone might steal part of his famous Arctic collection. Ah, here’s the estate just ahead.”
Encyclopedia saw a large brick house and broad lawns enclosed by a high steel fence. A stream of people was entering by the main gate.
“Sir Cameron died the day after the theft,” said Chief Brown. “All of his belongings—his house, his furniture, and his Arctic collection—are being auctioned today.”
“Does Chief Walker think the thief will try to slip the money out in the crowd?” asked Encyclopedia.
“Yes, and there aren’t enough policemen in the state to watch everyone here today.”
As his father parked the car, a big man waved.
“That’s Chief Walker. I’ll be with him till the sale starts at ten o’clock,” said Chief Brown. “Suppose we meet at the front door at ten minutes of ten.”
Encyclopedia nodded and glanced at his watch. It was nine o’clock. That gave him fifty minutes to find the fifty thousand dollars!
The boy detective considered the thief’s problem.
He could get into the house. But he could not get out of it without being searched by the guards. So after breaking open the safe, where would he hide the money?”
Burying it in the ground would take too long. And someone was sure to see him. Then there was the risk of coming back later to dig up the money.
“The money has to be hidden where no one would think of looking,” decided Encyclopedia.
He wandered from room to room. Men and women were examining every stick of furniture. Drawers were pulled out. Cabinet doors were opened. Wives argued with husbands about how much to bid for a chair or table or desk when the sale began.
Nobody screamed. Nobody fainted. Nobody opened a drawer or door and discovered fifty thousand dollars!
Encyclopedia edged up to a piano. Quickly he lifted the lid. Inside was only more piano. He searched on.
At nine-thirty he reached a long room. This was Sir Cameron’s private museum. A sign above the door read:
Objects and Animals
From Sir Cameron Whitehead’s
50 Years of Exploration
In the Lands of the Far North
In the center of the long room a life-like polar bear stood reared upon its hind legs. Eight little penguins formed a ring at the bear’s feet.
More stuffed animals lined one wall. There were a wolverine, an Arctic fox, a caribou, a walrus, and other animals from the North Pole region.
The wall opposite the stuffed animals was hung with articles of Eskimo life: clothing, tools, weapons, and a sled made of driftwood with ivory-tipped runners.
The other two walls of the museum were covered
with photographs. Most of them showed Sir Cameron bundled up against snow and ice.
It was ten minutes before ten o’clock. Encyclopedia hurried to meet his father at the front door.
When Chief Brown arrived, he was frowning.
“I’m afraid it’s hopeless,” he said. “The Glenn City police have gone over every inch of the house and grounds. Somehow, the thief must have got past Sir Cameron’s guards with the money.” 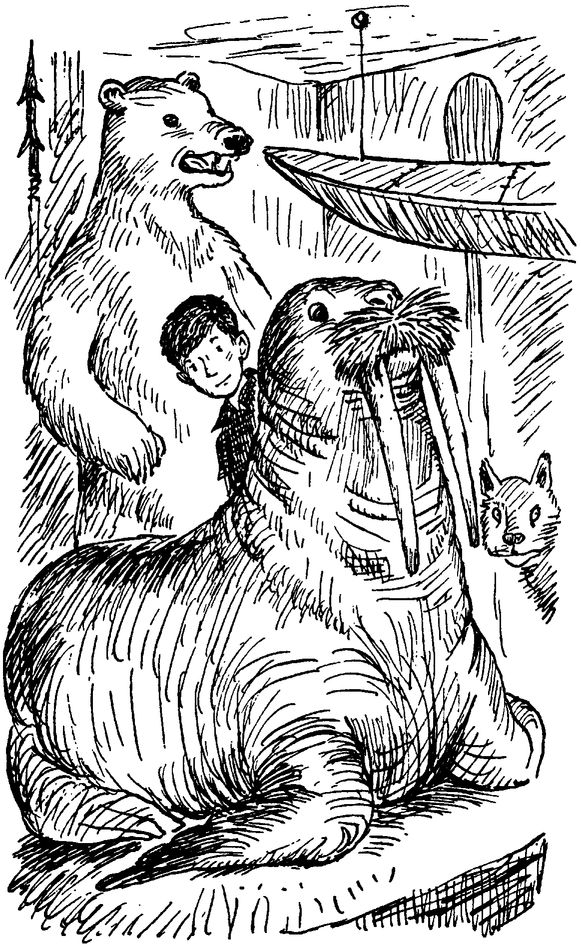 There were animals from the North Pole.
“No, the money is still here, Dad,” said Encyclopedia. “I think this is what happened. The thief waited till other visitors came to see the dying Sir Cameron. The thief went into the house with them bearing gifts.
“While the other visitors were in Sir Cameron’s bedroom, the thief waited in the living room,” went on Encyclopedia. “Once alone, he broke open the safe, stole the money, and hid it in the—”
IN THE WHAT? 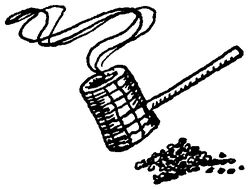 The Case of the Coffee Smoker
Roscoe Kerr laid twenty-five cents on the gasoline can. His hand was trembling.
“I’ve got big problems,” he said.
“Are you sure you want a detective, not a doctor?” said Encyclopedia. “You’re shaking like a grass curtain.”
Sally hurried over with an empty box. “Sit down before you drop,” she said.
“I’ll be all right,” said Roscoe. “I’ve been smoking too many dried coffee grounds.”
“You ought to change your brand,” said Encyclopedia.
“I’d give up smoking, but it’s too late,” said Roscoe. “An hour ago I got a telephone call. The caller threatened to tell my mother I’ve been smoking—unless I paid him a dollar a week.”
“That’s blackmail!” gasped Encyclopedia.
“Who threatened you?” asked Sally.
“It sounded like Harry Hallahan,” said Roscoe. “I wish I’d never seen him smoking behind the old library building!”
Harry Hallahan and the old library building had made news the month before. Harry had admitted to the police that he had been secretly smoking cigarettes behind the building. His carelessness had set it afire.
“He’s been after me for reporting him,” said Roscoe. “Whenever we meet, he strikes me.”
“He walks up and socks you?” said Encyclopedia.
“No, he strikes me,” said Roscoe, “on the seat with a wooden kitchen match and lights his pipe.”
“You ought to wear your corduroy pants,” said Encyclopedia.
“If I do,” said Roscoe, “Harry makes me do a headstand. Then he strikes a match off the bottom of my shoe. He’ll never forgive me for reporting him.”
“It was your duty,” said Sally.
“I know,” said Roscoe. “But I forgot Harry is older than he looks. His seventeenth birthday was last week. His mother gave him permission to smoke a pipe with real tobacco anywhere he likes. He’s been using me to light up ever since!”
“This is awful,” said Sally. “Can’t we do something, Encyclopedia?”
“Let’s deal with the blackmail first,” answered Encyclopedia. “Were you smoking today, Roscoe?”
“On and off all morning,” said Roscoe. “I kept getting dizzy. I had to stop a lot for air.”
“Puffing coffee in an old corncob pipe will do that to you,” said Encyclopedia. “Where were you burning your lungs?”
“In the trees,behind my house,” said Roscoe.
Encyclopedia decided to examine the spot. On the way, Roscoe called himself every kind of a fool.
“Smoking always turns me green, but I thought I was being smart,” he said. “If you get me out of this mess, Encyclopedia, I’ll swear off smoking for life.”
The three children went down the slope behind Roscoe’s house. Roscoe stopped in a group of trees.
“Usually I steal a smoke in my lean-to,” he said. “Nobody can see me. But this morning I smoked under that oak tree.”
Encyclopedia sat in Roscoe’s lean-to. He could see nothing but the trees growing thickly in front. He moved to the oak. Now he could see one window of a neighboring house.
“The Hallahans live there,” said Roscoe. “That window is Harry’s room. But he isn’t home.”
“How do you know?” asked Sally.
“His parents went to Stuart Beach for the day,” said Roscoe. “Mr. Hallahan is a fisherman. When he’s away, Harry has to go out early in the morning to inspect the nets. He doesn’t get back until about noon.”
Encyclopedia’s watch showed five minutes past noon. It also showed a raindrop.
The sky was clear except for a single black cloud. Suddenly the cloud seemed to open and the rain poured down.
Encyclopedia, Sally, and Roscoe darted into the lean-to. While they waited for the cloud-burst to pass, Roscoe told about the telephone call.
“The blackmailer said to leave a dollar under the brown rock behind the statue of Thomas Edison tomorrow,” he said.
“We can watch from hiding and catch him as he picks up the money!” said Sally.
“Harry will say he happened to kick aside the rock and saw the money by chance,” said Encyclopedia. “No, we’ve got to talk with him before Roscoe pays a penny.”
When the rain stopped, they climbed the hill to Harry’s house. His father’s truck was parked in front. The stone walk to the front door was under two inches of rainwater. 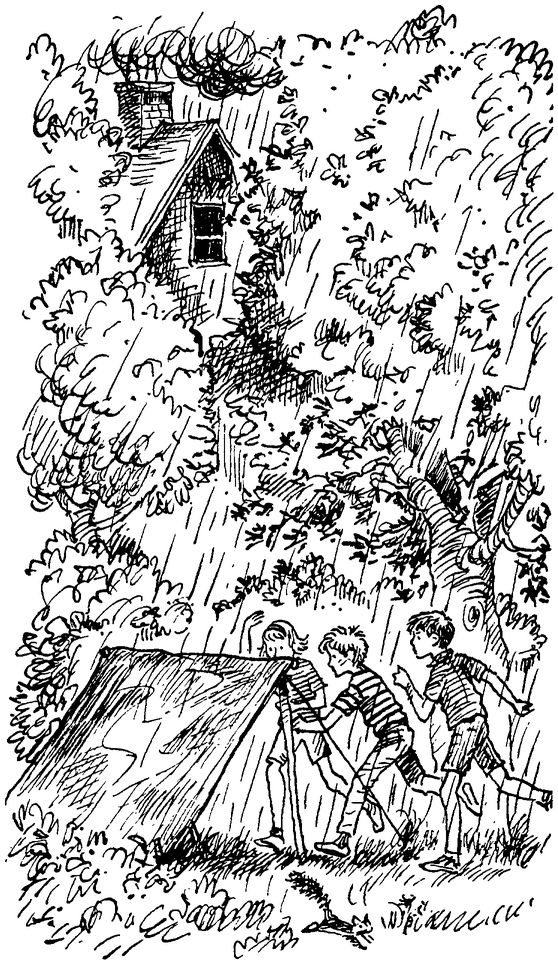 They darted into the lean-to.
Roscoe scouted the rear. “The back walk is even wetter. There’s no other way into the house,” he said.
So the three children sloshed through the water to the front door. Sally rang the bell.
Harry shouted from the kitchen to come in. He was fixing himself lunch.
“You saw Roscoe smoking this morning from your bedroom window,” said Encyclopedia. “Over the telephone you threatened to tell his mother unless he paid you a dollar a week.”
“You’re crazy as a jaybird!” said Harry. “I haven’t been in my room since dawn. I’ve been on the water all morning.”
“Don’t tell us you just got home!” said Sally.
“I drove the truck back during the cloud-burst,” said Harry. “I waited in the truck till the rain stopped. Then I came straight into the kitchen.”
Harry took his pipe from his pocket and filled it with tobacco. He reached into a box of kitchen matches on the stove.
“We know how you’ve been lighting your pipe!” said Sally.
Harry lifted a foot and struck a match on the bottom of his shoe. He was acting very superior.
“Stop blackmailing Roscoe,” said Encyclopedia. “If you don’t, he’ll have to tell your father.”
“Tell my father what?” sneered Harry.
“Tell him you stayed home all morning instead of inspecting the fishing nets,” said Encyclopedia.
HOW DID ENCYCLOPEDIA
KNOW? 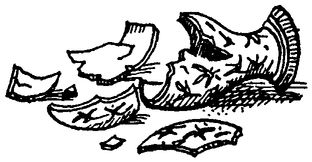 How Sweet It Is by Alice Wisler
Homeland: Carrie's Run: A Homeland Novel by Kaplan, Andrew
Deception by Stacy Claflin
Moscardino by Enrico Pea
Uprooted by Naomi Novik
Emily Goldberg Learns to Salsa by OSTOW, MICOL
Steel Wolves of Craedia (Realm of Arkon, Book 3) by Akella,G.
Dark Lycan by Christine Feehan
Megan Frampton by Baring It All
Summer of the Redeemers by Carolyn Haines
Our partner