Encyclopedia Brown Gets His Man (2 page)

BOOK: Encyclopedia Brown Gets His Man
>>DOWNLOAD HERE >>READ ONLINE NOW
ads
Encyclopedia pushed him back.
“I’m going to tweek him, so help me,” said Algernon.
Just then Duke Kelly and Spike Larsen, two Tigers, entered the clubhouse. They glared at Encyclopedia. Then they saw Algernon’s thumb wiggling.
“Who is
he?”
they asked.
“Algernon Kehoe,” answered Bugs. “He says I stole his marbles.”
“I ought to tweek them all,” Algernon growled under his breath. “Tweek, tweek, tweek.”
“What’s he mumbling about?” demanded Bugs.
“I beat you at marbles, and I can beat you at tweek,” said Algernon. 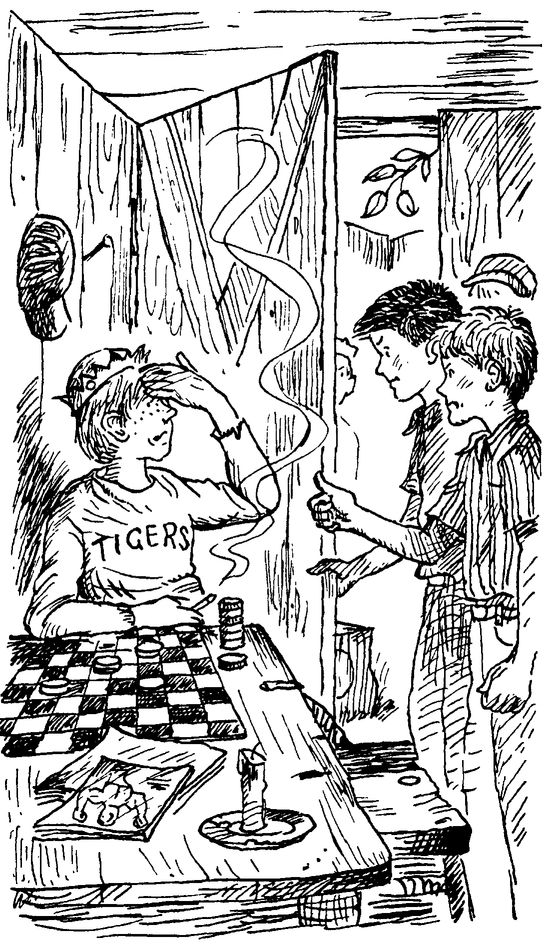 “I stole his marbles?” cried Bugs.
“Tweek?” said Bugs.
“Tweek,” repeated Algernon. “It’s played like this.”
His right hand, with his powerful thumb tucked under his forefinger, shot out. When his hand got under Bugs’s lower lip, his thumb snapped free like a broken spring.
“Tweek!” said Algernon.
Boing! Boing!
went Bugs’s lips. They bounced up and down like the tip of a diving board.
While Bugs danced around, flapping his arms in pain, Spike and Duke cocked their fists.
Encyclopedia held up his hands.
“Don’t make more trouble for yourselves,” he warned. “Bugs stole Algernon’s marbles all right.”
WHAT MADE ENCYCLOPEDIA SO SURE?
The Case of Bugs Meany, Detective 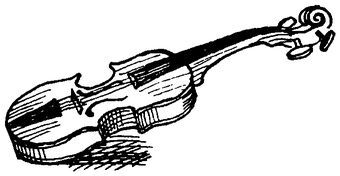 Whenever Encyclopedia crossed his path, Bugs Meany burned with a single desire.
It was to fill Encyclopedia’s mouth with a fist.
But Bugs never swung a blow. Every time he felt like it, his jaw ached. For he remembered the detective’s junior partner, Sally Kimball.
Sally was the prettiest girl in the fifth grade. She was also the best athlete.
The first time she had seen Bugs, he was bullying a Cub Scout.
Sally had jumped off her bike. She had put her left into Bugs’s face
rap-tap-tap.
Then her right had gone
whammo!
After the first punch, Bugs had seen red. After ten punches, he had seen stars.
“Bugs is like a lumpy mattress,” warned Encyclopedia. “He won’t rest till he gets even.”
“He’s just a big bully,” said Sally. “He can’t match your fast brainwork.”
But the next morning Sally was worried.
“Look what was under my front door!” She handed Encyclopedia a business card. It read:
Tigers, Inc.
Private Detectives
Staff of Experts
20¢ A Day Plus Expenses
Office Behind Sweeny’s Body Shop
“Bugs is out to steal your customers,” said Sally angrily. “He’s charging a nickel less.”
“Bugs can’t charge anything till he gets a case,” replied Encyclopedia.
“He has a case,” said Sally. “Mario Martinelli hired him to find his violin.”
Encyclopedia gasped. “Golly, Mario has been practicing hard for the summer symphony orchestra. Tryouts are tomorrow!”
“Bugs will never find the violin in time. His experts couldn’t find a clam in a sand pail,” said Sally. “If we don’t help Mario, he won’t make the orchestra. Come on!”
Encyclopedia agreed reluctantly. He reached for his bike. “Bugs has every right to complain if we butt in,” he said.
As the partners neared Mario’s house, they could not believe their eyes.
Tigers were crawling over the lawn, peering through magnifying glasses for clues. Bugs was dusting fingerprint powder on a windowsill.
Mario, a slender boy of eleven, watched uneasily.
“No fingerprints here,” called Bugs. “The thief wiped the windowsill clean. We’re up against a master criminal!”
“Won’t you be able to find my violin?” asked Mario.
“Don’t worry, maestro. I’m a regular blood-hound,” said Bugs. “I’m onto something right now.” He grinned mysteriously.
The grin vanished as he spied Encyclopedia and Sally. “Hey, you Tigers,” he shouted. “Let’s go. This place is getting crowded with amateurs.”
After the Tigers had trooped off,. Encyclopedia asked Mario about the theft.
“Someone climbed through my open bedroom window last night and stole the violin,” answered Mario.
“Why did you hire Bugs Meany?” asked Sally.
“He came by early this morning. He was passing out his business cards,” said Mario. “I told him about the violin. I said my mother had already telephoned the police. Bugs insisted he was smarter than any policeman.”
“All those Tigers working for twenty cents,” mused Sally. “Something is fishy!”
“Oh, there is a ten-dollar reward,” said Mario. “Bugs told my mother we would have a better chance of getting the violin back if she offered a reward.”
“That no-good Bugs!” cried Sally. “I’ll bet anything he stole the violin himself!”
“If he did, I’ll surely get it back,” said Mario hopefully.
The three children sat down on the porch. There was nothing to do but wait for Bugs to return with the “stolen” violin and claim the reward.
An hour later the Tigers paraded back. Sure enough, Bugs was carrying the violin.
“Man, oh, man!” he sang. “I guess you know now who is the greatest detective in Idaville!”
The rest of the Tigers threw up their arms and cheered like mad. “Bugs! Bugs! Bugs!”
“While certain private detectives were sitting around helpless, I was using my head,” said Bugs. “To find stolen goods, you have to think like a thief.”
“You’ve had enough practice,” snapped Sally. 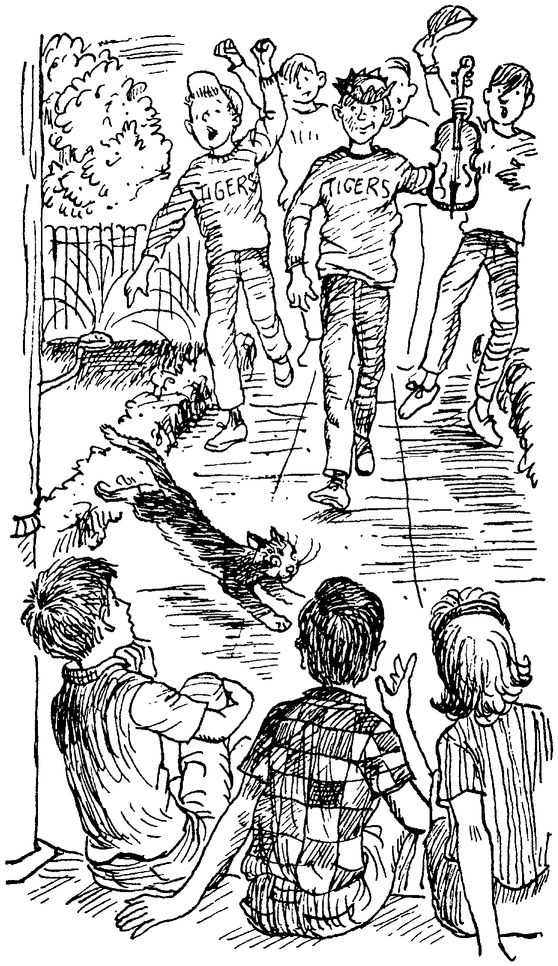 The Tigers cheered like mad.
Before Bugs could take a fighting stance, Encyclopedia spoke up. “How did you find the violin, Bugs?”
“I’ll show you,” said Bugs, relieved at not having to defend himself against Sally.
They all walked to the woods past Rolling Road.
“I figured some kid had swiped the violin, hoping to collect a reward for its safe return,” said Bugs. “A grownup thief would have stolen the silverware instead.”
“That makes sense,” said Mario.
“The thief couldn’t take the stolen violin home,” went on Bugs. “And if he wanted a reward, he had to hide it where it wouldn’t get damaged. A tree seemed a good place—that’s exactly where I saw it. Up in the top of that one.”
Encyclopedia looked at the tree to which Bugs had pointed. “But you can’t see to the top,” he said. “The leaves are too thick.”
“Y-you can’t? W-well-why-a squirrel helped me,” stammered Bugs. “Yeah, this squirrel was on the trunk, halfway between the ground and the lowest branch. Something made it nervous. It backed down slowly, reached the ground, and raced away.”
“Then you climbed the tree to see why the squirrel acted so strangely,” said Encyclopedia. “And lo! There was the violin!”
“Right! You’ll be a detective yet,” said Bugs. “Now pardon me while I go and collect the reward.”
“There is no reward for liars,” retorted Encyclopedia.
WHY DIDN’T ENCYCLOPEDIA BELIEVE BUGS?
The Case of the Underwater Car 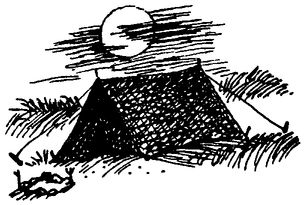 When Encyclopedia and his pals went camping overnight in the State Park, they had a rule: Never take Benny Breslin along.
Everyone liked Benny—during the day.
At night Benny became a public enemy by climbing into bed. He closed his eyes, opened his mouth, and sounded his nose. His snoring shook garage doors up and down the street.
“You should take Benny with you this trip,” said Encyclopedia’s mother.
“The last time we took Benny camping,” replied Encyclopedia, “the governor closed the State Park for two days.”
It was true. Benny’s snores had awakened other campers. Frightened, they had reported a wild animal in the area. The park had been closed for two days while state troopers hunted a bear.
“Benny’s mother bought him a strap,” said Mrs. Brown. “It fits under his nose. He sleeps very quietly now.”
“Quietly,” thought Encyclopedia, “as an elephant choking to death.”
Nevertheless, he agreed to take Benny. He could not say no after his mother gave him a box of cotton.
“You can stuff your ears,” said Mrs. Brown. “There’s enough for everyone.”
After lunch Encyclopedia biked down to Mill Creek. Benny Breslin was already there, and so were the other boys of the gang: Charlie Stewart, Fangs Liveright, Pinky Plummer, Herb Stein, and Billy and Jody Turner.
They reached the State Park two hours later. Most of the best camping sites were taken. The only good spot left was on a small hill overlooking a bend in the dirt road. Beyond the road, and about forty feet below it, was the ocean. 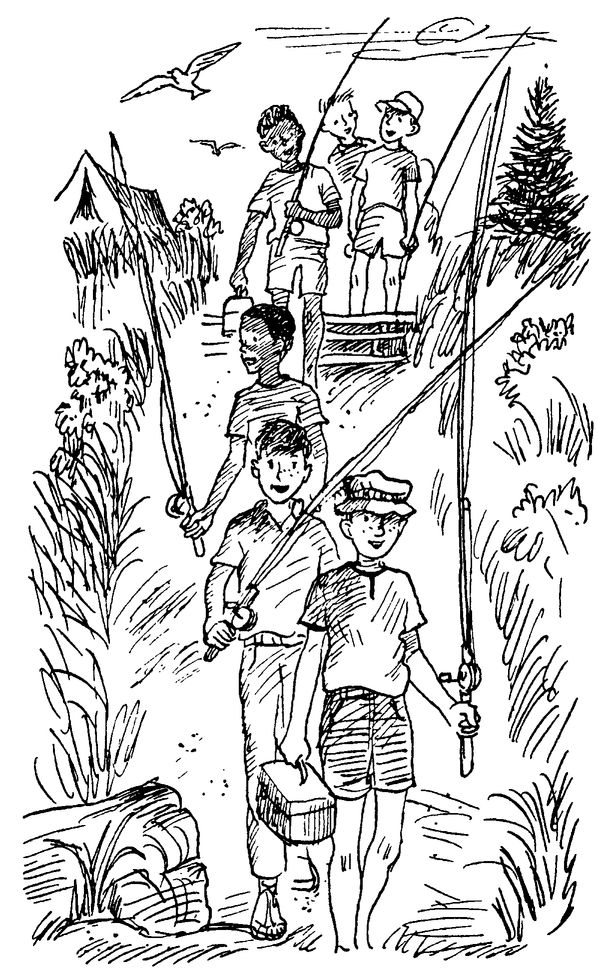 The boys went down to the ocean.
The boys unpacked their bicycles, pitched their tents, and went down to the ocean with their fishing poles.
By nightfall, no one except Benny had hooked any fish big enough to keep. Benny had caught seven beauties.
“Fish are great music lovers,” explained Benny. “Just sing them a scale. A-ha-ha-ha!”
ADS
15.4Mb size Format: txt, pdf, ePub

Fallen Angels: Beguiled\Wanton\Uncovered by Lori Foster
The Taming by Jude Deveraux
No Cure for Death by Max Allan Collins
Do Me Baby (The Beaumont Series) by Angie Daniels
After Impact: After Impact Trilogy, Book 1 by Stark, Nicole
Bound to the Bachelor by Sarah Mayberry
Killer Crab Cakes by Livia J. Washburn
Fantastic Beasts: The Crimes of Grindelwald by J. K. Rowling
Sacrifice of Love by Quinn Loftis
Figurehead by Patrick Allington
Our partner