BOOK: Excellent Emma
11.69Mb size Format: txt, pdf, ePub
Read Book Download Book
ads
Cucumbers, probably. We always forget to eat them, and that is their revenge.
The six blocks from Candelaria Road, where our condo is, to Annie Pat Masterson’s house at 315 Sycamore Lane is usually a fun and easy walk. Today, though, thanks to the PTA, I am thinking about this walk as
exercise
, which makes it seem like I’m doing another chore. I even ask my mom to drive me, since I don’t want to start my official training until Annie Pat and I get to the park, but Mom says no.
“Okay, okay,” I tell her, sounding grouchy. “I’ll
walk
. Even though I won’t get a prize.”
“You bet your buttons you’ll walk,” Mom says, laughing. “It’s a beautiful sunny day, Emma. And the fresh air and exercise will do you good.” Grown-ups always say stuff like that. Usually while they’re sitting inside, by the way.
“It’s windy out,” I complain, not wanting to give in so easily. “My hair will get all tangled up.”
This is not a very good argument, because my hair is
already
tangled up. It always is. Annie Pat and Kry say my hair is pretty, but it is so curly and long that it hurts—or
something
hurts, maybe it’s my brain—whenever my mom tries to comb it after a shampoo. And the wind will only make my hair situation worse.
But the wind makes no difference to animals. They always look perfect! This is just one more example of how great animals are. If people had fur instead of hair, we’d be a lot better off.
“Don’t worry,” Mom tells me. “I’ll brush your hair smooth when you get home. Maybe we’ll even go out for a pizza tonight! Let’s live it up for once.”
“Oka-a-ay, but don’t forget that I’m in training,” I say slowly, not wanting her to think she can win me over with mere pizza.
Although, of course, she can.
6
Best Friends
Eucalyptus leaves rustle above me as I walk down Candelaria Road. They release a strong cough-drop smell that makes me want to sneeze.
I like sneezing. It’s fun, if you have a tissue handy.
A few dried leaves tumble past my feet as I hurry down the sidewalk. Sometimes, when the wind blows like this, I feel like I am flying instead of walking. With each step I take, I bounce a little higher.
It would be so wonderful to be a kangaroo on a day like today! That’s the kind of mom I’d like to be someday, too, because kangaroos are marsupials, and a marsupial’s baby grows inside her pouch instead of in her belly.

It’s a much better system than the human method, in my opinion.
I like going over to Annie Pat’s for many reasons. For one thing, it’s a house, like Mom and I used to have, not a condo like we live in now. Sometimes I even pretend Annie Pat’s house
is
my house, and I have a mom and dad who live together in it. Un-divorced.
But I don’t tell Annie Pat that. Even best friends keep some things private.
Another reason I like going over to Annie Pat’s is because the Mastersons have a baby named Murphy, and he has red hair just like Annie Pat. Murphy is fun to watch, and he’s so new that he doesn’t bother us yet.
Another good thing about Annie Pat’s house is that her mom has to take care of Murphy all the time, so she leaves Annie Pat and me alone pretty much. And she buys really yummy snacks for us to eat, stuff I would never get at home. I think this is because she feels bad about ignoring Annie Pat ever since the baby showed up.
But I don’t think Annie Pat minds a bit.
In my opinion, Murphy is all plusses and no minuses for Annie Pat and me.
But the main reason I like going to Annie Pat’s house is because of Annie Pat herself. Like I said before, she is my best friend at Oak Glen, and Kry Rodriguez is my second-best friend, even though I would never say that out loud. I am not a feelings-hurter, unlike some people I could mention.
Cynthia Harbison and Jared Matthews.
Annie Pat Masterson is the second-smallest girl in the third grade, after me, and she is very bouncy, and she blushes a lot. Her hair is red, like I said before, and she wears it parted down the middle and pulled to each side in pigtails. She has navy blue eyes.
The best thing about Annie Pat, though, is that she loves nature, just like I do. In fact, she wants to be a marine biologist when she grows up. Well, she’d really like to be one
now
, only grown-ups don’t let kids do cool stuff like that. They keep those jobs for themselves.
I want to be a nature scientist, as I mentioned before. I don’t know yet what my specialty will be, but I’ve definitely eliminated reptiles, especially snakes and skinks. Also amphibians, even though it is extremely cool that they can breathe both underwater
and
on land. I wish I could do that!
I knock three times on the Mastersons’ red front door.
Mrs. Masterson swings open the door and holds it with her hip. She has baby Murphy cradled against her stomach. There is a snail-trail of white goo decorating her saggy green turtleneck shirt.
No offense or anything, but
eww.
“Emma! Welcome,” Mrs. Masterson says, giving me a big old smile—probably because since
I’m
here, she’s glad she doesn’t have to feel bad anymore about playing with Murphy all day, and not Annie Pat.
“Hi,” I reply, feeling shy as I try to think of something polite to say. “Murphy looks even bigger than the last time I saw him.” 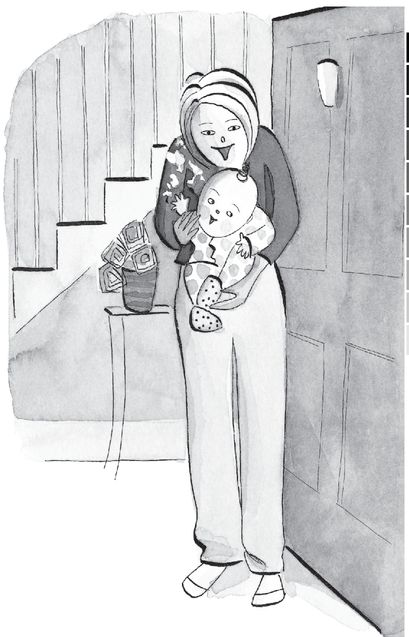 “Oh,” she says, and she turns Murphy around to face me. “Well, he probably is. Say hello to Emma, Murphy,” she tells him. “
Hewwo
,” she says, pretending to be Murphy.
This is very embarrassing!
“Annie Pat’s in her room,” Mrs. Masterson says. “She’s still pretty pooped from last night, because this little fella kept us awake with his crying just about all night long. He’s teething,” she adds proudly, nuzzling his neck.
“Oh,” I say. “That’s good. That he’s getting teeth, I mean, because he couldn’t eat corn on the cob next summer if he didn’t. Or even
off
the cob. Well, I’d better be going,” I say, edging toward the hall. I am trying to escape to Annie Pat’s room before Mrs. Masterson actually shows Murphy’s new teeth to me.
I’m interested in them, but not
that
interested.

Annie Pat is so tired that even her hair is drooping. A shriveled-up cornflake is stuck to her pajama top. “Whoa,” I say. “I guess your mom was telling the truth about last night.”
“Course she was,” Annie Pat says. “Whenever I started to fall asleep, I would dream there were these cats outside, fighting. But it was always Murphy. He makes a lot of noise for such a little baby.”
“But he’s not crying now,” I point out. “Why can’t he cry during the day, when everyone’s awake?”
“I don’t know. Why don’t you go ask him?” Annie Pat says, sounding a little sarcastic, in my opinion.
“Never mind,” I say quickly. “The important thing is that we get started on our training. You know,” I add, seeing the confused expression on Annie Pat’s face, “for Winter Games Day. Let’s go to the park and practice running or something.”
“If I tried to run now, I’d just fall over and start snoring,” Annie Pat informs me.
But she flicks a glance toward her awards corner, as if looking for empty spots.
“You’ll wake up,” I assure her. “Think of the prizes they’ll be handing out next week!”
“Yeah, if you
win
,” Annie Pat says. “You’re better than I am at that kind of stuff, Emma. Admit it.”
“No, I’m not,” I tell her. “Well, maybe I’m a little better. But I could help you train.”
“I wanted us to do something
fun
today,” Annie Pat grumbles. “Like, we could look at the comic books my dad bought me. Or we could draw pictures, or play a board game. Or maybe watch a video.”
“Watching a video isn’t going to make us any stronger,” I point out, also sounding grouchy—because Annie Pat talking about her father has made me remember
my
dad watching Lettice win her silver cup in London, England, last weekend.
And so I tell Annie Pat all about Lettice and my dad, because we’re best friends.
Annie Pat is quiet for a couple of minutes. “I think maybe your dad was just trying to think of something to write in his e-mail,” she finally tells me. “Or he wanted you to know how much he missed you. Or maybe that English girl is the only other kid he knows,” she continues, “and he thought you’d want to hear about her, for some crazy reason. It’s like when we go visit my aunt in Bakersfield, and she thinks I’m gonna love playing with her horrible next-door neighbor who stomps on snails—just because we’re both eight years old. Yeah, right!”
“Maybe,” I say slowly, thinking it over. “I don’t know. My dad does keep saying he wants me to come visit him in England someday.”
“There you go,” Annie Pat says cheerily, pulling on her jeans. “He probably pictures you and Lettice going horseback riding together.”
“Well, he can think again,” I say, scowling. “I’m not going horseback riding with some—some
champion
, when I’ve only been on a horse once in my entire life, and that was a disaster, because my legs were so sore the whole next day that I walked like Frankenstein’s monster. Do I want to look bad in front of my very own father?” 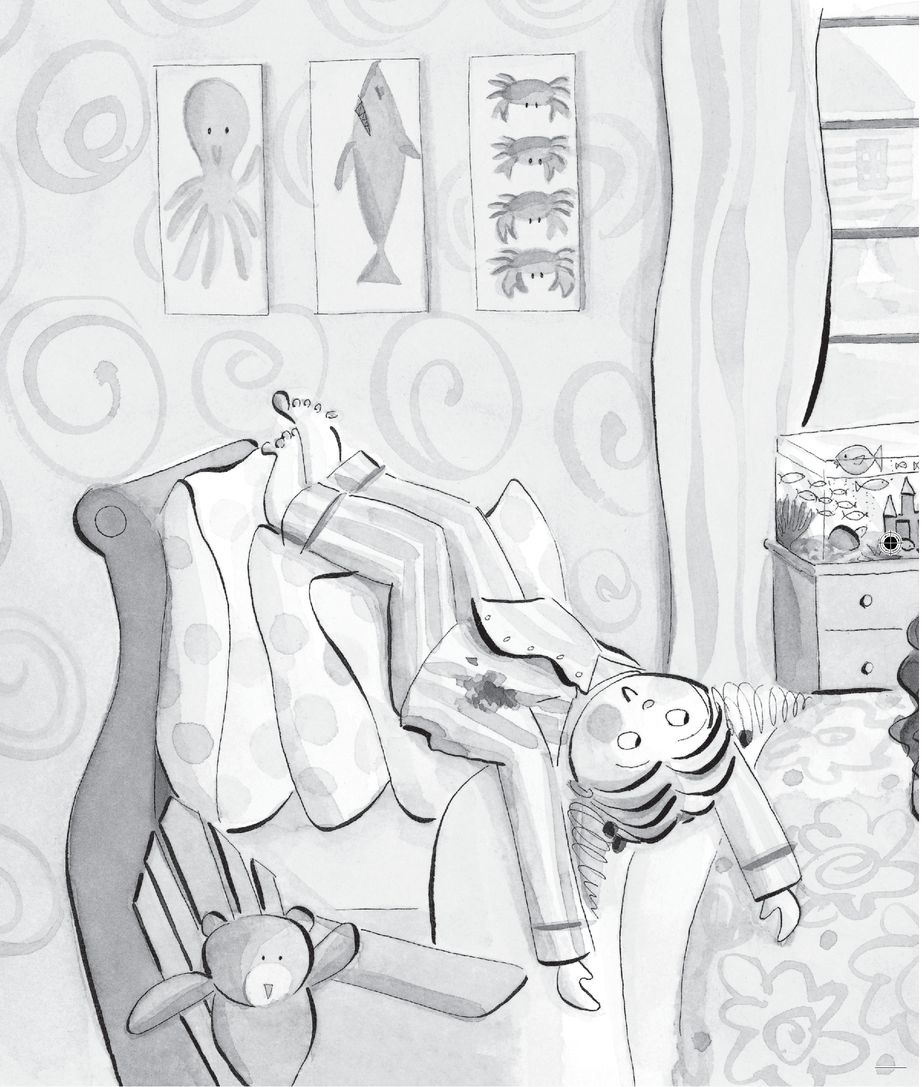 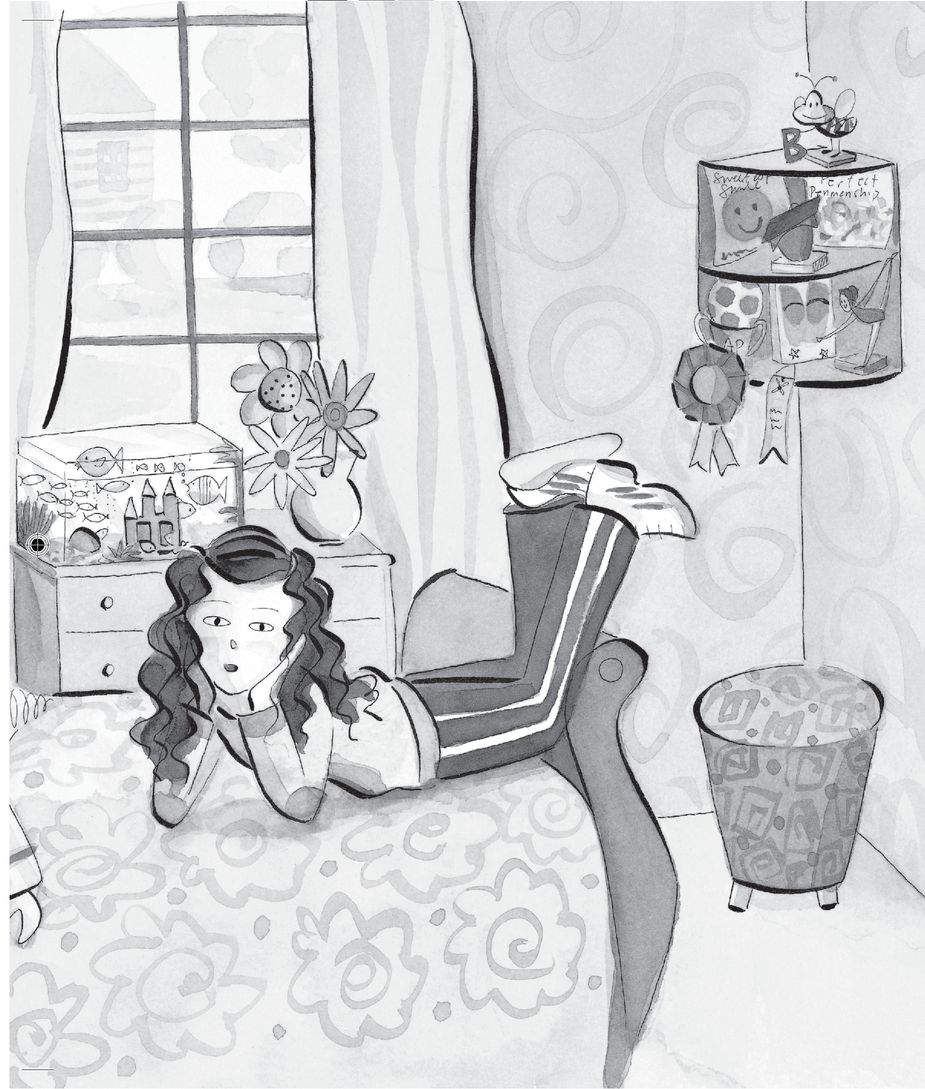 Beneath a Southern Sky by Deborah Raney
The Name of the Game by Jennifer Dawson
City of Ghosts by Bali Rai
The Second Prophecy (Part 1 of the Dragdani Prophecies) by R. Alan Ferguson
Flames of Awakening: Faemoch Cycle Book 1 by Reynolds, Michael
The Deadly Space Between by Patricia Duncker
Closest Encounter by E.G. Wiser
The Dark Knight (Apocalypse Weird 2) by Nick Cole
Voices at Whisper Bend by Katherine Ayres
Forty Thousand in Gehenna by C J Cherryh
Our partner