BOOK: Excellent Emma
4.6Mb size Format: txt, pdf, ePub
Read Book Download Book
ads
“How do I look?” Heather asks Cynthia, who of course is dressed in a brand-new outfit bought especially for Winter Games Day—even though Ms. Sanchez told us to wear old play clothes and comfortable sneakers.
“You look adorable. But you have some lettuce stuck on your front tooth,” Cynthia says, not giving Heather and her purple track suit
or
her tooth a glance. She just
knows
these things, I guess
.
And Cynthia doesn’t bother to ask Heather how
she
looks, because Cynthia knows that her outfit—the matching velvety sweatpants and sweatshirt with big glittery flowers on them—looks cute.
I am wearing red, white, and blue, like I am in the Olympics. I figured it couldn’t hurt, and it might help! Jared saluted me this morning, but I just ignored him.
Annie Pat is wearing green pants and a green top. I think she is hoping she will blend in with the grass, and no one will notice her.
I have tried to improve her attitude, but there is only so much a person can do.
Around us, the boys in our class are shoving each other and shouting, which I guess is
their
way of warming up. None of them looks nervous, and no boy is asking any other boy how he looks.
Typical boy behavior. If I had my nature notebook with me, I’d write it down.
Twe-e-e-et!
The sound of Ms. Sanchez’s whistle pierces through our excited chatter at exactly twelve thirty. “Gather on the playground, third-graders,” she calls out, a big smile on her face.
When we get to the playground, which is half grass and half cement or something, lots of parents are waiting, including my mom. I give her a secret wave.
“It’s time for Oak Glen School’s First Annual Winter Games Day,” Ms. Sanchez tells everyone, “and we only have about two hours to finish our three events
and
have the awards ceremony and celebration afterwards, and still get out of school on time. And knowing these boys and girls, we’ll need every second,” she adds, smiling at us kids. “But first, Fiona’s father has something special to pass out to all you participating athletes. Mr. McNulty?”
A big man I have never seen before steps out from behind a bunch of people. He is carrying two boxes, on on top of the other. “Hey, kids,” he says, greeting us.
Fiona shrinks back behind Kry, trying to be invisible. She’s shy. Even about her own dad, I guess.
“Hey,” a few of us reply cautiously.
“I am happy to honor you all today by giving you either a cap or a kerchief to wear and keep, courtesy of McNulty Extermination, located right here in beautiful Oak Glen since 1995 to take care of all your extermination needs,” he tells us.
I don’t think I have any extermination needs. I’m not sure, actually.
Fiona’s dad turns to the grown-ups in the waiting crowd. There are a lot of them standing on the playground, including EllRay’s mom with a cute little girl; Mrs. Masterson, holding drooly baby Murphy, of course; my mom; and Mr. Timberlake, the handsome man our beautiful teacher is going to marry someday. We hardly ever get to see him in person.
Mr. McNulty opens the brown cardboard boxes to show us all what is inside.
There is what is supposed to be a big dead bug on each cap and kerchief, but Mr. McNulty’s so-called insect only has four legs, not six, so he got it all wrong.
Annie Pat and I know better, so we look at each other and bite back our smiles.
“Cool,” a couple of boys murmur, impressed by the dead bug.
“Do we have to pay for them?” Jared asks suspiciously.
“No, son, they’re absolutely free,” Mr. McNulty says. “Now, who wants what? There’s plenty to go around.”
“Quickly, children,” Ms. Sanchez calls out. “Tick-tock!”
And so we dive on the boxes and start grabbing. Most of the boys want caps, and most of the girls want kerchiefs, but not always. Kry chooses a cap, for instance, and puts it on backwards, making her look even cuter and cooler than before. And Stanley rolls up a kerchief and ties it around his forehead so that he looks like a Native American warrior, which is also cool.
And finally, finally, it is time to begin! I get ready to prove to everyone—especially to my faraway dad—that I am excellent. This is big. For me, anyway, because there is so much at stake. 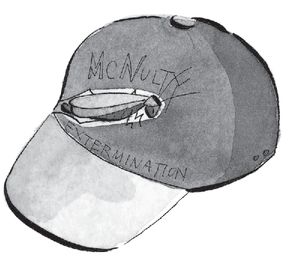 I really need to win.
10
The Jumping Contest
The first contest—distance jumping—will be done four kids at a time, Ms. Sanchez tells us, with an adult volunteer measuring each kid’s jump. A math wizard will then somehow compare each kid’s jump to how tall the kid is, and then they will announce the first- and second-place winners for the boys and for the girls.
“Okay,
jump
!” Ms. Sanchez shouts to the first batch of kids.
Jared tumbles forward on purpose after he leaps, and he scoots his foot a few inches forward when he falls. “That’s cheating,” EllRay cries, because he was the next kid over, and he had a really good view of the whole thing.
Most of us saw it, in fact, but Jared is not tossed out of Winter Games Day—which is what I would do if I were in charge of things.
Grown-ups are never as strict as kids would be if they had that kind of power, that’s what I think.
Instead, Jared’s measurer just marks the correct spot. But Jared accidentally-on-purpose shoves EllRay when they are trotting back to join the rest of the class at the edge of the big lawn, and In the second batch of kids, Fiona springs forward like a little cricket—and then crumples immediately to the grass, clutching at her ankle. But she lifts up her head to peek around and see whether or not everyone has noticed, so I know she’s faking. 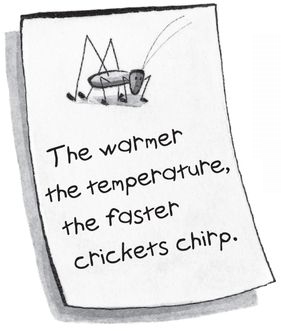 “Ow-w-w,” she moans loudly.
“Oh, Fiona,” her mom cries out, streaking so fast across the lawn—like a gazelle!—that I’m glad
she’s
not in any of the contests. “Are you okay, my brave little sweetie-pie?”
“I will be tomorrow, probably,” Fiona says, sounding courageous and wounded at the same time. “But, oh no!” she exclaims, like the thought just occurred to her. “This means I can’t do any more events.” And her mom and the volunteer measurer help Fiona limp back to the edge of the lawn, where Heather and Cynthia take over soothing her and staring at her ankle, waiting for it to swell.

Don’t hold your breath, that’s all I’m saying.
Kevin and Kry and Corey are in the next batch of kids in the jumping contest, and to our combined amazement, Kevin McKinley stuns us all by jumping really, really far. Corey and Kry jump far, too, but that isn’t such a surprise, because they’re both very good athletes. Nobody gets mad at them for doing well, of course, but for some reason, Jared is furious with Kevin. “What are you tryin’ to do, make me look bad?” he asks, sneaking a peek at the parents clustered on the sidelines.
“I’m sorry,” a surprised Kevin says. “I don’t know what happened.”
But he looks just a little bit proud.
I am in the next batch of kids, along with Annie Pat, Cynthia, and Heather. “Good luck,” Annie Pat whispers to me.
“Same to you,” I say back at her, rocking back and forth in place to get ready.
And then it’s my turn, and—
I jump
!
I slice through the cool December air, and when my feet finally hit the earth again, I try to dig in so I won’t fall forward like Jared, or collapse in a little heap like Fiona. And when I look around, I see that I have jumped farther than Annie Pat, Cynthia,
or
Heather. 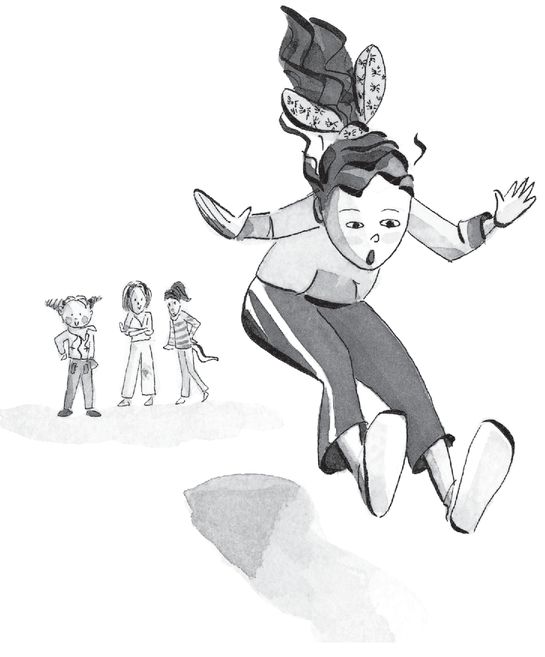 And I’m the shortest one of them all!
“
Yes-s-s
,” I whisper to myself as the volunteer measures how far I jumped.
Take that, Lettice Wallingford! You don’t need to be “just like a daughter” to my dad, because he already
has
a daughter.
My batch of kids trudges back to the rest of the class. “Show-off,” Cynthia mutters to me. “You cheated. You practiced, and you—you
tried
.”
“Yeah,” Heather says, exchanging outraged glances with Cynthia. “No fair
trying
. Tomboy.”
I wait for Annie Pat to come to my defense, but she doesn’t say anything. She just looks sad, as if she can see her jumping prize flying away on little white wings—straight out of the awards corner in her room.
I feel bad for her and everything, but I don’t say a word. I’m too busy worrying about my own problems—because of course I don’t really know if I’ve won an actual prize yet. Like I said, they’re going to announce the winners as soon as they get it all figured out.
So here is the only score I know so far: Annie Pat is miserable, Fiona is “injured,” Jared cheated and is mad at Kevin for doing well, and EllRay and Cynthia are also furious with someone.
Way to go, PTA. We were perfectly happy, until
you
came along.
“Attention, everyone,” Ms. Sanchez calls out, waving a clipboard in the air. “I have the winners here!” We all gather around.
“For the boys,” she announces, “it’s Kevin McKinley in first place, and EllRay Jakes in second place.”
“Yay!” almost everyone shouts, especially Kevin and EllRay.
My heart starts to pound.
“And for the girls,” Ms. Sanchez calls out, “it’s Emma McGraw in first place, and Kry Rodriguez in second place!” People seem to be cheering, but I can barely hear a thing, I am so excited.
I actually won a prize.
11
Running
Next comes running. “There won’t be any special calculations for this event,” Ms. Sanchez says. “So you boys and girls will race together—but in two batches. The grown-up volunteers will be at the finish line to pick the fastest two kids in each race,” she tells us. “Then there will be a run-off between the final four kids. And prizes will go to the two fastest kids, boy or girl.”
“Good luck,” I whisper to Annie Pat, who is in the first batch of kids—but she comes in sixth.
Uh-oh
, I think, because I told her she was going to win for sure.
Kry Rodriguez comes in first in that race, naturally, and Heather—
Heather Patton,
who is so nervous about doing everything perfectly that she can barely even move!—comes in second.

War of the Princes 03: Monarch by A. R. Ivanovich
Password to Her Heart by Dixie Lynn Dwyer
A Father's Love by David Goldman
White Feathers by Deborah Challinor
As Love Blooms by Lorna Seilstad
A Shelter of Hope by Tracie Peterson
Hilda - Snow White revisited by Paul Kater
Rounding Third by Meyer, Walter G.
Three Evil Wishes by R.L. Stine
The Alpine Traitor by Mary Daheim
Our partner