BOOK: Excellent Emma
5.85Mb size Format: txt, pdf, ePub
Read Book Download Book
ads
Next thing you know, they’ll tell us kids that our assignment is to
breathe
—and then we’ll all want to hold our breath until we turn blue.
I tug the soft yellow blanket up to my chin and listen to the
tick-tick
of the rain outside and the
tick-tock
of the old clock on a nearby table. Every so often the wind swirls by, and the eucalyptus trees creak and groan as if they are complaining about having to stay outside on such a miserable night. 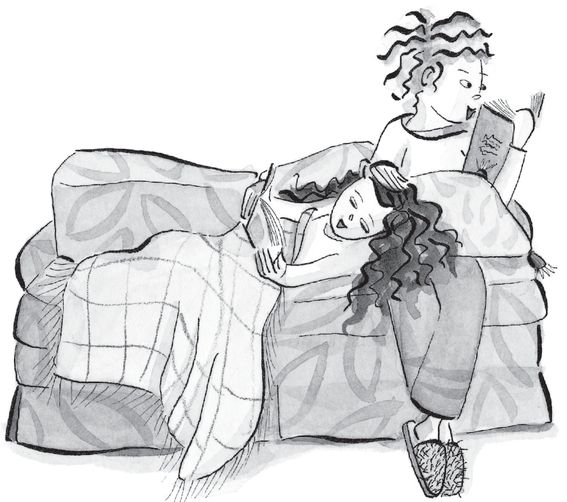 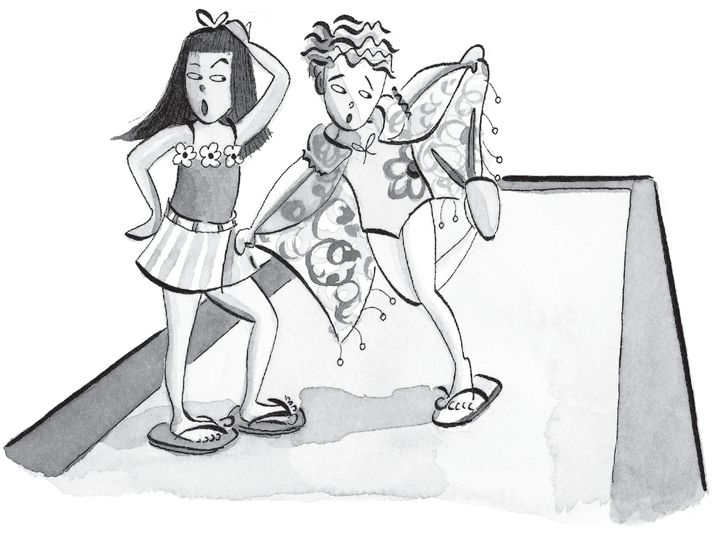 “Nancy said
her
bad word in front of Grandmama—and about two hundred other ladies, who were all dressed up,” Mom says, still laughing. “So even though the whole fiasco was my fault, and even though Nancy was a whole lot prettier than I was, I was the one who ended up looking better that day.”
“Yes-s-s! You won,” I say, pumping my fist in victory the best I can while still lying down. “And no one could be prettier than you,” I add loyally.
“Thanks, Emma,” Mom says, making a move to get up from the sofa—because by now, it’s way past my bedtime.
“No, wait,” I say, pressing my head down harder on the flowered pillow to keep her there. “Let’s stay here a little bit longer, okay Mom? And listen to the rain? We don’t have to talk or anything.”
“Okay,” Mom says. “We’ll think slow for a little while.”
“Think slow,” I agree.
And dream about tomorrow,
I add silently, crossing my fingers.
9
A Big, Dead Bug
The little kids in kindergarten, first, and second grades were busy with their games day all morning, because our school only has one playground. Our games day, the
real
one, starts right after lunch, which we are just finishing, or trying to finish, because a few of us—me, anyway—are too nervous to eat. I feel as if I have a small flock of cabbage white butterflies in my stomach.
I could barely finish my peanut-butter-and-lettuce-on-a-bagel sandwich.
We will share the still-damp playground with fourth- and fifth-grade kids. Each class will compete on its own, thank goodness, because a lot of those fifth-graders are huge! You could fit two of me inside some of those gigantic boys and still have enough room left for a couple of baby Mur-phys. Or Murphies, whatever the plural of him is.
But Ms. Sanchez told us that the jumping contest will be fair, because the judges will compare how short you are with how far you can jump.
It’s hard to explain, but maybe you get the idea. I sure don’t.
“This is gonna be
awful
,” Fiona moans as she drops her almost-full lunch sack into the trash. “People shouldn’t make other people do dangerous sports when those people have weak ankles.”
I sneak a peek at Fiona’s ankles. They still look like pink pipe cleaners to me. I sincerely hope Fiona doesn’t end up looking like a kindergarten crafts project gone wrong by the end of the afternoon, with her feet pointing every which way. I mean, we aren’t best friends or anything, but I don’t want her to get
hurt
. 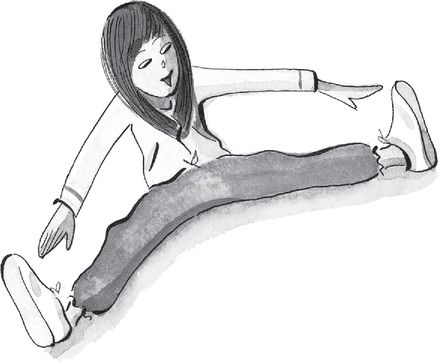 “You’ll do okay, Fiona,” Annie Pat says, patting her shoulder sympathetically.
Kry Rodgriguez has started doing some stretches and lunges that are making me nervous, because she looks like she’s been practicing in secret, too, like Annie Pat and me. So I touch my toes a few times to look like I am also warming up. 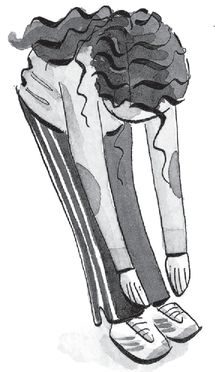 “Psst,”
I say to Annie Pat, and she does some stretches, too. But she’s acting like she’d rather be someplace else, doing
anything
else. 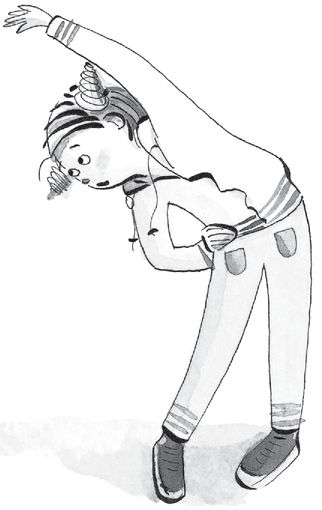