“Yeah. You still won,” Annie Pat says, thinking it over. “And you can still tell him about it when you guys e-mail each other,” she adds. “But—what about your mom? Won’t she be mad if you give away your best award?”
I look over at my mom. She still has baby Murphy in her arms, but he has fallen fast asleep on her shoulder. It looks like she’s holding a little sack of potatoes with red hair on top. Mom is laughing quietly, and talking to a bunch of the other moms, but then she glances over at me and waves.
“I love you,”
she tells me, silently mouthing the words.
I smile at her and wave back. “My mother won’t care,” I tell Annie Pat. “In fact, she’ll probably say it was the exact right thing to do.” 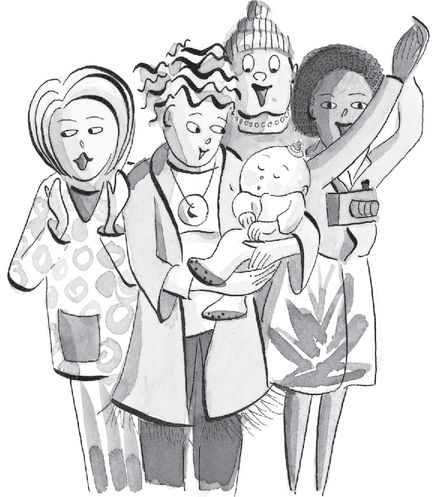 14
Almost Like a Daughter
“Why did you want to win so badly yesterday, sweetie?” Mom asks me the next night, Saturday, when she is tucking me in. It is raining again, but I feel nice and cozy.
“Because I couldn’t afford to lose,” I confess. “No one could. Not with all the parents there.”
“
What
?” my mom asks, obviously trying to get it.
“It’s true,” I tell her. “Annie Pat
always
wins something, no matter what she does, so how could she start losing all of a sudden? You should see all her prizes, Mom! And Cynthia Harbison couldn’t risk losing a contest in front of her mom, because her mom is always saying how perfect she is. And I don’t know why,” I add, “but Heather can’t stand to see Cynthia lose
anything
. And I think Fiona was so freaked out about the
idea
of not winning that she didn’t even want to try.”
“Hmm,” Mom says, frowning.
“And the boys were even more worried than the girls were about losing,” I continue eagerly, wanting her to understand. “I mean, it’s not right that Stanley has to be embarrassed in public, just because he’s too chunky to win a race. His parents think he’s good at everything! How much pressure is
that
? And Jared needs
us
to think he’s so great, for some reason, but only Kevin really thinks Jared is.
So great
, I mean. And you can tell that EllRay hates being short. He shouldn’t have to be a loser, too, on top of that.”