The Road to Nevermore (13 page)

Billy kept his eyes focused ahead as they made their way across the bridge. Whenever he peeked over the rails it felt as if
the depths were wrapping around his wobbling knees and pulling him toward the edge.

From halfway across the bridge, the residents looked like insects, scurrying in and out of temples, shops, and hovels. Billy
was pretty sure a number of them
were
insects, but much larger than the garden-variety bug.

Diabolis proper (if one really can use that word) was a tumult of demons and lost souls. In general everyone paid little attention
to anyone else—at least until they were hungry.

Billy realized they wouldn’t have made it past the city’s threshold if it hadn’t been for Ned. The skeleton and his very busy
staff had cut a path through every crowd.

“Where are we headed?” Billy asked Pete as Ned’s staff sent another demon arcing over the crowd.

The old pirate glanced at Government Hall overhead. At the point where it arched above the Dark Side wall, its unswerving
architecture had changed into snaking shadowy curves. “The Receiving Department’s up that way. But first, we got to pass through
that thing over there.”

Billy traced Pete’s eye line from Government Hall to the place where it intersected the top of a mountainous building shaped
like a demon head. It towered over the shopping district, about a quarter of a mile away. But the size of the thing made it
feel much closer. The building’s stone eyes seemed particularly attentive, and Billy thought he saw the mouth grow a little
wider.

A tentacled demon with wiggly eyestalks tripped Billy. “Watch your step!” it burbled. “Maybe I should teach you some manners!”

It changed its mind, however, when it saw Ned’s staff, and hastily skedaddled into a nearby deli. There were other eating
establishments at hand, crawling with customers and even crawlier food. Inside, patrons enjoyed their victims with fine wine
rather than grabbing a quick bite out on the street.

Marshmallow shops were especially trendy here, as were roasting-stick shops. There were tourist traps, too. Billy was appalled
to see some Lightsiders caught like flies on a huge sticky web.

But it was a ghost family—a mother, father, and daughter—that drew Billy’s attention with their stares. Like the squirming
tourists, it was clear they were from the Light Side. The father glanced at his copy of the
Eternal Bugle
and then at Pete. Before Billy could warn anyone, the father shouted, “I recognize you. You’re a traitor!” He corralled his
wife and daughter and pulled them away. “I’m getting the authorities!”

The daughter stammered, “C-come off it, Dad. Leave them alone!”

In another situation and at another time, Billy thought he would have liked this girl. She was as spunky as Millicent in the
way she stood up to her dad. But the thought of Millicent only made him worry more. Was he already too late to save her? Was
Uncle Grim done for, too? As Billy tussled with these dark thoughts, the family disappeared in a shimmer of gold light.
Looks like we aren’t the only ones sneaking wishes.

Angry shouts ripped toward them from a half block away. Billy looked up. “Uhm … I think we should go.” He retreated, his boot
clinking ever so slightly.

Two sentinels were moving toward them, parting the crowd like seagoing steamers.

“You better hope they pass,” Ned hissed, “or you’re on your own!”

Pete traded nervous looks with Roger but didn’t let Billy see him. Uncle Mordecai and the rest of the conscripts huddled together,
pulling as far away as their chains would allow. Even Ned bit a bony knuckle.

“Criminy!
Look
at those two!” If Billy had been wearing his body instead of bones, his heart would have been thumping like a timpani drum.

The sentinels arrived, riding on two gigantic spiders. The first demon must have stood a story tall, the second, a half a
story taller. Each sentinel was covered in ruby-colored scales transparent enough to show pulsing organs beneath. Their domed
helmets could have been from ancient Greece, and the leathery wings hanging from their backs could have made fine mainsails
on the
Spurious II
. Billy tried to disappear into Pete’s coattails.

The crowd jostled elbows as it pressed back. One spindly demon wearing a smoking jacket lost his cigar in the confusion. It
bounced off paving stones and rolled to Pete’s boot. Billy untangled himself from coattails and looked down. And that’s when
his good nature got the best of him. He picked up the cigar and handed it back. The demon snatched it, a look of confusion
blinking in its button-sized eyes.

“No man shall a good deed do,” rumbled the first sentinel in a voice so low it could have bubbled up from the earth’s bunions.

“Nor woman, child, or demon, nor any creature fair or foul,” the second sentinel added. They spoke mechanically, as if every
thing they said was by rote. “It is the first and only rule.”

“Well I should say that covers just about everyone.” Roger eyed the guards with defiance. “Except for us. We’re Lightsiders.”

Rules? Here?
Billy scratched his head. His ivory finger sounded as if it were writing questions on a blackboard.

They thumped down from their saddles, each holding a long spear with a crescent blade. “Silence, skeleton!” The smaller sentinel
swung his spear blade an inch from Roger’s nose holes.

Billy looked around, wondering who had said such an ill-advised thing. Then he realized the words had leaped out of his own
mouth. Splitting the air in a whoosh, the sentinels’ spears now pointed an inch from
his
nose holes.

“Here’s the un-troublemaker.” The lead sentinel nodded to the bigger one. “Do we take him to the inquisitor for questioning?
Or eat him here?”

Billy stepped back nervously. His boot clinked. Such a tiny sound, but it was loud enough to send Billy’s fortune in the decidedly
wrong direction. Starting with upside down. The bigger sentinel raised Billy high overhead and shook him like a piggy bank. 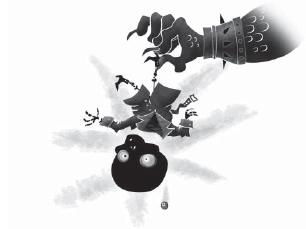 Clinkety-tink.
Billy’s golden coin danced on the cobblestones. His hope for escape spun on its rim and rolled away. The crowd surged forward.
Uncle Mordecai’s eyes sparked green as he yanked the chained ghosts into the fray. But the smaller sentinel swept up the coin
before anyone could get to it.

The larger sentinel dropped Billy bottom-first and scooped up Pete and Roger. A few shakes later the sentinels had retrieved
every coin. Billy scrambled to his feet, furious at himself for not doing a better job of hiding his wish. But there was nothing
to be done about it—no going back now.

The smaller sentinel clinked the coins in his palm as if trying to decide what to do with them, and then he rumbled, “We must
take these Lightsiders below for interrogation.”

“Sorry to be so disagreeable,” Roger piped in, “but that would be highly inadvisable.”

Billy thought Roger seemed awfully cool about it, seeing as they were about to be introduced to the inner workings of a blast
furnace.

“Inadvisable?” the smaller sentinel asked. “And why would that be, skeleton?”

“Because”— Roger stifled a yawn —“we’ve been asked to bring this fine new soul to Shadewick Gloom.” He gestured to Martha’s
uncle.

Both sentinel helmets turned robotically toward the old man.

“Ye best get him to Gloom’s office straightaway. He’d be mighty sad to hear that ye delayed us.” Pete snuck a smile toward
Billy.

The smaller sentinel’s empty helmet scanned Pete up and down and then turned to his partner. “I will take the conscript to
Gloom. You take the good-deed doer to the inquisitor.”

Billy screwed up his eyes, straining to think what to do. And once more, the truth served him. “Oh, he’ll want to see me …
and my friends!” he said, sweeping a hand toward Pete and Roger: but missed Ned, who was doing his best to blend in with the
conscripts.

Pete was quicker to recover. “The lad’s not pullin’ yer tails, neither.” He frowned at the sentinels. “Has a standing invitation
by Gloom’s office whenever he’s in the Dark Side.”

“I’m sure he’d be furious if you didn’t let me see him,” Billy said with loads more confidence than he felt.

“Where is everyone?” Billy asked Pete. “This place looks deserted.”

Billy had always imagined that Government Hall would be filled with the churn of administrative activity. At least that’s
how his parents and Mr. Benders had always described it.

“Not a lot for these bureaucrats to do, I suspect.” Pete looked around. “Ye heard the sentinels say there’s only the one rule
’bout not doing good deeds.”

Billy, Pete, and Roger stood near the door of the Receiving Department, trying to look as inconspicuous as possible. They
had no wish to be invited inside. Thanks to the sentinels, they had no wishes at all. Uncle Mordecai stood a few paces away,
still wearing shackles. His chains clinked gently each time he sneaked a nervous glance into the office.

Ned had insisted that the sentinels stop at the Receiving Department, before he turned over Mordecai. He also had pointed
out that it was his duty as a Skeleton Guide to return to the Light Side once his prisoners had been discharged.

The trip up to Government Hall had been uneventful, if you consider a clattering ride suspended over a pit of flames an everyday
activity. The sentinels had been monstrously rough with the crowds as they escorted Billy and company through the streets.
But they had been almost tender with their spider mounts as they urged them up the walls of the elevator shafts and then into
the long hallway, where they were silently standing guard. 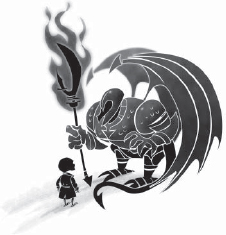 Looking up at the demons, Billy scratched his head. “They’re awfully good at following orders.”

A
BANDON
H
OPE
, A
LL
Y
E
W
HO
E
NTER
(
THEN SURRENDER THE REST OF YOUR PERSONAL EFFECTS
) was chiseled into the stonework above the entrance. Roger told Billy that the last living person to visit the Dark Side
had come up with the first part of the line—some Italian fellow, Dante. The demons had just loved the quote.

Inside the office, a chubby demon wearing a singed waistcoat and a very bored expression stamped the ghosts’ paperwork. Every
time the stamp rapped paper, the documents burst into flames and the ghosts standing before him transformed into the most
gruesome shapes. Some grew horns and tiny bat wings (like the chubby demon), some tentacles or tails, and others multiple
eyestalks with big dripping fangs. Back in the hallway Uncle Mordecai paled and turned away from the door.