The Road to Nevermore (10 page)

Not much had changed at the Boneyard. Roger took a long draw on his pipe. Smoke leaked from the sides of his jaws and though
his nose and ear holes as he spoke. “Like I said. There is a way to get to Nevermore. The boy’s already mentioned the one
who can get you there.” His eye drifted to Billy along with his pipe smoke.

Pete considered Roger through shrewd lids. “Shadewick Gloom? And how did ye come by such information?”

“The Jollys are well connected. Better than you might imagine. Real bluebloods we’d be, if we
had
any blood.”

Ned leaned on one elbow, and then the other, then tapped fingers and toes. It appeared to Billy that Ned might have heard
how terribly well connected the Jollys were a few times before. 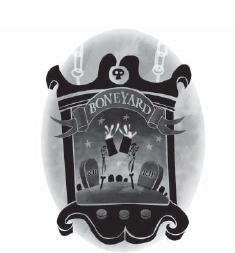 Roger banged on. “Skeletons have always been good with shadows. Like the way we use them to place secrets-closets in houses
short on storage space. But Gloom’s experiments have taken shadows to places never dreamed possible. It didn’t take much to
figure out he was behind Nevermore.”

Roger cocked a look at his fellow skeleton. “Most people have no idea he used to work for the government.”

“I knew that,” Billy blurted. “My Uncle Grim used to work for him. Gloom called him his ‘old assistant’ when he attacked us.”

“What the lad said is a fact.” Roger addressed the others. “Gloom’s story didn’t get out. The Investigative Branch killed
it in the press.”

Pete absentmindedly twirled one of his ghostly curls. “How about getting us to Nevermore?”

“The safest way to enter,” said Roger, “is through the Gate of Darkness.”

Jiminy!
Billy grimaced.
Don’t like the sound of that!

“That will take us directly to Diabolis, the Dark Side’s capital city. As for Nevermore, that’s where family connections come
into play again,” Roger explained. “It seems, every so often, Shadewick Gloom separates some new soul from the pack for a
personal welcome.”

“I can vouch for that,” Ned offered. “Seen ’em cut from the herd myself. After we’ve turned them over to the Receiving Department,
of course. Haven’t lost a soul on
my
watch yet.” He tapped his chest bones proudly.

Roger continued, “So it’s a matter of getting up into Government Hall. Then we tag along with Ned to the Receiving Department,
and
finally
bluff our way to Gloom’s office. After that, you’re on your own. I plan to wish myself back.”

Doesn’t sound like much of a plan.
“What happens when we get there?” Billy looked at Pete with alarm.

“That’s where we’ll employ a little pirate stealth,” Pete said casually. “Don’t ye think I learned a trick or two in all me
years at sea?”

But at this, even Jenkins squawked skeptically.

Ned dipped a look toward Roger. “I’ll get you to the Receiving Department and that’s it … even if it means less gold in my
pocket.”

“Well I’m going every bit of the way,” Billy insisted. His resolve felt pieced together by plasters and splints, but he promised
himself he wouldn’t let Millicent down no matter how his knees wanted to wobble.

As the group prepared to leave, Minnie Lumbus wished her son a stiff (even by skeleton standards) goodbye, then turned to
Billy. “You take care of Pete, you hear?” She sniffed and wiped a foggy tear with her sleeve. “And take care of yourself,
too. There’s a mighty big chance I’ll never see you again if you make the smallest slipup.” She patted Billy’s bottom, pushing
him on his way. “So don’t!”

On his way out, Pete reached up for a package on top of the coat rack. It was wrapped in brown paper and string, but Billy
was sure it contained something special.
Some kind of magical talisman to ward off evil? Or a cloak to make us invisible?

“Ye’ll just have to wait and see,” said Pete, his glass eye glimmering.

Shadewick Gloom snatched Millicent’s hair and glided her farther into the depths of Nevermore. It was a discombobulating sensation,
even for someone not altogether there. Along with the tombs and tippy mausoleums, some plots were filled with freshly dug
graves. Scattered here and there were a number of smaller structures housing underground burial chambers. Shadewick’s smile
was especially fond whenever they passed these crypts.

Not everyone was trapped inside. Several blocks away, a small group of groundskeepers were pruning hedges, digging holes,
and raking dead leaves. Sniffing the air, they turned slowly as Millicent and Gloom passed.

A battered skeleton was digging a grave. He was only a head taller than Millicent. At first she thought he was a skeleton
boy, but on a second examination, he moved like an older man. The skeleton paused as they approached. A gelatinous gob encased
his head, held on by a squishy mass of tendrils. 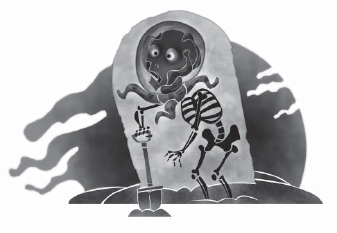 As architect of Nevermore, Gloom took delight in explaining such things. He dangled Millicent over the lip of the grave and
held forth. “That, my dumpling, is a dread.”

“How kind!” Pleasure shimmered through Shadewick’s smile as he gestured toward the skeleton’s head. “See how the creature’s
sack envelops the victim and the tendrils reach inside to penetrate the brain? Saddled up there on the head, the dread plants
fear like seeds, then reaps the resulting nightmares and screams. Being trapped by a dread is the worst way of all to spend
your eternity here in Nevermore.”

“But, why do you need dreads? This place seems bad enough,” Millicent asked, literally breathless.

“Why? What a ridiculous question, my dear … you might as well suggest prisons abandon their guards, or the dungeons dispense
with their thumbscrews. Outrageous!”

He chuckled as he leaned over the grave, inspecting the skeleton’s work, and continued, “Along with keeping us well stocked
in nightmares, they’re very useful for keeping order around here. They can shatter the wills of my most resistant guests.”

Inside its gelatinous casing, the dread unwrapped its tendrils from the skeleton’s head, then probed them hungrily toward
Millicent and the shadow hounds.

Shadewick jerked Millicent back from the grave’s edge. “Such greedy things. Once they’ve defiled a victim, they’re instantly
hungry for something fresh … wouldn’t want one latching on to you … leastwise, not yet,” he snickered, dragging her to the
carriage road.

Millicent looked back at the grave, with more white in her eyes than a hen’s egg.

“For now, you’ll take up residence in the snug little crypt right over there. And Tongs will be nice enough to keep you company,
won’t you, boy? Yes, you will. Such a good, little, snarly, ripping, vicious doggy you are, tooooooo.”

Tongs wagged his tail, prancing with excitement, but when he turned to Millicent, he was all business—big spiky teeth business.
And that’s how he continued to regard her as he and she were installed into the crypt. From the outside it looked like a small
classical temple. Inside, a large stone staircase limited floor space. It led to the dank vault below.

Despite Tongs’s watchful eye, Millicent managed to get close enough to the barred windows to see Gloom stop to admire the
statuary lining the roof and other ornate touches, then sweep off toward the shadowport with Hammer frisking at his side.

Millicent drifted, rubbing her forehead and thinking,
All in all, this is NOT a very nice place.

Chapter 16
By the Bell of St. Dunstable

Through Houndstooth-on-Codswattle they came, scores of skeletons, clattering into the graveyard next to St. Dunstable’s. In
its long history, the blocky Norman church had never seen such an unusual flock.

Mr. Bones surveyed the crowd with growing annoyance. What had him nettled was not the skeletons, most of whom had shown up
on time. It was the church bell. Vicar Parsons had been ringing it when time stopped, locking the bell in a long
CLONNNNNNNNGGGG
ever since. The old codger stood frozen in the tower, oblivious to hundreds of skeletons rattling by.

At least Mr. Bones could count his blessings about the rain. The drops were still stuck in place.

Mr. Bones nodded to the Bunyons, residents of a local farmhouse, as they and their sons elbowed to the front of the crowd.
The Headleys were also there, from the manor next door.

A few feet away, Mrs. Bones chatted with Mrs. Wormwood, the skeleton in charge of the town mortuary. Mrs. Wormwood was deaf
as a deadbolt, so Mrs. Bones was forced to yell into her ear horn. Mrs. Bones excused herself with a genteel shout and took
her place beside Mr. Bones.

The churchyard was well past capacity by now. Many skeletons were forced to clamber up on the crumbling walls or balance on
tipping headstones. Mr. Bones consulted his pocket watch. Being set to Afterlife time, it was ticking merrily along.

“Right!” he clicked the lid shut and addressed the crowd. “Ladies, gentlemen! Your attention,
please
!”

But the crowd was still in a talkative mood.

He began again, “There
is
an F.A.D. emergency.” Skeleton jaws stopped clacking. “And this is of particular importance to me because my brother, Grim,
is the missing field agent.”

How to Run with a Naked Werewolf by Harper, Molly
Deep Blue (The Mermaid Chronicles Book 1) by J Turbett
Nikki by Friedman, Stuart
The Search by Margaret Clark
All Over You by Sarah Mayberry
Playing with Food by K.A. Merikan
The Beginning by Jenna Elizabeth Johnson
Broken by Delia Steele
My Heart's Beat (Hard Love & Dark Rock #2) by Ashley Grace
The raw emotions of a woman by Suzanne Steinberg
Our partner