The Road to Nevermore (9 page)

“The engineers are always talking to us like we’re children,” Mr. Benders chattered. “There’s two whole paragraphs explaining
the history of existical energy and eternal energy—real basic stuff. It says how millions of years ago, when the first living
thing died, it released the two magical energies: one that powers the magic of Earth and the other that powers the Afterlife.
There’s a bunch of blah, blah, blah technical stuff after that, but the upshot is that neither of these energies are being
produced at the moment because nothing’s dying. Seems a time stoppage on Earth is the cause.”

“I should say!” The oversecretary sighed wearily—ignoring the fact that his old friend had been reading notes as well as delivering
them that day. “It’s clearly an unscheduled stoppage. Something must have happened to Grim Bones.”

Mr. Benders fumbled with his bag as he placed it on the bench. It thudded on the floor, contents fluttering down just behind.
Some of Grim’s correspondence was scattered into the pile. The old courier bent over and hastily collected the mess, paying
particular attention to one wax-sealed envelope. “I hope it doesn’t have anything to do with this message to Glass-Eyed Pete.”

Oversecretary Underhill turned to Mr. Benders. “Your territory on Earth includes the Boneses, does it not?”

“You’re to start there.” Underhill scribbled off a quick note and handed it to Mr. Benders.

Mr. Bones was reading his copy of the
Eternal Bugle
while Mrs. Bones flounced a feather duster around a cobwebbed trunk. Her duster clattered to the floor as Mr. Benders slammed
open the secrets-closet door.

Mr. Benders hobbled into the closet. “Time stopped and a field agent down is fuss enough, I should say!”

“An F.A.D.!” Mr. and Mrs. Bones repeated in two gasps. The trunk lid clunked noisily as Mrs. Bones sat down.

“Here, Lars.” Mr. Benders handed Mr. Bones a sealed note. “I’m sure you’ll have this sorted out in no time at all.” He tried
to sound calm as he rocked nervously on his creaky old feet.

The Boneses were regional leaders, in charge of emergency response. Mr. Bones doffed his trusty departmental hat. He slipped
on his spectacles, and then, breaking the document’s seal, he scanned the note. “It’s from Oversecretary Underhill.”

Mrs. Bones rushed to her husband’s side to read over his shoulder.

My Dear Lars and Decette:

By now I’m sure that Cecil has informed you that we have a field agent down. And I needn’t tell you that means Grim is in
serious danger. Unfortunately, so is my position and the very future of the D.F.F. There’s no telling how unstable this situation
will become if the council gets word of an unscheduled time stoppage. A power outage caused by Grim and even a whiff of Pete
will play right into Cornelia Chippendale’s hands.

I am truly sorry that at a time I should be offering my deepest condolences I must urge you to action. But as two of my best,
I know you will get this situation under control.

My deepest sympathy and unflagging support,

“Right, Cecil,” Mr. Bones said as calmly as he could manage. “We’ll meet the rest of the secrets keepers at the rendezvous
point.” But his hand bones trembled as he tucked the note into his vest pocket.

Mr. Benders instinctively swept up the outgoing mail. Neither rain nor sleet nor an Afterlife emergency would keep this skeleton
from his appointed rounds. His hand paused when he spotted Billy’s note to Pete sitting atop a nearby pile. “Don’t want that
mixed up with the rest of your mail.”

“Celesdon’s Bells! I’m getting fluff-headed. I meant to get rid of that.”

Mr. Benders tucked the note into his bag. “Don’t work yourself up too much, Lars. Special deliveries are my specialty. I have
to stop later at the Boneyard anyhow.” Turning gingerly, he limped out the door, leaving it open. “Best of luck, old friends.
I’ll be back to help as soon as I can.” He hobbled next through a shimmering portal, and past the curtains that separate this
world from the next. With the proper Afterlife permissions, even a solid old skeleton like Mr. Benders could travel like a
ghost. 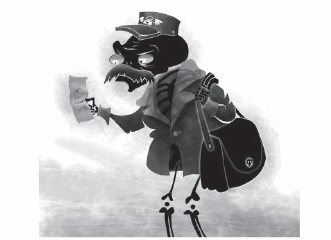 Mr. and Mrs. Bones gathered up a map and a list of fellow closet skeletons. In no time they were crunching across the manor’s
gravel turnabout, between suspended raindrops. It would have been a stiff morning rain, had time not been stopped.

One good thing about dangerous situations—they can really focus your resources. And this one had Mr. Bones’s energy level
soaring like an emergency flair. In all the centuries he’d been dead, he never felt so alive!

In the Shadow of Gloom

If you want to flee Gloom’s shadow

it’s easy as can be.

You need only cast your eyes about

and find a nightmare key.

Shadewick Gloom yanked Millicent through the last of the shadow hallway and stepped into Nevermore. The place was maliciously
dark, made colder by a starless sky.

Gloom led her down a broad set of stone steps, his hounds skulking beside him. Stretching in front of Millicent was a cemetery,
extending into a vast city of twisted tombs. As Gloom hauled her through the narrow streets, she could hear a thin wash of
screams—thousands, perhaps millions of them, drifting in the darkness. Knowing that two of the voices belonged to her parents
made her translucent skin crawl.

How will I find them? The place is so impossibly big.

Shadewick clacked along, talking to his hounds. “You know, boys, I think we need a decorative touch just over there.” He stopped
and nibbled his thumb bone. “A five-story mausoleum would do the trick.”

Millicent recognized the name from the
Eternal Bugle
, the paper Billy’s parents always read. She strained to see the face of the woman who was after Gramps Pete.

A woman wrapped in a black cloak arrived in a waddling trot. “I sent you on a simple errand, Gloom, and you completely botched
it.”

“Now, how can you say that, Cornelia, my dear?” Shadewick Gloom feigned shock. “Grim Bones is out of commission, and I’ve
this little dumpling in my possession, too.” He swung Millicent over his shoulder, dangling her as proof.

Miss Chippendale reminded Millicent of a snake coiling for a strike. “Well, if you’ve done such a dandy job, WHERE’S THE BOY
AND WHY HAS TIME STOPPED?!!”

“I’ve managed to lay the problem on Underhill’s doorstep. Still! How could you let this happen?”

Underhill!
Millicent thought. She had shared enough conversations with Billy to know Underhill was an important official in the Afterlife.
And a good one, too: not like
this
creepy woman. 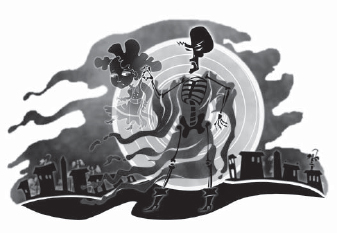 “And as you can plainly see,” Chippendale continued, “the girl’s not quite dead! Until you restart time, there’s a chance
she can get back to her body.”

Thundering waves wouldn’t have struck Millicent with more force.
I’m not dead yet!
This explained why she was still so ghostly in the Afterlife and why it felt like so much of her had been left behind. Her
glow exploded like sunburst.

“Now look what you’ve done, Chippy,” Gloom growled. “You’ve gone and given her hope.” He shook Millicent like a dust rag.

Miss Chippendale stammered, “W-well … for pity’s sake, put that girl in the darkest hole you can find!” Then a cunning smile
crept onto her lips. “Or you might unleash a dread on her first.”

From the way she said it, Millicent was certain she wasn’t talking about a word that described fear, but something that inspired
it.

“After that, GET THE BOY and anyone else that might have witnessed your bungling!” temporary Commissioner Chippendale shouted
as she waddled back toward the shadowport. Then, digging for something inside her cloak, she withdrew a strange object—horse
head on one end, eyeball on the other.

She has her own shadowport key!
Millicent rubbed her forehead.
That means there must be a hallway leading to the Light Side… .
Millicent
had
to do something. The list of people in need of saving, herself included, was growing by the minute!

Wet (The Water's Edge #1) by Stacy Kestwick
The Space In Between by Cherry, Brittainy
The Last Chance Ranch by Wind, Ruth, Samuel, Barbara
More Than Just Hardcore by Terry Funk
Fracture Me by Tahereh Mafi
Dateline: Kydd and Rios by Janzen, Tara
El camino de fuego by Christian Jacq
Stained by Cheryl Rainfield
The Legacy of Lehr by Katherine Kurtz
Miss Darby's Duenna by Sheri Cobb South
Our partner