The Road to Nevermore (11 page)

Nearby, an old voice creaked, “Grim Bones has been kissing? What kind of emergency is that?” Mrs. Wormwood strained to hear
more through her ear horn.

Mr. Bones ignored her. “I would like you to separate into groups of four, and work out to the edge of our jurisdiction. Be
on the lookout for Grim’s blue glow. It’s a stroke of luck we have such a dreary day. It should make spotting him easier.

“Whatever overpowered Grim must be extraordinarily dangerous, so any skeletons under twelve years old should stay here. We’ll
use you as runners to gather reinforcements in case there’s a need.” Mr. Bones scanned the crowd. A sea of ivory faces looked
back at him—some determined, some drained by fear. “Any questions?”

Mrs. Bones cast him a gentle smile as the jawing started up and a bony hand shot up in the crowd.

“Excuse me, Mr. Bones?” The hand belonged to Mrs. Ribtuck. Her knobbly features were reminiscent of a potato.

Her reply —“Liam Slackbones”— left everyone shaking their heads.

Mr. Bones looked in the direction of Stonehamm Cottage, home of Mordecai Cleansington, and sighed. “Well, I guess that’s no
surprise. Probably sleeping on the job.” Liam Slackbones’s lazy reputation was well known. “I’m sorry, everyone. Looks like
we should carry on.”

But before the skeletons could turn again, Mrs. Bones said something that later caused Mr. Bones to thank his blessings he’d
had the good sense to marry her, though at first he was quite annoyed.

“Lars,” she whispered, “don’t you think we should have a look anyway? You never know.”

“I’ll look a fool for changing my mind,” he whispered back.

“Lars …” Her voice was beyond a whisper now. “How foolish will you look if something
did
happen and we’re too late to help?”

Mr. Bunyon seemed amused by what looked to be a good spat brewing. He grinned like a picket fence. Mrs. Bunyon frowned at
him. “I wouldn’t smirk. You’ve been far more mulish.”

With Mr. Bunyon properly shushed, the secrets-closet skeletons set off, each wondering what kind of power could overwhelm
the most formidable skeleton in the Afterlife.

A few blocks from the Boneyard, Ned assumed his official Skeleton Guide duties by collecting his transferees. They were twenty
of the scruffiest ghosts Billy had ever laid eyes on. Billy was not happy to see Martha’s Uncle Mordecai among them, but had
to admit that he was not particularly surprised. Condemned prisoners in hand, the group marched out of Edgeton and crossed
a quarter mile of barren plain. Ned drove the shackled ghosts double-time, so there was plenty of grumbling.

Like: “What’s the rush? Dark Side running low on souls?” and, “I just died—you’d think a fellow could have a few minutes’
peace.”

When they arrived at the checkpoint, the sight greeting them quickly silenced their complaints.

A huge wall marked the Dark Side. It was a thousand feet high and bristling with spikes. Nestled at its base lay a bustling
skeleton cavalry encampment.

“How come bad guys don’t go directly to the Dark Side when they die?” Billy asked. “You’d think that would be a lot simpler
than collecting them all on this side and then sending them over there.” Billy turned to Pete, who was fiddling with his package,
so Roger answered. “The beings in the Realms Above trust us Lightsiders to do a better job of administrating judgment procedures.
It’s something like applying to university.” He closed his eyes. “Let’s see if I can remember all the steps.

“I arrived through the Tunnel of Light. After docking at the Hall of Reception, I was conducted to an immense lecture room,
where a lengthy application form was waiting. That had to be filled out—then there’s the biographical essay, of course. These
were then packed off to the Realms Above. Sadly, no amount of family pull can help you there.” Roger looked back toward the
Edgeton sky. “Then, I had to wait.” He gripped Billy’s sleeve, turning his white knuckles whiter. “It felt like an eternity.”

“Clackers! Were you nervous?” Billy was curious.

“I should guess I was! Felt like I was about to die all over again. But at last I had letter in hand, and when I finally worked
up the nerve to open it up, it sparkled with a golden light. I was in!” Roger clacked his jaw into a bony grin.

The skeleton’s smile was contagious, but melted from Billy’s face when he turned toward the looming wall. Of all its spiky
darkness, it was the gate that surprised him the most. Only the width of a single man, it shot up the towering wall in a ragged
slash.

“Why’s the door so narrow?” he asked Roger.

“I keep forgetting you’re not from around here.” Roger tipped back his top hat. “The gate into the Light Side is much the
same. It has to do with responsibility.”

“Well, it’s a narrow path with high-reaching consequences, good or bad. There’s only enough room for one person to pass through,
no matter how much we would like to blame others for our choices.”

Billy squinted into the shadows atop the wall, feeling as if bats were flying through his missing belly.

A loud wail spilled over the wall. Billy turned to see Uncle Mordecai cringe. He was standing at the front of the line, about
twenty yards away, and so wrapped in his worries he didn’t notice the latest irregularity. But Billy did and couldn’t help
giggling. 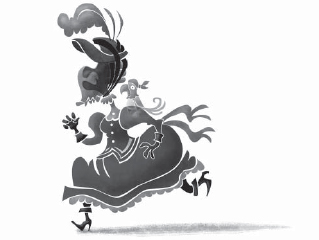 The mystery of what had been in Pete’s parcel was bouncing with a bustle right in front of him. The old pirate had slipped
behind the guardhouse and was now sporting a lavender dress.

Pete muttered, “The things a fella’s got to do to put things right,” as he pulled a veiled hat over his head. It covered his
features in what Roger insisted was a most becoming way.

The disguise didn’t do much to cover Pete’s ship-deck stride, and Billy thought his parrot, Jenkins, was a dead giveaway,
too. So did Ned.

Pete gathered Billy close to his skirts. “Grim made up some documents for me. Has me travelin’ as a skeleton. I’ll tell the
guards yer me grandson and that should get us through. There’s a note attached says I’m to join up with a tour group at the
Hornsley Hotel.” He smiled at Billy from under his veil.

“A tour group?” Billy wondered. “Is there really such a thing?”

“Sure as a parrot’s got pinfeathers.” Pete nodded. Jenkins presented his wing in a sweeping bow.

“Some Lightsiders visit all the time”— Roger slipped into the conversation —“to remind themselves of how good they have it,
but others like to strut around and lord it over the unfortunates.”

Clops and jingles announced the approach of an officer mounted on a skeleton horse. He adjusted his monocle when he saw the
group, but his gaze lingered on Pete. Tipping his helmet, he cooed, “We don’t get many ladies traveling out here. It pleases
me to see such an elegant flower.”

“He really has been out here a long time if
that’s
his idea of a looker,” Roger whispered to Billy.

Pete elbowed Roger in the ribs. Billy bit down hard, trying not to laugh.

“Not at all, madam … charmed.” The officer bowed, his monocle dropping out of his eye socket. “My name is Colonel Siegely,
commander of the Afterlife’s third regiment of the Light Cavalry. Not sure if you’ve been apprised of the situation, but seems
an Afterlife emergency’s been declared—some kind of Hall of Reception foul-up.”

Billy did his best.

“‘An extra-high level of security will be in effect, starting today,’” Colonel Siegely read from an official document he’d
retrieved from a tunic pocket. “‘We will be screening travelers for dangerous items such as shampoo and toothpaste. And you
will also have to remove your shoes.’”

Pete fluttered his fan at the colonel. “Might we have a few words in private on that very point?” He twittered.

The colonel trotted his horse over at once, his bony face plastered with delight. “Certainly, madam.” Siegely grunted as he
dismounted.

“It’s
mademoiselle
to ye. I’m unattached at present.” Pete tapped him with the tip of the folded fan. “Perhaps you could do a kindness to a
lady and her grandson.”

“Grandson, it can’t possibly be! I was certain that you were going to say brother.”

“Again, ye have me blushin’. But ye see, we have a little dilemma.” Pete stationed Billy between the advancing officer and
himself. “Perhaps ye’ll be good enough to help us.”

“Your servant, mademoiselle!” The colonel responded with a bow.

“We need to sneak a few golden wishes in, so we can wish our way out if we don’t like the accommodations. I’m a touch finicky,
ye see.”

“Understandable, but normally out of the question. If a Darksider ended up with a golden wish, he could wish himself over
to the Light Side, too.” The colonel adjusted his monocle, his eyes focusing for the first time. “I do get that request every
so often, but not from skeletons. Never seen one rich enough to manage it.”

The colonel frowned. Billy had to think of something quick. And as luck would have it, he didn’t have to stray very far from
the truth. “Candy!” he blurted.

“Ehhh?” Both Colonel Siegely and Pete turned to Billy.

“How delightful!” Colonel Siegely hitched in his paunchy jacket and puffed out his chest. “Even I like a tidbit now and again.
Perhaps I can overlook the golden wishes for today.” He looked at Pete longingly and took another step forward.

Not good.
Billy winced.
Come on. Think of something!

Colonel Siegely looked down at Billy. “What’s that, young man?”

The colonel locked an admiring glance on the animal. “His name is Clattershanks, and I say he’s the finest in the Afterlife.”

Clattershanks lifted his head and whinnied proudly. But Billy was pretty sure Fleggs could vaporize this horse with one hoof.

Billy asked all about the horse: how many times he’d seen action, what was his favorite saddle, and how fast he could gallop.

The colonel answered. And about twenty minutes later, he gave a cursory look at their documents. Before Colonel Siegely clacked
back to the guardhouse, he left Billy and Pete with a warning. “Keep your coins well hidden. If someone were to find out I
let them pass, well, they’d be leading me in there next—and all for a pretty girl.” He tipped his helmet to Pete. “I’ll count
the days until your safe return.”

Pete curtsied, then he and Billy and all the shackled ghosts headed toward darkness. Seconds later a horn blew notes so deep
they could have been ripped from a thunderstorm’s belly. The gate ratcheted open, and a blast of heat nearly boiled the marrow
in Billy’s bones.