The Road to Nevermore (14 page)

Pete sidled closer to Roger. “Looks like yer with us for the long haul.”

Stroking his hair, the skeleton dandy looked down the long curved hallway, then up at the towering sentinels. His lidded eyes
seemed like calculators figuring the odds of escape. Roger slouched back against the wall. “It’s just the opportunity to develop
an interest in Dark Side architecture.”

“Sorry. Telling them Gloom wanted to see me was the only thing I could think of,” Billy apologized.

“Just as well you did, Billy, otherwise I’d be a top hat taller from the inquisitor’s rack,” Roger said. “Besides, I
did
promise you I’d get you to Gloom’s door.”

Just then, Ned emerged, humming and holding a transfer receipt. He tucked it temporarily under his arm and then set about
his final official duty. He unlocked Uncle Mordecai’s cuffs, setting him free. “Well, that’s that. It’s back to Edgeton for
me.” He tapped his staff to his forehead in a salute, then caught the look of Billy’s disappointment. “Nope, my mind’s made
up, Billy. Skeleton horses couldn’t get me to change it.”

“I’m sure yer mum will be plumb proud ye made it this far,” Pete said as Jenkins tut-tutted from the old pirate’s shoulder.

Ned looked from Pete to Roger to Billy’s misting eyes, then rolled up his document and stuffed it into his red cloak. “I’m
sorry, Billy. I really am, but I can’t risk it. Got to go.”

Ned pushed Mordecai over to Roger. Embarrassment shrouded the Skeleton Guide’s expression as he slumped into the elevator.
The metal floor grate groaned, and fingers of orange light lit him from below like prison bars shutting across his face.

With a deep metallic
THUNK
the elevator shrugged into use. Chain links the size of rib cages rattled through subterranean gears. Squeaks of protesting
metal echoed through the long hallway with the disorder of scattering roaches.

The level of Billy’s worry rose with each clattering link as Ned lowered out of sight. They never would have gotten this far
without the skeleton’s stout staff and alert scouting. And now Ned was leaving right when he and Gramps Pete were facing the
most dangerous part of their journey.

Pete glanced over the edge of the elevator shaft. Scowl dwindling, he turned to Billy and Roger. “It won’t do to fanny around.
We best be going,” he said. “This ain’t a place for cowards.” Then, striding up the hall, he beckoned everyone to follow.

Billy scampered up to join Pete and Roger, glad to be away from the sounds now emanating from the Receiving Department. He
refused to imagine what was happening to the conscripts now that they had been turned over. But the thought didn’t seem to
be eluding Uncle Mordecai. His eyes were round as golden wishes as he trudged along, looking back over his shoulder. The sentinels
spurred their mounts forward. One took up the rear, keeping a missing eye on Billy. The other rode his spider to the head
in order to lead the way.

“Any more ideas for a plan? Or is piratey stealth the best you’ve got?” Roger whispered to Pete.

“Stow it!” Pete growled. Then under his breath muttered, “Weren’t sure we’d even get this far.”

This did not improve Billy’s confidence. Still, Pete and Roger sauntered along—Roger with a skimp of a smile on his face,
like he hadn’t a care in the world. Billy wondered where he found that kind of courage and if he might borrow a spoonful.

Soon the Receiving Department disappeared behind one hallway curve and then another. The longer they trudged, the more convoluted
the hallway became. Billy could see firsthand why it wasn’t wise to wish oneself around on the Dark Side.

Through roundabouts, dark distortions, and in and out of backtracks the sentinel led them, until they arrived at a towering
ebony door. Gloom’s door. As it loomed above Billy, he couldn’t shake the feeling it lead to the very depths of a nightmare—one
that might last forever.

When the skeletons arrived at Stonehamm Cottage, it was still thunderously dark. Mr. Bones gestured for everyone to gather
around. Mrs. Bones, Mrs. Ribtuck, the two Headleys, and four Bunyons formed a tight huddle. Then Mr. Bones said, “Before we
charge in there all willy-nilly, I suggest we do a little investigating. Mr. Headley, will you join me? The rest of you guard
either side of the door. If something’s in there, it might come this way.” Mrs. Bones’s brave look calmed him slightly as
he turned to Headley. “Shall we?”

“We shall,” Mr. Headley replied, and the two skeletons stole around the corner.

The bedroom window lit up with a sudden burst of purple as they drew near. Mr. Bones pressed his back against the cottage
clapboards, then signaled silently for Headley to take up a post on the opposite side. Headley ducked under the sill and got
into position. More glows erupted, followed by screams, and then the skeletons peeked inside.

The glass was filthy with dust, but what Mr. Bones saw was enough to chill him to the marrow. Millicent and a plump woman
stood frozen next to a bed.
What is Millicent doing here? And where is Billy?

Eyes flared with worry, Mr. Bones stepped in front of the window for a better look. The bed contained a wiry old man. In the
center of the room, a shadowy shape slipped between two skeletons, suspended in the purple light of some unearthly magic.
The skeletons were slumped forward, backs to the window.

Mr. Bones recognized Grim’s cloak immediately. He guessed the other skeleton was Liam Slackbones. Mr. Bones scanned the room
for Billy and Fleggs.
Maybe they’ve escaped.
But his flicker of hope vanished as the next purple flash revealed a third skeleton. Shadewick Gloom!

“We don’t want any witnesses, now do we?” Gloom said—voice muffled by glass—as he applied a shimmering arc of purple energy
to Liam Slackbones’s skull. “That ought to boil that pea brain of yours!”

Mr. Bones grabbed the windowsill. It splintered apart in his hands.

“What’s the matter?” Mr. Headley asked in a sharp whisper.

Mr. Bones’s eyes were blank as a cemetery statue’s. He slowly reached for the scar at his temple.

“It’s no time to go wobbly.” Mr. Headley grabbed Mr. Bones’s shoulder and shook. “How are you going to save anyone like that?”

Very slowly, beneath twitching lids, the blue luminance returned to Mr. Bones’s eyes. He steadied himself on the remains of
the sill. “Right.”

“Not advisable,” Mr. Bones groaned. “Not quite yet.”

Mr. Headley stared at Mr. Bones as if his head had turned into a parsnip.

“Don’t think this doesn’t pain me, Headley!”— Mr. Bones turned from the window in disgust —“but perhaps you haven’t noticed
his blasts are weakening: they always do.” He closed his eyes, stroking his scar. “H-he doesn’t have unlimited power.”

“It shouldn’t be long now. Let’s get back to the others.”

Mrs. Bones swept over to her husband as soon as he rounded the corner and she saw the extra paleness of his expression.

“I’m all right, my dear.” Mr. Bones untangled himself from her embrace. He explained what was happening inside the cottage
and finished with, “Let’s give it a minute or so, then we will strike.”

It was the longest minute Mr. Bones had ever withstood in his long Afterlife life. When the explosions from the room finally
turned to fizzles, he signaled the others to follow.

The skeletons snuck craftily into the cottage and surrounded the bedroom door. On Mr. Bones’s shout of “You’ve tortured your
last soul, Gloom!” they stormed in. 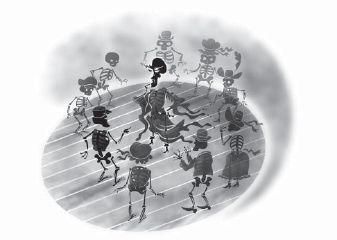 Mr. Bones stepped forward. “Nine to one, Gloom. Best to give up.”

“Lars Bones!” The shadowy skeleton rasped his fingertips together, a jagged grin cutting across his jaw. “Whoever thought
I’d see you again. Your nightmares were quite special. Such a shame I had to release you.”

“We won’t be releasing
you
anytime soon, I can tell you,” Mr. Bones replied, hands trembling as he locked them tight behind his back.

Shadewick Gloom sauntered forward. Mr. Bones inched back nervously. “Nine to one you say? You think that’s enough to hold
back my kind of power? Ludicrous!”

“H-hold together,” Mr. Bones urged the other skeletons. “He’s bluffing. It will take him time to recharge.”

“Look, Dad!” one of the Bunyon boys cried near the bed. “Grim Bones hasn’t got his head!”

The skeletons turned to look. Indeed, Grim’s hood was empty.

When they turned again to face Gloom, the odds had changed. It was now nine to two. Hammer bristled next to his master. The
skeletons instinctively stepped back from the hound.

“Tear ’em up, boy!” Shadewick shouted. Shadowport key in hand, he fled to the nearest wall as the room burst into bone-clattering
mayhem, with skeletons dashing in all directions.

But Mr. Bones threw himself at the nightmarish skeleton. “You’re not going anywhere until you tell me what’s happened to Billy!”

“Billy?” Gloom paused in midstride, then, like two blood-choked ticks, his eyes swelled with realization. “Of course. I should
have remembered.”

Turning his key with one hand, Gloom met Mr. Bones’s charge with the other. The shadow skeleton had just enough power to deliver
one more jolt. It seared Mr. Bones’s temples, sending him to his knees, smoke drifting from his skull. Gloom sneered as he
stepped through the shadowport and disappeared.

It was Mrs. Bunyon who finally restored order to the cottage. An enthusiastic thump to Hammer’s head with her thighbone did
the trick. The shadow hound was still laid out on the floor when Mr. Bones regained consciousness. Mrs. Bones helped her husband
up and led him to Grim. Mr. Bones wobbled along, shaking his head as if trying to clear out cobwebs. The rest of the skeletons
had congregated around Liam Slackbones, doing their best to bring him around.

Mr. Bunyon’s barrel chest was near bursting with pride as he wrapped an arm around his wife, his sons on either side. “Saved
the day, you did. Would ’a been a disaster without your quick wits and your thighbone.”

“Well, it was just the trifle we needed.” Mrs. Bones smiled, then turned to Mr. Bones. In the chaos, she hadn’t heard Gloom
mention Billy’s name. “Do you think you can manage, Lars?” she asked as she let go of his arm.

“Steady, Lars,” Mrs. Bones soothed, although she was clearly as worried as he. “We need to think our way through this.”