The Road to Nevermore (5 page)

“Children!” Martha finally cried out. “You’re crowding me so close, it feels like I got three sets of bums in my bloomers!”

“We’ve been worried about you, Martha,” Millicent confessed. “Your poor uncle. How is he?”

Martha sighed. “Not well. Course it’s hard to feel too sad for him. None of the family can stand him.”

“He can’t be
that
bad.” Billy frowned. He couldn’t imagine anyone related to Martha having even the smallest flaw.

“He’s that bad and worse.” Martha nodded regretfully. “Still, he needs help. It’s a sad day when a whole family turns their
back. I’m afraid, children, that’s what really got me so glum.” Martha sniffed.

Millicent glanced at Billy. “Maybe we can do something?” she suggested.

Martha’s eyes glistened. “I should have known you two dear hearts would lend a hand.”

“We should visit him straightaway, don’t you think?” Billy insisted. “It might help him feel better.”

“I suppose so, lambs.” Martha dabbed her eyes and then tucked her hanky into her sleeve. “But it won’t be pleasant, I can
promise you. Sure you still want to go?”

Dame Biglum was quick to allow this visit, so Billy, Millicent, and Martha threw on their raincoats and went out into the
gathering gloom.

Mr. Colter, the coachman, drew the carriage to the front of the manor. The children clambered up and wedged in next to Martha.
Mr. Colter nodded to his passengers, and when his gaze got round to Martha, he blushed. Martha’s cheeks were red, too—the
brightest things going on this dreary day.

Billy watched the two adults, baffled by their behavior, but Millicent wore a quiet smile.

In a half hour’s time, the carriage drove down into a small valley. Stonehamm was a most appropriate name for the rock-strewn
fields and misshaped cottage.

The children followed Martha as she stepped up the fieldstone stoop. She knocked timidly on the front door, then knocked harder.
When no one responded, she sighed and let them all in.

There was a secrets-closet at Stonehamm Farm cottage, as there is everywhere people call home, tucked into the shadows behind
a wardrobe. Unlike the Boneses’ snug closet, here, trunks were overflowing, their documents scattered everywhere. Among the
mess lay the snoring Liam Slackbones, skeleton master of this rundown outpost.

For the last few days Slackbones had been celebrating the imminent arrival of Grim and the departure of Uncle Mordecai’s soul.
But most of all, he looked forward to a nice holiday without the responsibility of looking after Uncle Mordecai’s lies.

Liam Slackbones slept through the sharp knock at the front door.

The front door complained loudly as Martha and the children stepped inside.

The dark cottage smelled of wood rot. Martha’s nose wrinkled as she lit a runty candle, then lifted it high. The room contained
only a few sticks of rough-hewed furniture. Flies circled the unwashed bowls overturned on the table.

The children held on to Martha’s skirts as they crossed to the bedroom door. The room contained an old wardrobe and bed—both
poorly made, as if the carpenters had thrown their lumber together and fled. A few heart thumps later, they noticed a gnarled
old man in bed. His eyes were closed. He held a dry bean clamped between his finger and thumb.

Martha brought the candle to her uncle’s face and gasped. “Looks like we’re too late, children. Uncle Mordecai has passed
on.” She lowered the candle and her voice.

She stood, head bowed in respect, then reached down with her free hand and drew a grubby gray sheet over the old man’s body.
But as she was about to cover his head, his eyes snapped open. They were yellow as runny yoke.

“Trying to take my last bean!” His voice was gravelly as his barren fields. “I know you are. But I’ll take it to the grave
with me!”

Martha whipped the candle back. Uncle Mordecai’s glare narrowed. “And you want my farm, I’m thinkin’. Well, too late for that.
I’ve locked the deed away. No one gets it,” he finished, chest heaving in a rough coughing fit.

Billy frowned and stepped forward. “That’s a nasty way to talk to our Martha.”

Millicent was right behind him. “You should apologize.”

Martha gasped. The vicious light in Uncle Mordecai’s eyes bore in on Billy. Then he snapped a gnarled hand around the boy’s
neck. Billy’s eyes nearly popped from his head as Uncle Mordecai dragged him toward his flinty shard of a nose. Millicent
screamed and lunged forward, aiming to pry open the old man’s grip.

Billy recoiled with shock. His bones glowed bright beneath his flesh as dark sparks danced around his body.

Uncle Mordecai’s hand dropped. His eyes rolled up. And in that instant—in the tiny gap between a tick and a tock—everything
froze:

Martha’s candle locked in flickerless flame. A shout of warning stuck to her lips.

Millicent hung in the air, caught in the midst of her rush to save Billy.

Anyone who spends time in the Afterlife is sure to see Government Hall spanning high overhead. And those who travel the length
of this great corridor will notice that one end of the building looks much like the other. Light Side or Dark: polished stone
floors lined with offices stretch to forever. But on the Dark Side, the lights are set lower and the heat is set much higher.

Around one particularly dark bend was the office of Shadewick Gloom. His title was Ambassador for the Department of Injustice.
Which meant he was an exceedingly powerful Dark Side muckamuck.

Gloom had not always worked for the Dark Side. Not so long ago, he held high office on the Light Side. Only one other Afterlifer
had ever moved to the Dark Side from the Light—the fellow who runs the place. Both had fallen from grace, but one had fallen
much farther—all the way to the Lower Realms.

Higher beings rule the Afterlife from the Realms Above, but they do give a certain amount of autonomy to the Dark Side. They
put lower beings in charge of Lower Realms, so they don’t have to get their hands too dirty, and there’s none as low as the
big boss himself.

Shadewick’s story was not as well known.

Except by Uncle Grim.

Shadewick Gloom used to escort souls to the Hall of Reception, everyone’s first stop in the Afterlife. For years, Grim had
served as Gloom’s apprentice. But Shadewick truly enjoyed his time as the Grim Reaper, far more than he was supposed to. He
had collected souls before they were due, and hid them for his own dark purposes. Which is why he’d created Nevermore.

How
he created the place was another matter.

Years before Shadewick Gloom had been an exceptional student at Miss Spinetip’s School for Secrets-Keeping Skeletons. Any
skeleton who is anyone studies there. Uncle Grim was one of Miss Spinetip’s stars. But no one could outshine Gloom’s ability
in shadow stretching.

Working with shadows has always been a specialty among skeletons. They discovered a way of opening shadows using skeleton
keys. Then they stretched them to create secrets-closets—a handy way to hide from the living.

Gloom really pushed the envelope when he discovered how to weave shadows together in an endless chain, using nightmares. He
kept that bit of business to himself, though, as he stitched together every shadow in the Afterlife and created Nevermore.

To get back and forth to his private world, he fabricated a spidery network of shadow tunnels. They could take him wherever
he liked, so long as he remembered his key. There were only two of these extraordinary keys in the entire universe.

But Gloom’s breakthrough left him with an unquenchable thirst for nightmares, and since then he hadn’t been shy about collecting
them.

This secret undertaking really took off after Commissioner Pickerel stumbled onto it. Soon, Nevermore became Pickerel’s favorite
dumping ground. It was a convenient way to get rid of misfits while avoiding a complicated court system. Pickerel took great
care to never let on he was working with Gloom—that would have been frowned on, indeed. Even on the Dark Side.

When Grim found out about Nevermore, he raised the alarm. Shortly after, the High Council packed Shadewick off to the Dark
Side. But there he flourished even more. The Council may have stripped him of his position, but they couldn’t take his ability.
And he’d been gaining in strength ever since by mastering dark powers.

In all his splendiferous Dark Side surroundings, Shadewick’s most prized possession was his bell jar collection. The glass
domes contained the heads of his enemies. He displayed them proudly throughout his palace and loved examining them.

That’s what Shadewick was doing when Hammer and Tongs rounded past him and then bounded down the hall. The shadow hounds were
the size of Great Danes and black as dark intentions—the same shade as the robes shrouding Shadewick Gloom.

“Curious,” he murmured, following after them, his murky cloak wafting behind.

Just then, he heard Miss Chippendale shouting. “Ohhhh, you great lummoxes. Get off!”

Shadewick entered the laboratory he affectionately called his “darkroom.” Miss Chippendale lay sprawled on the floor as the
two beasts licked her with slobbering tongues. Despite her high rank, Miss Chippendale couldn’t wish herself into the Dark
Side. Even if she had been able to, she didn’t fancy leaving a financial paper trail by spending a golden wish. Gloom’s web
of shadowports was a cheaper way to travel, and a safer way of getting around the convoluted terrain of the Dark Side. 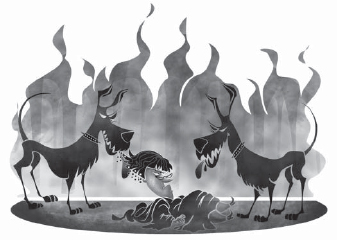 “Off!” Gloom snapped. The hounds backed away, tails drooping as they cowered behind their master. He helped the temporary
commissioner onto her feet. “Cornelia Chippendale. This is a surprise. To what do I owe the pleasure?”

She hastily rearranged her cloak. “A favor among professionals, Mr. Ambassador.”

“Why so formal?” He glanced sideways at the twirling shadowport from which she had emerged and then back at his roundish guest.
“You obviously feel comfortable enough to let yourself in. I gather you found Pickerel’s key amongst his private papers. Were
you snooping?”

JO03 - Detour to Murder by Jeff Sherratt
No Trouble for the Cactus Kid by L'amour, Louis
Lily of the Valley by Sarah Daltry
Colters' Gift by Maya Banks
The History of Florida by Michael Gannon
Barbara Graham - Quilted 05 - Murder by Sunlight by Barbara Graham
Ashley's Wedding by Giulia Napoli
Waking Dream [Tales of the Citadel 23] by Viola Grace
Deception (Mafia Ties #1) by Fiona Davenport
The Debonair Duke by Emilyn Hendrickson
Our partner