The Road to Nevermore (7 page)

Regretfully for skeleton historians, the Battle at Stonehamm Cottage lasted only seconds. Billy was pinned to the ground near
Uncle Mordecai’s bed when Shadewick Gloom and his snarling hounds sprang from their shadowport. From there, all Billy could
see were two crackling bolts of purple light. The cottage shook with a thunderous explosion, then went quiet.

The dogs obeyed instantly and Billy got his first clear look at the shadow-cloaked skeleton. There was something in his hands:
Uncle Grim’s head!
Billy jumped to his feet. His eyes swept the room in a panic. Grim’s headless body lay still, on the far side of the room.

As Fleggs reared up and whinnied, relief surged though Billy. The huge warhorse would surely set things straight. Fleggs pawed
and snorted as he edged toward Shadewick, his eyes the color of spitting lava.

“Get him, Fleggs!” Billy cried.

Gloom held up Uncle Grim’s head. “I’ll smash it if you plant one hoof closer,” he shouted. 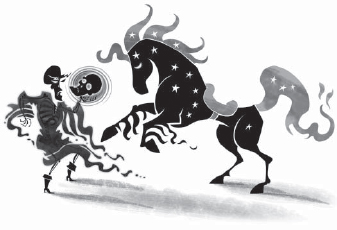 Billy couldn’t believe it. Could this dark skeleton win so easily?

Gloom lifted the skull. “Ah, poor Grim Bones.” He snickered, then tucked the skull into the crook of his arm. He turned on
Billy. “I expected some trickiness, but this is most unusual.” He circled the boy slowly. “How is it that a human boy is still
moving even though time has stopped? Hmmm. We’ll have plenty of time to sort it out it because you’re coming with me! But,
first …” Shadewick strode toward Millicent.

“Noooo!” Billy swiped at his friend’s arm, but the hounds pressed him back.

That voice.
And this shrouded skeleton, they were straight out of his nightmares.

Shadewick Gloom smirked. He waved a hand toward Millicent’s chest and out leaped a bright purple orb. A chill crept through
Billy, frosting him to the bones.

He didn’t notice Grim’s eyes light up. But Billy did. Uncle Grim was coming around!

Shadewick slunk toward Billy as the hounds took up a new post in front of Fleggs. “And now for you.” He flexed his fingers
like he was trying to choose melons in a grocer’s bin. “Another ripe soul for Nevermore.”

Billy leaped back, tripping over the bed.

The touch burned and the room whirled. Out of the dimness, he heard Grim shout, “Pull, Billy! You’ve done it before!”

Blue glows and black sparks flared around Billy. In a flash, he was more bones than body. Eternal energy twisted out of his
chest and up his arms. Shadewick reached for the bright blue ball of Billy’s soul. But the boy reached out and pulled back.

By then, Grim’s headless body was back on its feet. It took a menacing step forward. Fleggs rumbled back into the fray. Hammer
and Tongs lunged at the horse’s flanks, but the huge beast was too powerful.

Shadewick Gloom saw which way the tide of battle was turning. He retreated, uttering a string of the Dark Side’s least delicate
curses. With Millicent’s soul and Grim’s head in hand, he stepped back into his shadowport. Hammer shot through next, the
victim of Fleggs’s powerful fetlock. And a yelping Tongs swiftly followed.

Billy lunged after them, but it was too late. The shadowport was nearly closed. Billy caught Grim’s last shout —“The Boneyard!”—
before the hole twisted shut.

In the dim light of Stonehamm Cottage, Billy was left with Martha, still as a headstone; Grim’s headless body fumbling around
on the floor; and his best friend’s soulless body, frozen in time, reaching out to save him.

The last time Millicent felt like this, she had been a passenger in Professor Dabbleton’s rocket-powered dirigible. Too much
kick in his thrusters and she had found herself a thousand feet in the air, swearing her stomach was a thousand feet below.

A horrid skeleton was leading her through a spiraling hall.
Am I dead?
she wondered. But her stomach felt too topsy-turvy to believe that. It was a most unusual sensation, like she wasn’t altogether
there.

A purple glow scuffed the edges of the walls. It took Millicent a moment to realize the light was coming from her. She looked
down at her arms and legs. They were as ghostly as Glass-Eyed Pete! Then she saw something worse. The skeleton in front of
her was carrying Uncle Grim’s head. Grim was scowling.

And as if all this wasn’t enough, two shadowy hounds loped ahead—each leaving a wake of sludge.

It was all most curious.

Eventually, they stepped into a cavernous room, filled with lenses, crystal globes, prisms, surveying instruments, and even
several orreries.
It’s some kind of laboratory,
Millicent thought. But for what kind of strange science?

The skeleton slammed Uncle Grim’s head next to a lens the size of a globe. He turned to one of his hounds. “Take her into
the next room, Tongs. But don’t let her drift away. Hammer, you wait by the shadowport.”

Both dogs obeyed. Tongs gripped Millicent by her dress and trotted her into the hallway. She floated behind with as much ability
to resist as a balloon. From its scowl, Millicent guessed the dog wasn’t fond of light.

Tongs released her, then flopped next to the door. She drifted toward the center of the room and circled slowly. Many children
would have died of fright by now, but not Millicent. She lived for these kinds of mysteries. She was scared, of course. But
with measured steps and trembling breaths, she regrouped and looked around. 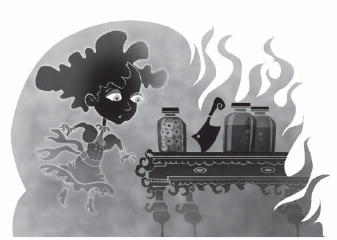 She was in a kitchen. Thick wooden islands were chockablock with ingredients in large glass jars. Bits and pieces of body
parts wriggled inside each one. A handful of eyeballs blinked at her. Millicent shuddered.

When she tried to take a step away, she sank partway through the floor, then sprang into the air again. After numerous attempts,
one thing was certain. Running away was out of the question.

Millicent drifted as close as she dared to the door, until the hound growled a low warning. She could hear snips of the conversation
in the next room. The shadow skeleton’s voice carried particularly well.

“Now, now, Grim. My dear ex-assistant. Don’t be such a sourpuss. You are to be the crown jewel of my collection. The least
you could do is show off that big skeleton smile.”

Who is that beastly skeleton?
Millicent wondered.

Ah!
Millicent tucked the name away.

“Not much chance of that, old thing. You see, I’m on the best of terms with the One below. Besides, no one will hear you when
I put this jar over your head.” Millicent heard the ring of a glass bell. Shadewick must have tinged the glass with a fingertip.
The shadow skeleton continued. “It’s quite soundproof. You won’t be able to call your nasty horse.”

All Millicent could hear from Uncle Grim after that were muffled curses. She turned toward the farthest wall, but this whole
walking business was like trying to get around on a lake bottom.

Millicent heard Shadewick chuckle right behind her. She turned to see him pull a key from a shadowy sleeve. It had a scrollwork
horse head for a handle and the shaft ended in a large crystal eyeball, filled with radiant black energy.

Shadewick studied Millicent’s face. “You have a most familiar look.” He stroked the key with sharp fingertips. The sound raised
her neck hairs. “Ah, yes … I know who you are. I shall station you next to your parents. That should be lovely, I’m sure.”

Slowly, with a few prods from Fleggs, Billy sat up. He still felt horrid as hag’s breath, but had to do something. Millicent
would have. “Get your teacup out of its saucer and get busy!” he could imagine her saying.

As Billy dragged himself up, Grim’s headless body bumped into him. It was holding a creased sheet of paper in one hand and
swirling the other in a gesture of writing.

He wants a pen!

Billy grabbed the candle from Martha’s hand, the flame still frozen in mid-flicker. He searched the cottage, lighting up every
dank corner until finally stumbling across a crumpled grocery list and a pen.

He darted back to the bedroom, then, steering Grim’s body to the bed, he placed the writing instrument in its hands. It took
a number of scribbling strokes before the body figured out how to produce something legible. Billy read the offered note,
his knees shakier than the handwriting. 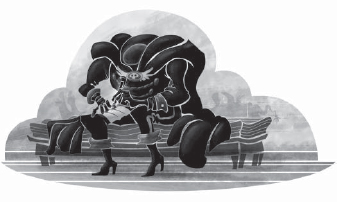 Billy, not sure how long I can keep time stopped … still possible to save Millicent. Ride Fleggs to the Afterlife! If time
restarts, Millicent will be lost forever in Shadewick Gloom’s hideaway, Nevermore!

Go to the Boneyard. Get help. Can’t write more.

Grim’s pen clattered to the floor. His body twitched and bent over—hands contorted like claws, arms crossed and shaking.

Billy felt horrible leaving Grim, but staying couldn’t help his uncle and would only put Millicent into more danger. He jammed
the note in his raincoat pocket, and then, scraping a chair alongside Fleggs, he clambered aboard.

Concealed in Death by J. D. Robb
Second Chances by Chris Hechtl
When It Happens by Susane Colasanti
Deadly Gift by Heather Graham
Great Tales from English History, Book 2 by Robert Lacey
Shattered Innocence by Noelle, Alexis
The Boy No One Loved by Casey Watson
Callahan's Secret by Spider Robinson
Tempestuous by Kim Askew
Absolution by Michael Kerr
Our partner