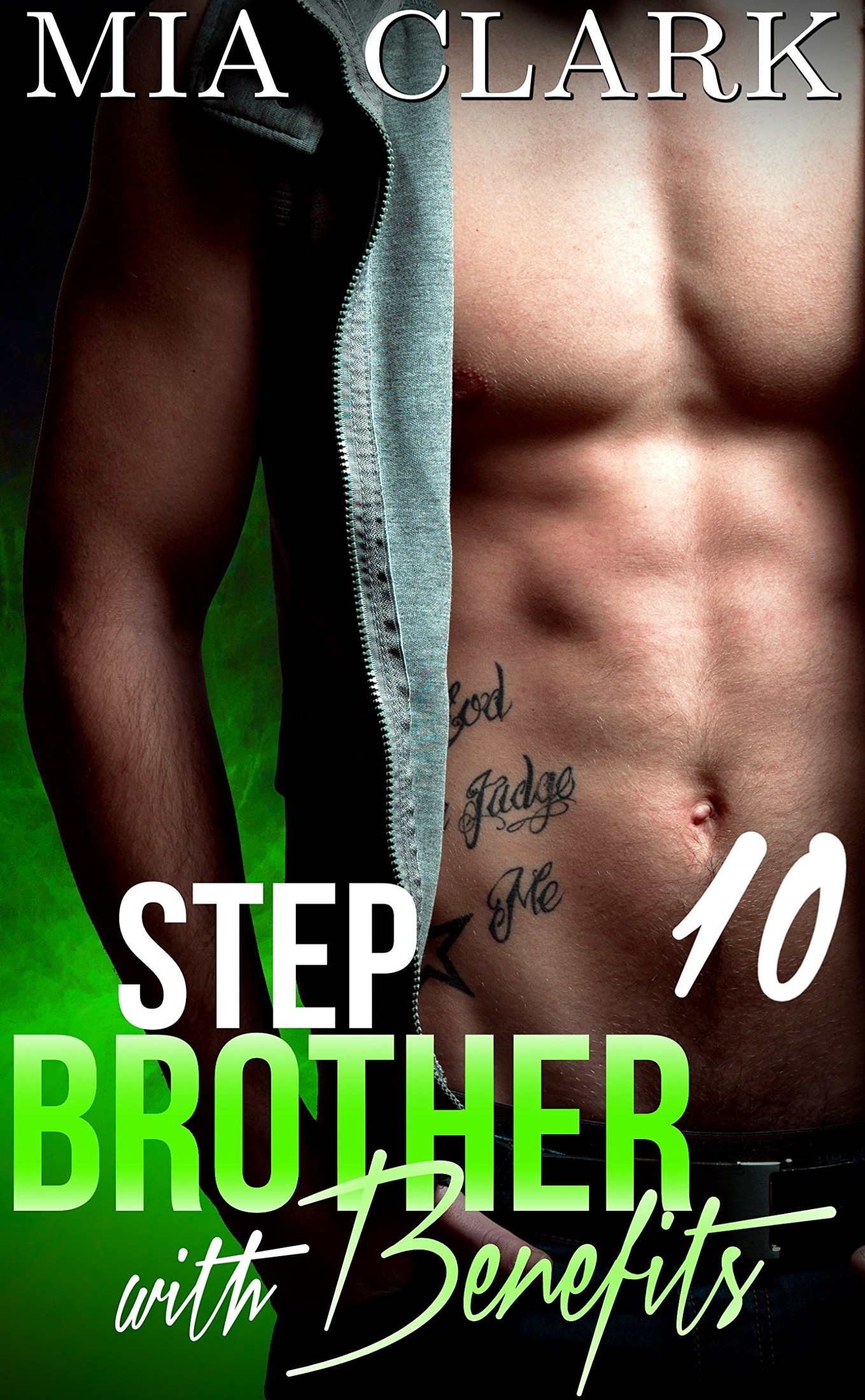 A Note from Mia

C
heck here for all of the currently available Stepbrother With Benefits Season Two books on Amazon:

Make sure you don't miss any of my new releases by signing up for my VIP readers list!

You can also find me on Facebook for more sneak peeks and updates here:

Ethan said that phones don't work out here very well and they don't get much signal, but I could at least use it to check the time because I'd sort of like to seduce my stepbrother.  He's sleeping, though, so this is going to be difficult.

Is it
actually
difficult?  I've done this before, but not the same way as how I'd like to do it now.  We've slept together basically every night for the past week.  Um... actual sleeping, I mean.  We've uh... we've
slept
together quite a bit more than just every night, but that's something else entirely.

He's still asleep, so I think maybe it's early?  Early is good.  It's bright out, though, so it can't be too early.  If I'd been awake to see the sun rise, this would all be much easier, but I wasn't.  I don't hear our parents moving around or talking outside, so they must be asleep, too.

I'm still wearing the lingerie I wore last night for Ethan, but he's basically naked.  He really should have put his pajama pants on before falling asleep.  What if his dad catches him like this?  Now I'm just being paranoid for no reason.  Why would his dad catch him?  It probably won't happen, and also I can just cover him up if I need to so that no one can tell he's naked.

That's the main problem here.  Ethan
is
naked, and he's also asleep, and just like most every other morning, he's got an erection.  He's on his back right next to me and I couldn't see his cock at first but I wanted to, so I lifted away the top of his sleeping back, and...

Yes, Ethan has an erection.  His cock is pointing straight up, and it grew a little harder, twitching and throbbing as soon as I released it into the open air.

This is a bad idea.  Why am I thinking about doing it then?  Except maybe it's not a bad idea?  No, it's definitely a bad idea.  Calm down, Ashley.  You don't have to do this.

No.  I
need
to.  I need to do this.  I don't know why I need to do it, but somehow, somewhere in my mind, I have convinced myself it needs to be done.  It's extra important, now or never.

How can I argue against that?

Is this what Ethan goes through when he's considering his bad boy things?  Because what I'm about to do is completely not a good girl thing.  It's a really really bad girl thing to do, actually.

I reach out and touch the tip of Ethan's cock with my fingers, gently feeling it.  His cock bounces and throbs from the sensation of my light touch.  There's a drop of precum on the head of his cock and I carefully tease it with the tip of my finger, then slide it around until his entire cockhead is glistening with his arousal.

Quiet and careful, I scoot close, getting on my knees.  I turn and twist around, then stand up slightly and put one leg on the other side of Ethan's body.  I'm above him now, sort of just hovering there.  I bend my knees and lower myself a little, a little more, more and more.  I'm close now, directly over him, and the only thing stopping me from lowering myself entirely onto his cock is the fact that I'm still wearing panties.

Should I do this?  I can stop.  I can lay back down and pretend none of this ever happened and that I wasn't trying to seduce Ethan in his sleep, but... no.  I can't.  I can't just stop now.  It's impossible.

I pull my panties aside and look down, making sure I'm lined up right.  I lower myself a little until I can feel the head of Ethan's slumbering erection pressing against my feminine folds.  As soon as I'm sure that I can push myself completely down without stopping, I do exactly that.

I'm wet and aroused and very ready for this, so it isn't exactly hard to do, but it takes a second for everything to fully sink into place, both mentally and physically.  Then it's done, though.  Ethan is inside of me.  I press my hands down against his bare chest and squeeze tight against him, feeling his cock pulse and throb deep within me.

Ethan is sleeping, or he was sleeping, but he's very much awake now.  His hips buck up, bouncing against me.  I almost fall off of him from the power of his sharp thrust, but I steady and balance myself with my hands on his chest.  His upper body jerks up, too, and his eyes shoot open.  He looks confused at first, but not for long.

"Oh,
fuck
," he says, practically growling at me.  His hands grab my hips and hold me down, pulling me onto his cock.  "Good morning to you, too, Princess."

"No fucking way am I going to miss out on enjoying your tight little body," he says.  "We had some fun last night, but now that I've had a chance to rest up... yeah... hope you aren't too tired, Princess."

I bite my bottom lip and grin at him, which I guess he takes as a challenge.  He wraps his arms around me, pulling me close, and he bites my lip, stealing it from me and claiming it as his own.  Before I can protest or kiss him, he lifts his hips up and presses his cock as deep into me as he can.  I let out a lusty gasp, unable to stop myself.

Ethan apparently doesn't care about any of this, because he pulls out of me slightly, then bucks his hips up, pushing hard into me once more.  Our bodies clap together, the sound of soft and hard smacks echoing through our tent and the woods around us.  Yes, um... just like that... smack, smack, smack
smacksmack...

If he wasn't holding me close to him, I think I would have fallen off by now.  Being atop Ethan is kind of like riding one of those electric bulls, except I think this is even worse because it's not only hard to stay on, it's hard  to concentrate, which makes it even harder to stay on.  I whimper and gasp and grab onto the back of his head and his hair, pulling at it.  This only seems to goad him on further.

If we were back home, it'd be fun, except we aren't back home, and our parents are very close by, so...

I can't really hear much except the sound of my stepbrother's body smacking against my own, except then I hear the sound of a zipper unzipping, too.  It's the tent.  Not our tent, thankfully, but a tent nonetheless.  Ethan hears it, too, and he slows down, the sound of our bodies smacking together getting quieter, barely audible now.

He doesn't stop, though.  Oh no, of course not.  I started this with my attempt at being a naughty girl, and Ethan's definitely going to finish it because he's nothing but a bad boy.  Except, um...

"Ethan?  Ashley?"  It's my stepfather.  He's not right outside the tent, but he's pretty close.  "Are you two awake?"

Let's just see how often my dad can cockblock me, why don't we?  I feel like this is the most recent in a long string of unknowing attempts at cockblocking me, but it's also the one that's most frustrating.  Possibly because I'm ball's deep in Ashley's perfect fucking pussy at the moment and usually when he cockblocks me it's before we even got started.

Yesterday, though?  Yeah, going to count that.  Trying to say that I should leave Ashley alone so she can see how things play out with the campground owner's son?  Fuck that, and fuck you, Dad.

I mean that in a nice way.  I still like my dad, even if he's got a reputation for cockblocking me.  I mean, I sort of still like him, but a lot of things are pissing me off lately.

I should really just figure out a way to tell him.  Why not now?  I could do it fast.  Just shout out to him, say something about how I'm busy having sex with my stepsister at the moment and could he please back the fuck up?

Yeah, it's kind of rude, and also it's my fault for getting into this situation right now.  I guess it's actually Ashley's fault, but I doubt I can blame her.  Fuck... you know how amazing it was waking up to the warm, wet feeling of her pussy wrapped around my shaft? Surprising as fuck, and I was confused at first, but still amazing.

Little Miss Perfect may not realize it, but apparently she's really good at what she does.  When she puts her mind to something, she goes all out.  I admire that about her.  I guess it's easy to admire her when her mind is focused on figuring out creative new ways to have sex with me, though.  How can anyone even complain about something like that?  I'm not complaining, that's for sure.

Not about that, anyways.

I want to tell him about us, but I feel like that's probably the worst way to do it.  I don't know for sure, but I just have a feeling, you know?

"What's up?" I say to my dad, while begrudgingly lifting Ashley up and sliding my cock out of her.

She pouts at me a little, and I briefly contemplating slamming back into her hard to wipe that bratty little pout right off her face, but nah.  This isn't the time for that.  I wish it was, but it's not.

She pouts at me even more.  I don't know why you're pouting at me, Princess.  This is your own damn fault.

"Hi," she says, soft and cute and a little shy.  Yeah, not sure about that one.  This girl acts shy sometimes, but I don't know if I believe it.

"You two want to come out and help me with breakfast?" my dad asks.  "Your mother's going to get up soon, too, Ashley.  She was grumbling at me when I told her it was time to wake up, but I think the smell of bacon can convince her."

Fuck.  Bacon?  Yeah, my dad doesn't play fair.  Also, I kind of want some bacon.  I kind of want to finish what I was doing before he rudely interrupted me, but bacon sounds amazing, too.

"Sure," Ashley says, a smile on her face.  Then she looks over at me and frowns.  She reaches out with one hand and pats my cock like she's apologizing to it.

And that's it.  We're sort of alone again, except my dad is right outside the tent.  I can hear him opening the back of the car and then he's digging through the cooler of food we brought and rummaging through other stuff, finding all of our morning breakfast supplies.