Just as Aunt Violet was grouching and gasping, a beaten-up tow truck with faded letters on the side pulled off the road ahead of them. A man of sizable proportions slid down from the driver’s seat.

He doffed his pork-pie hat towards Lady Clarissa and Uncle Digby. ‘Looks like you could do with a hand.’

Lady Clarissa beamed at him. ‘Oh, your timing couldn’t be better.’

‘It’s the fan belt,’ said Digby, as he held up the rubbery remains. ‘And the old girl’s overheated too.’

The man nodded. ‘Don’t think I have one your size in the truck.’

‘We’re going to Endersley-on-Sea,’ Lady Clarissa explained. ‘We could almost walk from here.’

Aunt Violet opened the passenger door and stalked around to the front of the car. ‘Well, you could but I’m certainly not!’

The man doffed his hat towards Aunt Violet. ‘I can give you a tow, but you’ll all have to squash in with me, I’m afraid,’ he explained.

Violet Appleby looked at the truck and shuddered. ‘I’m not going in that thing.’

‘I can send the taxi back for you if you’d prefer.’ The man grinned. ‘But I know Old Parky’s been a bit busy so it might take a while for him to get here. He’s the only one in the village.’

Clementine hopped out of the car too.

‘Hello there, young lady,’ the man said and smiled at her.

‘Hello. Are you going to fix our car?’ she asked.

‘I will when we get it to my workshop. Is anyone else in there?’ He already thought there was a surprising number of passengers for such a small vehicle.

‘She’s my teacup pig. She’s not very big at all.’ Clementine ran to the back door of the car and retrieved her pet. ‘Here she is.’

Lenny tickled the little creature and said, ‘Well, it’s going to be a tight squeeze, but I’m sure we can all fit in.’

Clementine was almost bursting at the thought of riding in the front of a tow truck.

‘Wait until I tell Angus that we got to go in a proper truck,’ she said, dancing about.

‘If we’d driven a proper car, we wouldn’t be going anywhere near that thing you’re calling a truck,’ Aunt Violet muttered.

Lady Clarissa ignored her. ‘Thank you very much, Mr . . .?’ She hesitated, waiting for the man to introduce himself.

Within a couple of minutes, the little Morris Minor was hooked up to the back of the truck and the family was jammed in along the bench seat. Clementine sat on her mother’s lap nursing Lavender, with Aunt Violet beside her next to Mr Phipps. Uncle Digby was squeezed in by the passenger door. With some fiddling about, everyone was strapped in, and soon they were on their way. 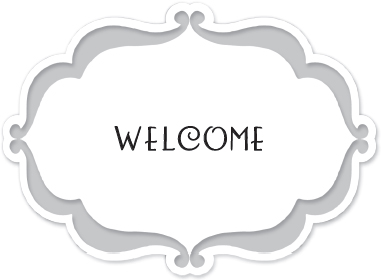 It wasn’t long before Mr Phipps pulled up outside a pretty whitewashed townhouse in the middle of the village. It was right opposite the harbour, three storeys high with wide bay windows. Out the front was a small garden with neatly clipped hedges and a colourful bed of petunias.

‘Is that where we’re staying?’ Clementine asked. She tried to sound out the name on the front gate. ‘En-der-sley-on-Sea Guesthouse.’

Clarissa nodded. ‘This is it.’

Digby studied the building. ‘I have a feeling I might have stayed here when I was a boy.’

‘I hope they’ve updated things since then,’ said Aunt Violet, ‘or we might as well have stayed at home and dodged the builders.’

‘I’ll help you with your things,’ Mr Phipps offered as he hopped out and walked around to Digby’s little car.

Digby poked his head back inside the cabin. ‘Clarissa, dear, why don’t you take everyone inside and I’ll sort the rest.’

Clementine picked up Lavender and held her tight. The tiny pig was wearing her sparkly red collar and lead.

Her mother looked at her. ‘Already?’

‘Yes, because I don’t think there are many guesthouses where you can bring pigs.’

Clementine was right about that. Lady Clarissa had called more than a dozen guesthouses and hotels along the coast before she had found this one. The owner, Mrs Dent, said she was happy to have four-legged guests as long as they behaved themselves and were house-trained. Clarissa had mentioned that Lavender was a teacup pig, expecting the woman to change her mind. But Mrs Dent had been delighted by the idea.

The ladies and Clementine made their way through the front gate as Lenny Phipps waved goodbye to them.

Clementine followed her mother into the front hall. There was a small reception desk with a bell, which Clarissa let Clementine ring.

A voice tinkled from down the hallway. ‘Hello, hello?’

A woman appeared. She was short and round, with a tummy that looked as soft as a pillow. She reminded Clementine of Mrs Mogg. 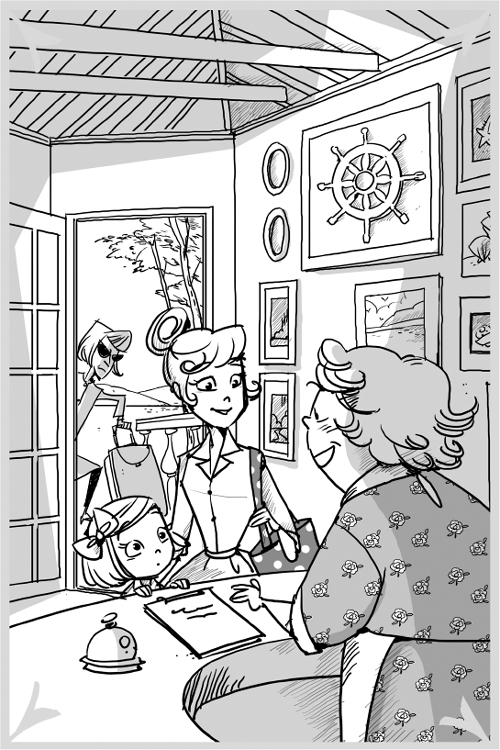 ‘Hello,’ said Lady Clarissa. ‘You must be Mrs Dent.’

‘I am indeed, dear. Rosamund Dent at your service. And you must be Clarissa Appleby.’

Clementine liked Mrs Dent’s rosy cheeks and the way her eyes sparkled when she spoke.

‘Oh my goodness, is that little Lavender?’ She rushed towards Clementine, who was nursing the animal, and leaned down to nuzzle her face against the tiny pig.

Clementine smiled. ‘She likes you.’

‘This is my daughter, Clementine, and my aunt, Violet Appleby,’ Lady Clarissa explained.

‘Hello,’ said Clementine. ‘Uncle Digby is outside with Mr Phipps. Our car broke down so we had to get it towed.’

‘Oh, dear me, what a dreadful way to start a holiday,’ said the old woman.

‘Yes, you can’t imagine –’ Aunt Violet began to grizzle. She was all set to continue when Mrs Dent stopped her in her tracks.

‘How about I show you to your rooms and then I’ll pop the kettle on. And I hope you like strawberry sponge cake.’

‘Do you have a full house at the moment?’ Lady Clarissa asked as the woman walked around the reception desk.

‘No, dear, there’s just your group, and my grandchildren, who are visiting. Their parents have gone away for a couple of weeks, so they’re all mine. You picked a good time to come – things will get much busier towards the end of the month.’

Clementine’s eyes lit up. ‘How old are your grandchildren?’

‘Freddy is almost eight and his sister Della is ten,’ Mrs Dent replied. ‘And I’m sure they will love having an extra playmate for the holidays. I’m a bit boring, you see. I’m good with making cakes and reading stories but when it comes to the beach, I’m not much fun at all.’

‘Like Aunt Violet,’ Clementine replied. ‘She’s good at stories too, but I don’t think she’ll take me swimming.’

Violet peered down at the child. ‘Says who?’

‘Well, you said that you don’t like sand, and the beach is covered in it,’ Clementine explained.

Aunt Violet raised her eyebrows. ‘We’ll see about that.’

Mrs Dent picked up three keys on large wooden key rings and handed them to Lady Clarissa. ‘Mr Pertwhistle and Miss Appleby have their own rooms and there’s another for you and Clementine.’

‘I’ve put you all together on the first floor.’

Clementine looked around her. The house was freshly painted, with pretty blue wallpaper and lots of white furniture, but she didn’t think it was as lovely as her own home – even with the drips and peeling paint. There were no portraits, either. Clementine thought about the pictures of her long-departed grandparents on the walls in the grand entry at Penberthy House. She hoped they wouldn’t be too lonely without her chatting to them and practising her poems.

‘Come along, then. I’ll take you upstairs,’ said Mrs Dent.

‘Where are your grandchildren?’ Clementine asked as they trooped down the hall.

‘They’ll be back soon. I sent them to the shop to pick up some more vegetables for dinner.’

Lavender grunted loudly at this.

‘Yes, I’m sure you like vegetables too, little one,’ Mrs Dent said with a laugh. 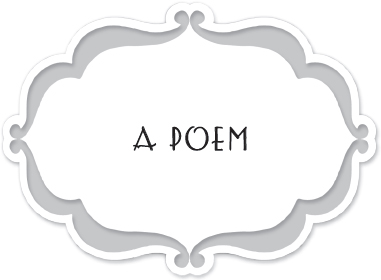 In no time flat, Uncle Digby had delivered the suitcases to the rooms and everyone had unpacked, ready to start their holiday. Mr Phipps towed Uncle Digby’s car to his workshop. It wasn’t a bother, as they weren’t planning to use the car at all. They wouldn’t need to, because the guesthouse was right in the middle of the village, with the beach just across the road.

‘Mrs Dent, you really didn’t have to go to all this trouble,’ Clarissa protested when she saw the room. ‘We’d have been just as happy in the kitchen.’

‘Oh, my dear, I couldn’t do that to you on your first afternoon. But I might from now on, if you really don’t mind. I’ve got a beautiful old table in there – perhaps we can have breakfast and lunch in the kitchen and I’ll use the dining room in the evenings,’ the old woman suggested.

‘Well, I know that Clementine and Uncle Digby and I would be very happy with that, and Aunt Violet will just have to get used to it,’ said Lady Clarissa firmly.

Aunt Violet appeared in the doorway. ‘What will I have to get used to?’ She’d changed out of the navy pants-suit she’d worn for travelling and was now in a smart pair of cream trousers with a red silk blouse and matching ballet flats. Clementine thought that she looked very stylish, although perhaps a bit overdressed for a beach holiday.

‘I was just saying that Mrs Dent didn’t have to go to all this trouble for us. We’d be happy taking tea in the kitchen,’ Clarissa said.

Clarissa was surprised to hear it. So was Clementine, who asked if her great-aunt was feeling all right.

‘Well, at home you’re always grouching that the guests get to use the dining room and we have to stay in the kitchen,’ Clementine explained.

‘Just as long as I don’t have to do any work for the next week, I don’t mind where Mrs Dent feeds us,’ Aunt Violet said.

Clementine stared at her, puzzled. ‘But you don’t do any work at home.’

‘I beg your pardon, young lady,’ the old woman snapped. ‘I’ll have you know I’m a very busy person.’

Aunt Violet spun around and narrowed her eyes. ‘I heard that, Pertwhistle.’

‘Why don’t you all come and have a drink and something to eat?’ said Mrs Dent. She winked at Clementine. She could see that her guests were going to keep her entertained.

Digby Pertwhistle helped seat the ladies, as he was used to doing at home. He glanced up at Mrs Dent, and his forehead creased. ‘I can’t help thinking I’ve met you before, Mrs Dent.’

Sweet Reunion by Melanie Shawn
Dragonriders of Pern 6 - Dragondrums by Anne McCaffrey
Kolyma Tales by Shalanov, Varlan
Resurrecting Her Dragon (Dragon Guard Series Book 13) by Julia Mills
The Glass Man by Jocelyn Adams
The Time Rip by Alexia James
The Footprints of God by Greg Iles
Indigo Squad by Tim C. Taylor
The Shadow of the Progenitors: A Transforms Novel (The Cause Book 1) by Randall Farmer
My Heart for Yours by Perry, Jolene, Campbell, Stephanie
Our partner