She looked up. ‘You know, I’ve been thinking the same thing. You look familiar but I don’t recognise your name.’

The woman shook her head. ‘No, my late husband and I bought it as a family home – from my aunt and uncle, actually. They used to come here for holidays. When Hector passed away a few years ago, I turned it into a guesthouse. I couldn’t stand rattling around here on my own.’

Digby frowned. There was a memory scratching inside his head.

‘So much for that mind like a steel trap, eh, Pertwhistle?’ Aunt Violet teased. ‘More like a sieve, don’t you think?’

Digby grinned. ‘Well, as Clementine pointed out earlier, neither of us are spring chickens any more.’

Just as Mrs Dent finished pouring the tea and Lady Clarissa served the cake, the front door banged and there was the sound of feet running down the hallway.

‘I think the children are back,’ said Mrs Dent. She went to intercept them.

‘What have you done with Lavender?’ Uncle Digby asked.

‘She’s having a sleep in her basket,’ Clementine said. ‘She was ’sausted.’

Clementine took a bite of her sponge cake and picked up the glass of lemonade Mrs Dent had poured for her.

‘This is almost as good as Uncle Pierre’s cake,’ said Clemmie, while munching happily.

Mrs Dent appeared in the doorway with two children. ‘I’d like you to meet my granddaughter, Della, and my grandson, Freddy.’

The girl was tall and thin with light-brown hair pulled into a ponytail. She had piercing green eyes and wore green shorts and a pink t-shirt with a glittery heart in the centre. The boy was blond-haired and blue-eyed and, on first glance, looked more like Clementine than his sister.

There was a chorus of hellos from the adults.

‘You said she was older,’ Della whispered to her grandmother. ‘She’s just a baby.’

Clementine looked at the girl. She wore nice clothes but her face seemed the complete opposite of her grandmother’s. There was no sparkling and twinkling. Della looked as if she had swallowed something nasty.

‘Hello,’ Della said with a pout. 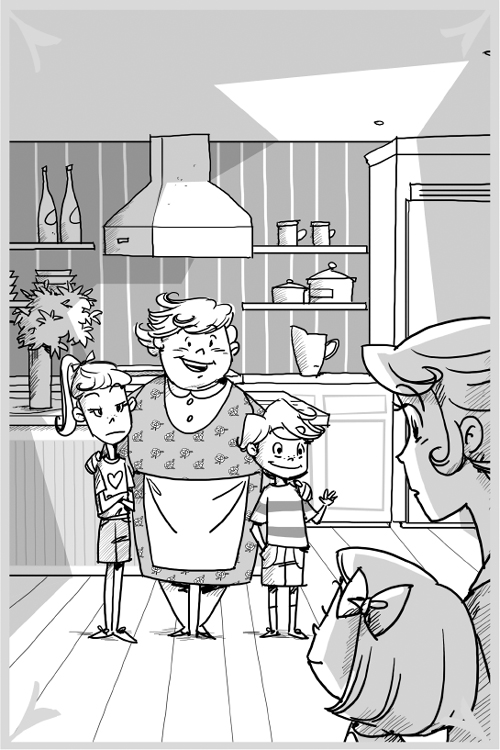 Clementine’s tummy twinged. Her mother looked at her and nodded.

Mrs Dent set about cutting some more cake for the children and directed them to sit at the other end of the table, near Clementine.

Soon the adults were chatting about this and that and the children were left to their own devices.

‘How old are you?’ Della asked Clementine with a mouthful of cake.

‘I’m five and a half,’ the younger girl replied.

Della sighed. ‘Granny said that I’d have someone to play with but you’re way too young. I only play with people who are seven and over.’

‘I can do lots of things a seven-year-old can,’ Clementine said hopefully.

‘I can skip with a rope,’ Clementine said.

‘Any baby can do that,’ Della scoffed.

‘I can read lots of hard words and I can make up poems,’ Clementine said.

‘No, you can’t.’ Della shook her head. ‘Five-year-olds are too stupid to make up poems.’

‘That’s not true,’ Clementine said. She wondered why this girl was so mean and bossy. It seemed strange that her grandmother was about the kindest person Clemmie had met, but Della was crabbier than her teacher, Mrs Bottomley, and Joshua Tribble put together.

‘I can make up a poem about you,’ Clementine blurted.

‘Yes, I can,’ Clementine nodded.

‘Show me then,’ said Della.

Clementine was trying to remember what Uncle Digby had taught her about limericks.

‘There once was a girl called Della . . .’ Clementine stopped. She was thinking about the next line. It was hard to come up with something that rhymed with that name.

Uncle Digby had half an ear on what was happening and leaned over and whispered something to Clementine.

Clementine tried again: ‘There once was a girl called Della, who was in love with a cute little fella –’

Della glared at Clementine. ‘I don’t love anybody!’

‘But I haven’t finished yet.’ Clementine felt her bottom lip wobble. She hadn’t meant to upset the girl.

‘Come on, Freddy. We’re going upstairs.’ Della pushed back her chair and pinched her brother’s arm.

‘Della, why don’t you take Clementine with you too?’ Mrs Dent suggested.

But the girl raced off. Freddy turned and looked at Clementine. He gave an embarrassed half-smile and scurried from the room.

A fat tear sprouted in the corner of Clementine’s eye.

‘Are you all right, darling?’ her mother asked.

Clementine brushed it away and nodded.

Digby Pertwhistle leaned over and kissed the top of the child’s head. ‘Don’t worry about her, Clemmie. I don’t think she appreciates poetry.’

‘Did Della say something to upset you?’ Mrs Dent asked from her seat at the other end of the table.

Clementine shook her head. She didn’t want to get anyone in trouble, especially not if she had to share the house with them for the next week. 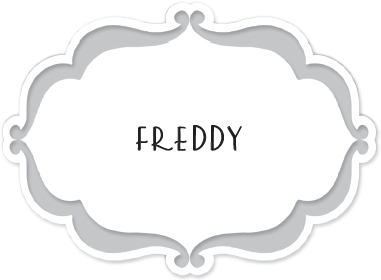 'Shall we go for a walk around the village?’ Lady Clarissa asked Clementine as they climbed the stairs to their room.

Clementine nodded. ‘Will Aunt Violet and Uncle Digby come too?’

Her mother shook her head. ‘Uncle Digby’s going to have a lie down and I suspect Aunt Violet might be planning a rest too.’

‘Is Uncle Digby all right?’ Clemmie’s voice was anxious. Since he’d spent time in hospital earlier in the year, she worried a lot about the old man.

‘Oh, yes, darling. I think the drive just took it out of him – and having the car break down was a little bit stressful.’

‘Yes,
especially
with Aunt Violet there,’ her mother agreed.

The pair walked along the hall to their room at the front of the hotel. It had a beautiful view over the harbour. Aunt Violet’s room was even bigger, with a bay window seat. Uncle Digby’s room was on the other side of the hall, looking over the back garden.

Lavender appeared to be snoozing in her basket. But as soon as Clementine picked up the sparkly red lead that was hanging on the wardrobe door, the tiny pig scrambled to her feet and danced about at the child’s knees.

‘Someone’s keen to go exploring,’ said Lady Clarissa as she grabbed a pink cardigan for Clementine and threw a white jacket around her own shoulders.

Clementine snapped Lavender’s lead onto her collar and the trio set off.

Downstairs, they bumped into Mrs Dent, who was balancing a stack of plates from the dining room.

‘Have a good walk,’ the old woman said with a smile. She carried on into the kitchen.

‘Oh, I forgot the camera,’ Lady Clarissa said. ‘I’ll just dash up and get it.’

Clementine was left standing on her own in the entrance hall. ‘Mrs Dent’s lovely, isn’t she, Lavender?’ Clementine said to the little pig. ‘But I’m not sure about Della. I don’t think she likes me.’

The floorboards creaked and Clementine spun around. She saw a face peeking out from one of the doorways. It was Freddy.

The boy’s blue eyes widened underneath his mop of blond hair. ‘Is that a pig?’

‘She’s cute,’ the boy replied as he took some tentative steps towards them. He knelt down and gave Lavender a rub on the neck. 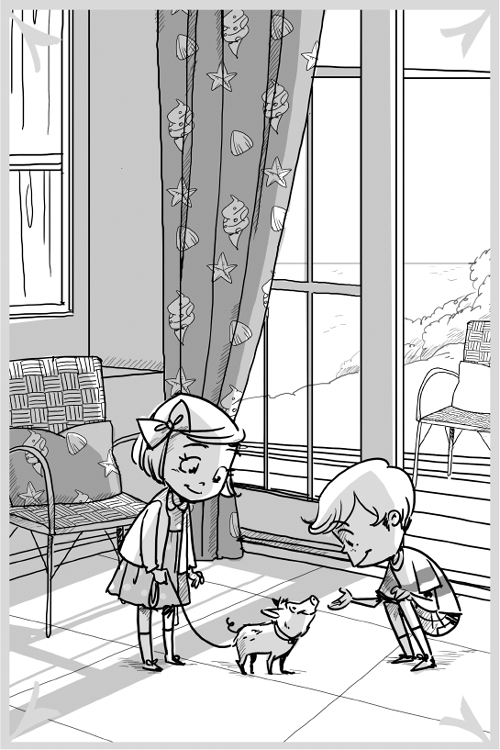 The little pig repaid him by nibbling his fingers.

‘She’s making up a dance,’ said Freddy. ‘She does that all the time.’

The lad looked up and smiled. ‘Hello. Are you going for a walk?’

Clarissa looked at her daughter and raised her eyebrows ever so slightly. Clementine smiled and nodded.

‘Yes, of course, but you’ll have to ask your grandmother,’ Clarissa said.

The boy dashed to the kitchen. He was back in no time, grinning. ‘Granny said I could go.’

‘What about your sister?’ Clarissa asked. ‘Do you think she’d like to come as well?’

‘You can be our tour guide,’ Clementine said.

Freddy nodded. ‘Can we go now?’

Lady Clarissa thought the lad was awfully eager to get moving. He rushed down the hall and wrenched open the front door.

‘Come on, there’s a lot to see,’ the boy said as he held the door open for Lady Clarissa, Clementine and Lavender.

As Freddy pulled it shut behind him, a shrill voice screeched, ‘Freddy, where are you? You’re supposed to be helping me with my dance.’

There was the sound of a door slamming and pounding feet on the stairs.

Clementine looked back at the house. ‘I think that was your sister.’

‘I didn’t hear anything,’ the boy replied and bounded off down the garden path.

Clementine looked at her mother, who shrugged, and the pair kept walking. 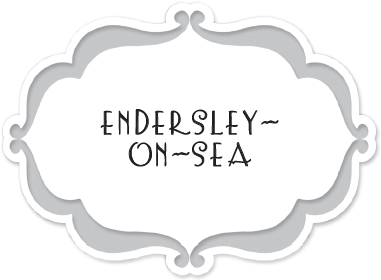 Freddy turned out to be a wonderful guide indeed. He introduced Clementine and her mother to Mrs Lee, who owned the village store, and Mr Alessi, the fish and chip shop owner. Mr Alessi’s brothers ran a small fleet of fishing boats that were moored in the harbour. Freddy took them past Mr Phipps’s workshop, where Uncle Digby’s little car was hoisted up high. Lastly, they met Mrs Pink, who owned the bakery and tearooms.

Clementine thought the village was one of the prettiest she’d ever seen. She loved the whitewashed houses and shops and grand sandstone buildings. Just past the harbour was the beach. On a grassy knoll behind that was a caravan park with mobile homes of all shapes and sizes dotted across green lawns. There were tents too. Some were small, while others looked almost like houses.

Demon's Offer by Tamara Clay
Submarino by Lothar-Günther Buchheim
The Seduced by Donna Grant
The Shipping News by Annie Proulx
Number Seventy-Five by Fontainne, Ashley
Hearts in the Crosshairs by Susan Page Davis
Whos Loving You by Mary B. Morrison
Doomsday Warrior 11 - American Eden by Ryder Stacy
Hong Kong by Stephen Coonts
City Boy: My Life in New York During the 1960s and '70s by Edmund White
Our partner