Tears were streaming down the child’s face. ‘My leg hurts,’ Della sniffled. She wiped her nose with the back of her hand and reached down to scratch her thigh. ‘Something did sting me. It wasn’t just the seaweed.’

Lady Clarissa stopped and inspected Della’s leg. ‘I’m sure your grandmother will have some calamine lotion.’

Lady Clarissa turned and called back to Clementine, ‘Clemmie, why don’t you take your friends up to our umbrella. Tell Aunt Violet and Uncle Digby that I’m taking Della home and ask them to keep an eye on you and Freddy. You can all have some drinks and a snack.’

The child nodded. Her mother and Della walked away up the beach.

Clementine led her new friends to where Aunt Violet and Uncle Digby were sitting.

‘Hello Aunt Violet,’ Clementine shouted as she bounded up to her chair.

The woman gave a snort. ‘Good heavens, Clementine, you don’t need to scare me half to death.’

‘Of course not.’ Aunt Violet sat up straighter.

‘Mummy said that we could have something to eat and a drink.’ She motioned towards her friends.

‘Are we taking in orphans?’ Aunt Violet asked. She tapped her foot on Uncle Digby’s bare leg. The man was snoring gently.

‘We’ve got to feed the children. I don’t know where Clarissa has swanned off to,’ Aunt Violet grumbled.

‘Mummy’s taken Della home because she’s got a sunburn,’ Clementine said. ‘And she asked if you could look after us.’

Aunt Violet grimaced. Uncle Digby dug around inside the cooler bag and handed drinks to the children.

‘Hello, I’m Alice-Miranda Highton-Smith-Kennington-Jones,’ one of the new girls said. She offered her hand to Aunt Violet.

The woman perked up immediately. ‘Did you say Highton-Smith-Kennington-Jones?’

‘Oh, how lovely to meet you.’ Aunt Violet took the child’s tiny hand into hers and gave it a shake. ‘We’re practically neighbours, you know. We’re at Penberthy House.’

Alice-Miranda smiled and introduced her friends.

Jacinta stepped forward to say hello and tripped on the edge of a towel. She went flying and sent sand all over Aunt Violet.

‘So you should be,’ Aunt Violet tutted.

The children enjoyed their snacks and then went back to the sandcastle. They decorated it happily until Millie’s mother called the older girls to go in.

Clementine hoped so too. She and Freddy farewelled their new friends.

‘Do you want to go and look at the cave now?’ Freddy asked Clementine.

The girl nodded. ‘But we’ll have to take Uncle Digby or Aunt Violet.’

‘Yes, but they can just have a rest where your mother did yesterday,’ said Freddy. He didn’t want the grown-ups spoiling their adventure.

Clementine returned a minute later with Uncle Digby in tow. ‘You don’t have to come all the way with us, Uncle Digby. There’s a big rock you can sit on.’

‘All right, then. Can I bring my book?’ the old man asked.

Uncle Digby walked back to their camp site to get it.

‘She’s asleep. Aunt Violet said that she’d look after her.’

Clementine and Freddy were armed with buckets in case they found any treasure to bring back, and Freddy had the little torch in the pocket of his board shorts.

Uncle Digby walked back to the children.

‘Don’t worry, Uncle Digby, we’ll be very careful,’ Clementine told the old man. She grabbed hold of Freddy’s hand and they ran off towards the rocks. 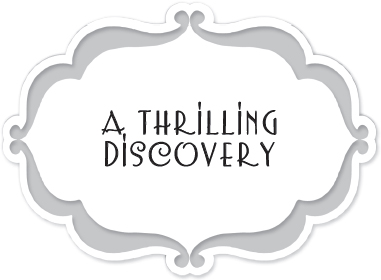 Freddy and Clementine hopped over the rocks just as they had done the day before. The pools of water sparkled in the sun as Clementine crouched down to look for the octopus. It was doing a good job of hiding. She could only see some shells and a couple of tiny crabs.

‘Come on, Clementine,’ Freddy shouted as he jumped from rock to rock.

She caught up to him where the rock shelf curved around the small headland.

To get to the cave, they had to climb down to a lower level. Clementine noticed that the waves were bigger now and every few minutes the surf would spray upwards, sending a shower of sea water onto the edge of the platform. A little channel ran between the rocks and cave’s mouth, but there was only a trickle of water in it.

Clementine and Freddy hopped down onto the sand.

‘Do you really think there could be treasure inside?’ Clementine asked, her eyes wide.

Freddy shrugged. ‘I didn’t find any last time, but I didn’t have a torch then so I couldn’t see properly. Granny says there used to be pirates on this coast a long time ago.’

Clementine’s tummy fluttered. This really was a proper adventure.

Freddy took the torch out of his pocket. He pulled the vines back from the cave entrance and shone the light inside. Then he took Clementine’s hand and the two children crept inside.

He shone the light straight ahead of them. Five rectangular stones stuck out of the sand like giant’s teeth. Then he directed the torch at the sandy floor and up to the smooth curve of the roof. It didn’t look like there was any treasure. Just a couple of empty soft-drink bottles lying in the sand. The cave wasn’t nearly as deep as Freddy had hoped, either.

Clementine squeezed Freddy’s hand. ‘It’s really smelly in here. Do you want to go back for a swim?’

Just as the children turned to leave, Freddy’s torchlight caught something unexpected.

Freddy pointed the torch back to the same spot. Poking out from behind one of the stones were two red eyes. They glowed in the darkness. 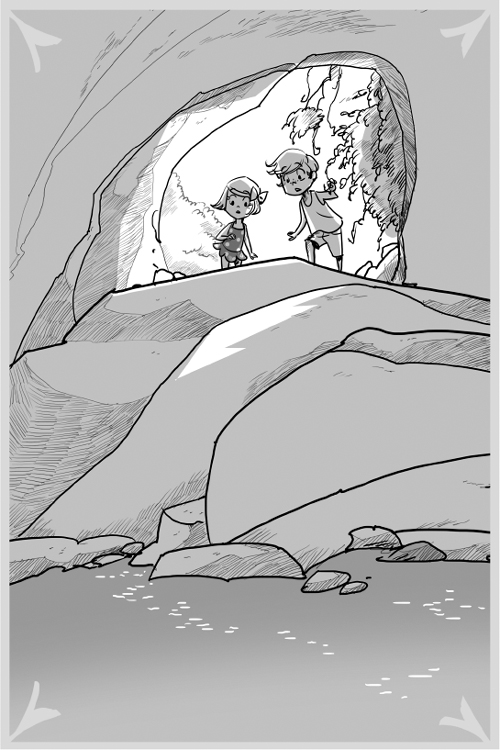 ‘What’s that?’ the boy breathed.

All of a sudden there was a strange barking sound.

Freddy squinted. ‘It must be a puppy.’

‘What if it’s lost?’ Clementine said. ‘We should help it.’

‘Maybe I can keep it?’ Freddy felt a rush of excitement as he imagined a new pet. He loved Lavender and had been planning to ask his parents if he could have a pet pig – but a dog might be even better.

The two children walked closer to the creature. It had a long body and a funny oval head with tiny little ears sticking out at the sides.

The creature barked again and stretched upwards. It danced from one side to the other.

Clementine didn’t know much about seals, but this one was small and very cute. She walked closer and reached out.

‘We learned about seals at school,’ Freddy said. ‘If people pet them, they get confused.’

‘What do they eat?’ Clementine asked.

‘I don’t know,’ Freddy said with a shrug. ‘There are lots of seals on the next beach around from here. He looks okay. Maybe he’s just having some time out from a bossy sister.’

Clementine giggled. ‘Do you think we should tell Uncle Digby?’

Freddy watched as the creature swayed from side to side. 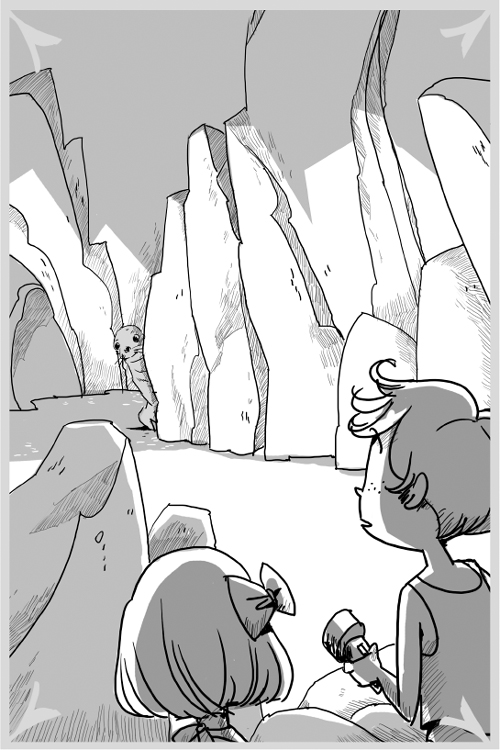 ‘You know, he could be our special secret,’ Freddy said. He liked the idea of having something only he and Clementine knew about.

The seal looked at the children with its big brown eyes.

‘Come on, Freddy, we should go or Uncle Digby might get worried.’ Clementine tugged at the boy’s arm.

The two children left the cave and scrambled back up onto the higher rock ledge. They trod carefully between the pools.

Freddy’s eyes were still shining with excitement. ‘That was so cool!’

‘Hello there,’ said Uncle Digby as the children approached. ‘I was just about to come and find you. I thought you might like to go for a swim and then we can get some lunch.’

‘You should have seen what we found, Uncle Digby,’ Clementine burst out.

Freddy nudged her and frowned.

‘I can’t tell you because it’s a secret,’ she said.

‘Oh, I see,’ Uncle Digby said seriously as he tried not to smile. 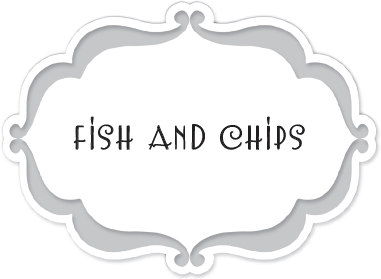 'I can’t remember the last time I had fish and chips on the beach,’ Aunt Violet said as she waved a plump chip in the air.

Uncle Digby had taken Clementine and Freddy to Mr Alessi’s to buy fish and chips for their lunch. In the meantime, Lady Clarissa had returned to the beach. She had left Della at home with her grandmother, whining about her sore leg and sunburn.

Clementine watched a seagull that had landed close by. It was stalking around their camp.

Her great-aunt popped her chip into her mouth and reached for another. This time she wasn’t quick enough. The cheeky grey-and-white gull raced in and plucked the tasty morsel from her fingertips.

‘Good heavens!’ Aunt Violet turned to face the feathered thief. ‘Get away from me, you horrid beast.’

Everyone laughed. Lavender ran towards the bird, grunting and squealing.

Uncle Digby grinned. ‘Perhaps you shouldn’t wave your chips around like a conductor’s baton, Miss Appleby.’

Aunt Violet leaned forward to protect her food. ‘Thank you, Lavender – at least you’re looking after me.’ She offered the little pig a chip.

Fortunately, one of the Alessi Brothers’ fishing boats puttered into the harbour a minute later. Every seagull on the beach flew over to see if any undersized treats would be thrown to them.

Just as the group finished their lunch, dark clouds rolled across the sky and thunder rumbled out at sea. Lady Clarissa gathered up the towels. Even Aunt Violet pitched in by folding the chairs. Uncle Digby just managed to grab hold of the beach umbrella as the wind whipped it out of the sand.