Clementine took her bath while her mother gave Lavender a quick rinse in the shower. The little pig enjoyed the warm water, snapping at the spray and dancing about on the tiles. Clementine got dressed and wrapped Lavender in a towel.

‘You smell nice,’ Clementine said and nuzzled the pig’s face. Lavender repaid her with a nibble on the nose.

‘Clemmie, I’m going to get changed for dinner,’ said her mother. ‘Why don’t you see if Freddy and Della want to play?’

Clementine took Lavender and headed down the hall. She didn’t notice Della sitting near the top of the stairs leading up to the second floor.

‘Why do you have a pig?’ the child asked tartly.

‘Well?’ Della stood up and stumped down the stairs towards Clementine. ‘Why don’t you have a normal pet like a dog or a cat or a guinea pig?’

‘Mummy won her at the fair,’ Clementine replied. Lavender looked up at her mistress and gave a squeak. ‘Aunt Violet has a cat. His name is Pharaoh and he’s a sphynx.’

‘Yes, he is. He’s bald and wrinkly and sometimes he scares the guests at home,’ Clementine replied. ‘I didn’t know what he was at first because he doesn’t look like any other cats I know.’ 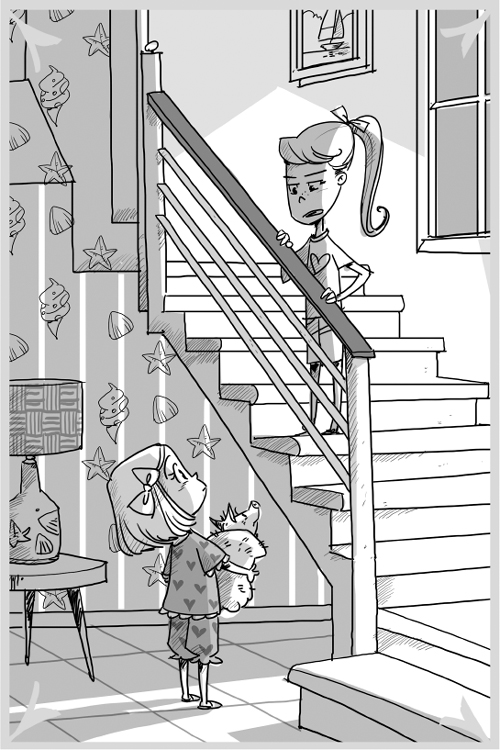 ‘Well, I have a pet python,’ the girl said, her eyes narrowing. ‘It’s five metres long and we feed it all sorts of meaty little creatures.’

‘That’s a good name for a python,’ Clemmie said quietly.

Clementine drew herself up tall and shook her head. ‘No, I’m sure that your granny doesn’t let her roam around the house. I have a toy python. Once, I left it in the Rose Room and the lady who was staying there screamed and screamed because she thought it was real. It wasn’t very good for business because Mummy had to give her a big discount and make her lots of tea so she would calm down.’

‘We live in a hotel,’ added Clementine.

Clementine nodded. ‘Yes, we do. It’s called Penberthy House and it’s very big and old and it’s getting a new roof, so that’s why we’ve come on holidays.’

‘Well, it’s not as big as our hotel,’ Della snapped.

Clementine looked around her. Penberthy House was much larger and grander than Mrs Dent’s guesthouse.

Della glared at her.

‘Because Mummy said I should find Freddy so we can play a game,’ Clementine said.

‘Do you always do what your mother tells you?’ Della asked.

Clementine thought about it and then nodded. ‘I try to.’

‘You’re such a baby. Only babies do everything their mothers tell them,’ Della sneered. ‘Anyway, Freddy’s tied up at the moment.’

‘You can play a game with me instead,’ Della said.

Clementine looked at the girl. ‘But I thought you only played with people who were over seven.’

‘Usually I do. But seeing that there’s no one over seven here to play with now, I suppose you’ll have to do.’

‘You don’t have to,’ Clementine said.

‘Don’t you
want
to play with me now?’ Della sighed.

‘Okay,’ Clementine nodded. ‘What should we play?’

‘Hide-and-seek,’ Della said. ‘You hide and I’ll find you and the pig.’

Clementine smiled. She liked hide-and- seek – especially at home where there were lots of places to disappear. But she had no idea where to hide here. She’d only been downstairs and in her own room with her mother.

‘I don’t know where to go,’ Clementine said.

‘Up there.’ Della pointed to the top floor. ‘But you have to stay on the left-hand side of the stairs.’

‘You do know your left and right, don’t you?’ asked Della.

Clementine nodded. Secretly, she was trying to remember which was which.

‘Can Freddy play too?’ Clementine asked.

‘No. He went to the beach without me, so now I’m playing a game without him,’ Della said, flicking her fingernails. ‘Well, off you go. I’ll count to fifty and then I’m coming to get you.’

Clementine picked up Lavender and scampered up the stairs to the top floor. She reached the landing and looked each way. She couldn’t remember if left was this way or that way. There were several doors along both sides of the corridor. Clementine ran to the one furthest along. She pushed it open.

Inside was a pretty room with blue floral wallpaper. There was a large bookshelf and an iron bedstead. Clementine wondered if this was where Della slept. There was another door on the far wall. Clementine turned the handle and found herself in a bathroom. She hid behind the towel hanging on the rail, pulling it down so it skimmed the floor.

Clementine heard a voice in the hallway.

‘Ready or not, here I come,’ Della shouted. But the footsteps seemed to be running away.

Clementine thought about left and right. Mrs Bottomley had taught the class that the left hand makes the shape of a capital L. Clementine put Lavender down and held up her hands. Oops – she’d turned right at the top of the stairs.

‘Come on, Lavender, let’s go before we get in trouble.’ Clementine picked up the little pig and they dashed out of the bathroom and back through the bedroom. She opened the door and peeked out. Della was nowhere to be seen. Clementine scurried along the hall back to the landing and crouched down beside a fire extinguisher, with Lavender sitting next to her.

‘Where are you?’ Della called in a singsong voice.

Clementine held her breath. She could feel her heart beating in her ears. The door furthest down the corridor to the left banged and Della stomped outside. Clementine was sure that the girl would spot her but instead she dived through the next door.

‘What’s that?’ she whispered and looked at Lavender with a frown. The noise was getting louder. There was a mumbly voice as well as the tapping now.

Della reappeared in the hallway, banging the door shut behind her.

‘You’d better not be down the other end or you’ll be in trouble, Clementine! I told you not to go there!’ Della was stomping towards the child and her pig.

Clementine crouched down as far as she could go and Della walked right past her. Lavender let out a little grunt and the child spun around.

‘There you are!’ Della pointed her finger. ‘How come I didn’t see you before?’

Clementine’s eyes grew wide. ‘I have to go downstairs. I think Mummy’s calling me.’ She picked up Lavender and scurried away.

‘But it’s my turn to hide,’ Della protested. She pouted and stamped her foot.

Clementine raced down two flights of stairs and along the hall to the kitchen. She pushed her way inside and let out a deep breath.

‘Are you all right, dear?’ Mrs Dent turned from where she was stirring a huge pot on a gigantic old stove.

Digby Pertwhistle was busy doing a crossword, Lady Clarissa was flicking through one of Mrs Dent’s cookbooks and Aunt Violet was sitting at the other end of the table, nibbling a biscuit and drinking tea.

‘Would you like a glass of milk and a brownie?’ Mrs Dent asked.

‘I’m really hungry.’ Clementine climbed onto the chair beside Uncle Digby. Lavender snuffled about the kitchen floor looking for crumbs. ‘And I promise to eat all my dinner.’

Clarissa smiled. ‘All right. We are on holidays, after all. An extra treat won’t hurt.’

‘What have you been up to?’ Uncle Digby asked.

‘I was playing hide-and-seek with Della,’ Clementine said.

‘Della said that she has a python called Polly,’ Clementine explained.

‘Della has a good imagination, that’s what she has.’ Mrs Dent rolled her eyes, wondering what sort of dreadful tales her granddaughter had been filling Clementine’s head with.

‘I heard something banging and Della said it was Polly,’ Clementine said.

Mrs Dent placed the milk and a plump brownie in front of Clementine.

‘No, no, there’s no Polly,’ Mrs Dent said, shaking her head. ‘You don’t need to worry about that.’

Clementine sighed. ‘Phew. When Aunt Violet first brought Pharaoh to our house I thought he was a snake and I was really worried that he might want to eat Lavender for dinner.’

‘Pharaoh loves that pig,’ said Aunt Violet, looking up from the book she was reading. ‘Oh, I wonder how my baby’s getting on.’

‘I’m sure Mrs Mogg’s spoiling him rotten and he’s having a wonderful time,’ said Lady Clarissa.

‘Clementine, was Freddy playing with you too?’ asked Mrs Dent. She opened the oven to check on the roast inside.

The child shook her head. ‘No. Della said that he was tied up.’

‘Oh no, not again!’ Mrs Dent slammed the oven door. ‘Poor boy. I’ll be back in a minute. Digby, can you watch the stove, please?’

In a flash Mrs Dent was gone. 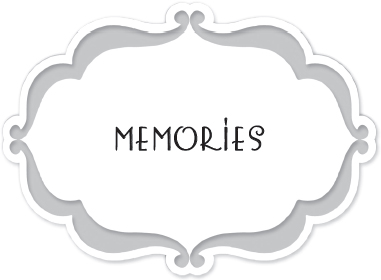 Mrs Dent returned to the kitchen a short while later with Freddy and Della in tow. The girl’s eyes were red-rimmed and her cheeks were puffy.

Mrs Dent headed for the stove to take over from Uncle Digby. Della walked straight to the biscuit barrel and removed the lid.

‘No, Della,’ her grandmother said without turning her attention from the stove. ‘You and your brother can set the table in the dining room, please.’

The old woman smiled at him. ‘Thank you, Digby. I’m a bit behind, I’m afraid.’

‘I thought you were on holidays, Uncle Digby,’ Clementine said.

‘I am. But Mrs Dent has a lot to do and you know I can’t sit still for long,’ he replied.

Lady Clarissa asked if she could help their host with anything else. Mrs Dent insisted she was fine and suggested the ladies make themselves comfortable in the sitting room until dinner was ready. Clementine gathered up Lavender, who had found herself a warm spot beside the oven. She followed her mother and Aunt Violet down the hall and into the front room. Aunt Violet went back to her book and Lady Clarissa flicked through a magazine.

Board games, colouring pencils and sheets of paper were stacked on a bookshelf in the corner. Clementine decided to draw the rock pools and the octopus she and Freddy had found earlier.

A little while later, Freddy appeared at the door and announced that dinner was ready in the dining room.

Clementine skipped towards the boy, holding her picture.

The children scooted down to the dining room and took their seats. The tension from earlier had evaporated and everyone was enjoying the delicious roast lamb and vegetables.

This time Clementine was sitting between her mother and Freddy, and Della was at the other end of the table next to her grandmother.

‘So, children, where do you live?’ Uncle Digby asked.

‘Our father is the boss of the whole town,’ Della said smugly.

Aunt Violet looked up and arched her left eyebrow. ‘Oh, really. What does he do?’

‘He’s hardly that, Della. You must stop exaggerating,’ her grandmother tutted.

‘He’s the Inspector Chief of the police,’ said Freddy.

‘No, he’s not,’ Della snapped. He’s the Chief Inspector. Anyway, I got to ride in the police car really fast with the siren on.’