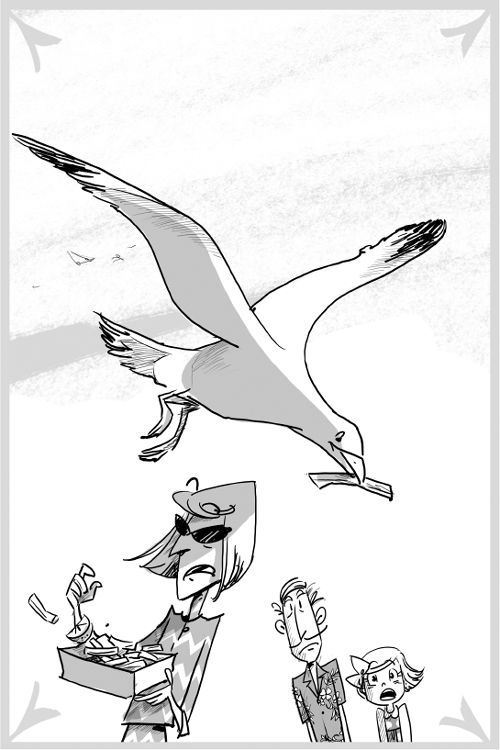 ‘We’d best make a run for it,’ Lady Clarissa called.

The group scrambled along the beach, up the steps and across the road. Lavender squealed and wriggled in Clementine’s arms. Freddy ran down the garden path and pushed open the front door just as the rain began to belt down.

‘Well, that was good timing,’ Lady Clarissa puffed. She directed the children to rub the sand off their feet and legs before they entered the hall.

‘Oh, there you are!’ Mrs Dent rushed towards them. ‘I was beginning to worry. Come and I’ll get you some tea.’

‘Is there somewhere I can put all this?’ Uncle Digby was balancing the umbrella, the beach chairs and a pile of towels.

‘There’s a utility room at the end of the hall.’

Mrs Dent had the kettle on in no time and poured two glasses of orange juice for Clementine and Freddy.

‘The child has managed to get herself burnt to a crisp. Clearly she did not have sunscreen on this morning when I asked her. Now she’s going to pay for it. In fact, I think she might have a touch of sunstroke,’ Mrs Dent tutted.

‘What about her leg?’ Lady Clarissa asked.

Mrs Dent frowned. ‘I think that was just some completely harmless seaweed. It might be a bit scratchy, but that’s all. Anyway, how was the rest of your day?’

‘It was great!’ Clementine exclaimed. ‘We made some new friends and we went exploring and we found –’

‘Well, it sounds like you’ve had a very adventurous day, my dears,’ Mrs Dent said as she hopped up to refill the teapot.

‘And another five to go,’ Clementine said.

‘We have to go home on Sunday,’ said Clementine.

Freddy didn’t ever want Clementine to go home. He wondered if Lady Clarissa would consider taking Della instead. 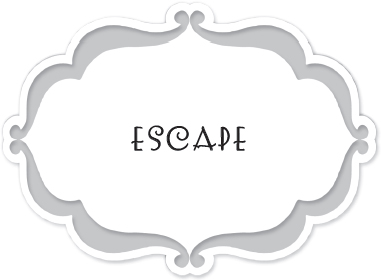 The rain lashed the coast for hours. Freddy and Clementine played Old Maid in the kitchen. Mrs Dent cooked dinner while she and Uncle Digby chatted about their childhoods. Aunt Violet and Lady Clarissa read in the sitting room. Della stayed in her room. She didn’t come down for dinner either. Mrs Dent took her a tray. She returned saying that the child was utterly miserable with her sunburn.

‘Will the storm be gone by tomorrow?’ Clementine asked Mrs Dent.

‘It should be. Storms like this usually come in a fury and leave just as quickly.’

But Mrs Dent was wrong. The next morning, Clementine looked out her bedroom window and discovered a grey, dreary day.

‘No beach today,’ she sighed and turned to her mother, who was lying in bed.

‘No, darling. But there are plenty of things you can do inside.’

Freddy and Clementine spent the morning playing board games in the sitting room with Uncle Digby and Lady Clarissa. Even Aunt Violet joined in for a round of Snakes and Ladders. Della stayed upstairs, ringing a bell constantly for her grandmother, until Mrs Dent stumped upstairs for the fifth time and brought the bell back down with her.

After lunch, Freddy and Clementine decided to do some drawing at the kitchen table. Clementine started drawing a picture of a seal, with great big brown eyes and little flippers.

‘I think the ears are cute,’ she said to Freddy. He was drawing an octopus strangling a crab. ‘What do you think, Lavender?’ Clementine held up her picture. The little pig looked up and grunted.

The kitchen door flew open and Della stalked into the room. ‘Where’s Granny?’

‘I don’t know,’ Freddy said with a shrug.

‘I want something to eat.’ Della yanked open the refrigerator door and peered inside.

A huge fish stared up at her from a platter.

She slammed the door and went to the biscuit tin, where she found two chocolate brownies.

‘Are you feeling better?’ Clementine asked. The girl’s face was bright red.

‘Sort of,’ Della said. She walked back to the table and stood beside Clementine, looking at the child’s drawing.

‘I know that,’ Della replied. She wasn’t about to say so, but she thought it was a good picture for a five-year-old.

‘I saw a seal at the beach,’ Della bragged, before taking a big bite of brownie.

‘You weren’t there,’ Della said.

‘I don’t believe you,’ Freddy retorted. ‘You’ve never seen a seal. But we have.’ He clamped his hands over his mouth but it was too late. The words had already escaped.

‘When?’ Della asked, narrowing her eyes.

Freddy ignored her and kept drawing.

Clementine couldn’t stay quiet any longer. ‘He’s not lying. We saw a seal in a cave yesterday, after you went home.’

‘It probably won’t be there any more,’ Clementine said. ‘But it was so sweet.’

‘I want to see the seal,’ Della said, stamping her foot.

Clementine looked out the kitchen window at the steely sky. ‘It’s raining.’

Della rolled her eyes. ‘We’ve got raincoats. Come on.’

‘I don’t think Mummy will let me go out,’ said Clementine. ‘She’s upstairs having a rest.’

‘You’re such a baby,’ Della scoffed.

‘She is not,’ Freddy said, his eyebrows knitting together fiercely.

‘You’re both babies,’ Della spat. ‘I’m going to see this seal whether you come or not.’

‘You won’t even find it,’ Freddy said, as his sister stormed out of the kitchen.

Clementine stared at Freddy. ‘Are you going to tell your granny?’

Freddy shook his head. ‘I don’t care if she goes. She won’t see anything. She didn’t even take a torch.’

Both children went back to drawing. A few minutes later, Clementine glanced around the room. ‘Where’s Lavender?’

Freddy peered around the room too. ‘I don’t know. She was here before.’

Clementine slipped down from her chair and walked around the kitchen, searching beside the stove and under the table.

‘She’s not here,’ Clementine said, frowning. She went into the hallway and glanced towards the front door. ‘Freddy! Come quick!’

Freddy flew out of his seat and into the hall. The front door was wide open.

‘Della!’ he called and raced onto the porch.

The front gate was open too.

Clementine stared at the boy, her blue eyes wide. ‘Come on. We’ve got to find Lavender.’

‘Wait a minute.’ Freddy ran back to the kitchen and grabbed his torch off the bench. 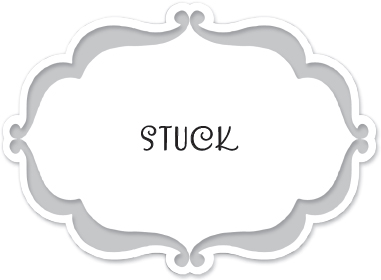 The sky was still dark but it had stopped raining. Clementine and Freddy ran out the front gate and across the road to the beach. Clementine’s voice rang out. ‘Lavender? Lavender!’

‘She probably followed Della,’ he said eventually. ‘Don’t worry. She can’t have gone too far yet.’

Clementine nodded. She hoped he was right.

Freddy looked down to the little beach but it was bare. He and Clementine ran along the wet sand towards the rocks.

‘Be careful, Clementine, it’s slippery,’ the boy warned as they scrambled over the platform.

‘Della, where are you?’ Freddy called.

‘Lavender!’ Clementine shouted. She turned around and was relieved to see a little grey figure dashing towards them. Clementine scooped the pig into her arms and kissed the top of her head.

‘What about Della?’ Clementine asked. ‘Do you think she’s in the cave?’

The two children picked their way around the headland, then leapt down across the little channel of water onto the tiny beach. Clementine gasped as she almost slipped in. She clutched Lavender tightly and looked back at the rising water. Freddy pulled the creeper back and shone the torchlight inside. 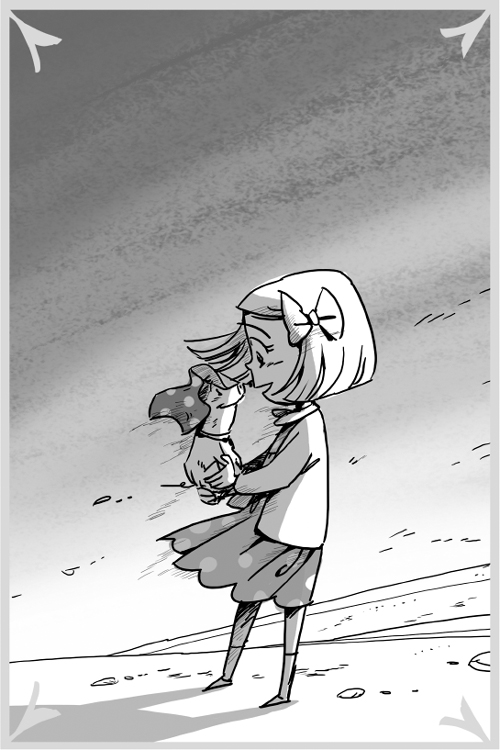 The empty soft-drink bottles were still there but there was no sign of Della or the seal.

‘She’s not here,’ Freddy said. ‘We should go back before Granny gets worried.’

Clementine turned around. The sun was peeking through the clouds. The rocks looked shiny and clean and the grass that grew along the edge of the cliff was bright green.

‘Freddy, look at the water. It’s too high,’ Clementine gulped. ‘How can we get back?’

Freddy spun around. The little channel separating the curve of beach and the rock platform was filling fast. Water was starting to force its way into the cave as well.

‘What does that mean?’ asked Clementine. She was holding Lavender tight.

‘The tide is the sea coming in and going out. The water gets deeper and shallower. But I think we can still get across now.’

Clementine shook her head. ‘I’m scared. It’s too deep. Is there another way?’

‘No, that cliff’s too steep. We can’t get up there. But it’s okay. The water never covers the whole beach. We can wait over there.’ Freddy pointed to a grassy spot that met the sand at the end of the tiny beach. ‘We’re safe. I promise. But we won’t be able to get across until the water goes down again.’

Clementine’s eyes filled with tears. ‘How long does that take?’

‘But Mummy will be worried.’ Fat tears began to flow down Clementine’s cheeks. Lavender turned and licked the salty drops away.

‘Don’t worry, Clementine. Someone will come,’ the boy said. But Freddy had a terrible feeling that it would be night-time before the tide went out again. 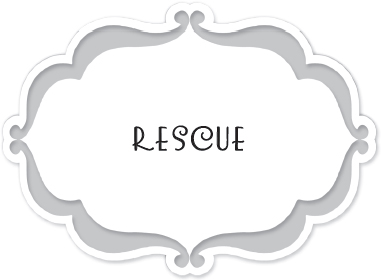 The Demented Z (Book 2): Desolation (Book 2) by Thomas, Derek J.
What Mr. Mattero Did by Priscilla Cummings
Marcii (The Dreadhunt Trilogy Book 1) by Ross Turner
The Madonna of Notre Dame by Alexis Ragougneau, Katherine Gregor
Mr. Darcy's Bite by Mary Lydon Simonsen
A Valentine For Christmas - A Regency Novella by Harper, Kate
Lauri Robinson by DanceWith the Rancher
Puzzle People (9781613280126) by Peterson, Doug
Justice for All by Radclyffe
Black Tide by Peter Temple
Our partner