Della nodded. ‘It was. We were chasing after a bank robber.’

‘You weren’t even there,’ Freddy said.

Della poked her tongue out at Freddy and made a face at Clementine.

There was a squeak and a grunt and Lavender waddled into the room.

‘Oh, you really are the most precious creature,’ said Mrs Dent as the little pig sniffed her way around the table. ‘Do you have any other pets, Clementine?’

The child shook her head. ‘Aunt Violet has Pharaoh. He’s a sphynx.’

‘Why didn’t you bring him too?’ Mrs Dent asked.

‘Pharaoh is something of a Houdini,’ said Aunt Violet.

‘Oh, Clementine, please don’t even say such a thing. I don’t know what I’d do if anything happened to my darling boy.’ Aunt Violet brushed a hand over her eyes.

Aunt Violet stared at the girl in horror. ‘How dare you? Pharaoh is anything but a stupid cat. He’s intelligent and he’s sweet and . . .’

‘He’s ugly but, you know, I’ve got used to him now. He’s really quite lovely,’ Clementine added.

Aunt Violet glared at Clementine. Her mother and Uncle Digby tried hard not to smile. If there was one thing they could always rely on, it was Clementine’s honesty.

‘Goodness,’ Mrs Dent laughed. ‘You just reminded me of another funny pet, Clementine. When I was a little girl my cousin Teddy had a –’

‘How did you know that, Uncle Digby?’ Clementine asked.

The man grinned. ‘Rosamund, were you by any chance called Mozzie as a girl?’

A huge smile spread across the woman’s face, as if that one word had opened a vault of memories. ‘Oh, my goodness. I’ve got it. You’re Diggy,’ she said and began to laugh.

‘But how do you know each other?’ Clementine asked.

Mrs Dent took a sip of water and then began the story. ‘We were just children. I was about eight or nine.’

‘And I would have been twelve,’ Uncle Digby added.

‘Your Uncle Digby came to stay with my cousin Teddy, here in this house. It was my aunt and uncle’s holiday home. They were much better off than we were and my parents were always happy for me to stay with the “posh relatives”, as they called them.’

‘And I adored the pair of them.’ Mrs Dent smiled. ‘I was like a puppy following them around everywhere.’

‘Has anything changed?’ Aunt Violet mumbled to herself.

‘Why didn’t you see each other again after that?’ Clementine asked.

Uncle Digby began to explain. ‘Teddy went off to boarding school. I don’t know why we lost touch. My parents used to bring me to Endersley-on-Sea every summer but Teddy was never here.’

‘My uncle took a job overseas so the house was hardly ever used, as I recall. Teddy and his sisters spent their holidays in Greece after that. Gosh, I adored Teddy and Diggy. I used to spy on the pair of you when you played cards. Diggy was a very handsome lad.’

Uncle Digby’s cheeks flushed. ‘Oh, get off with you. My ears stuck out far too much and I was as tall and skinny as a string bean.’

‘You could get married,’ Clementine said. ‘Uncle Digby never had a wife and your husband died, so you could.’

‘Clementine, what ridiculous twaddle are you talking about now?’ Aunt Violet snapped. ‘As if Mrs Dent would want to marry Pertwhistle. He’s hardly a catch, is he?’

But Rosamund Dent had a twinkle in her eye. ‘I don’t know, Miss Appleby. I’d say any woman would be lucky to have him. I’m surprised you haven’t snapped him up.’

Digby stood up and began to clear the plates.

‘You said we could have chocolate pudding,’ Della whined.

‘And I think you could have an early bed time,’ Aunt Violet said sternly. 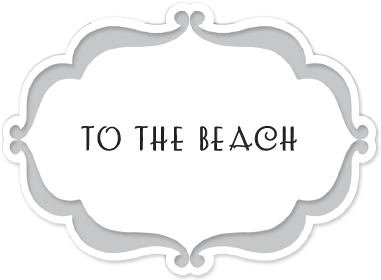 A sliver of sunlight shone through the small gap in the curtains in the front bedroom. Clementine yawned and stretched her arms above her head. She’d dreamt about building a sandcastle and couldn’t wait to get to the beach. She was looking forward to testing out the pretty red polka-dot swimming costume Mrs Mogg had made her, too. The kind woman had even sewn a matching hat for Lavender. Aunt Violet had said there was no way she was going to the beach with a pig in a bonnet.

‘Hello sleepyhead,’ said Lady Clarissa. She put her book on the side table and pushed back the bedcovers.

Clementine rolled over on her own single bed, which was beside her mother’s, and blinked her eyes awake. ‘Hello Mummy.’

‘Did you sleep well, darling?’

Clementine nodded. ‘I was tired.’

‘Well, you and Freddy did stay up quite late playing cards,’ her mother reminded her.

Lady Clarissa and Clementine put on their swimming costumes. Clarissa popped a yellow sundress over the top and Clementine had a matching polka dot dress to put on over her bathers. Clementine picked up Lavender’s red lead and the happy trio set off downstairs for breakfast.

‘Goodness me, I thought you two were going to sleep the day away,’ Aunt Violet said as she set her teacup down with a light thud.

Uncle Digby looked up from his newspaper, pulled a face at Violet and smiled hello to Clarissa and Clementine.

‘I suppose that’s why it’s called a holiday, Aunt Violet,’ Clarissa said. ‘I haven’t slept in for years.’

Clementine thought it was strange for Aunt Violet to talk about sleeping in. At home she did it all the time.

‘We’re going to the beach,’ the child announced. ‘Are you coming too?’

Clementine clapped her hands in delight. ‘Will you come swimming?’

‘Clementine, I haven’t been swimming in the sea since I was a teenager. I’m not about to start again now.’

‘Oh, don’t look like that. I might wade in the shallows but that’s all,’ the old woman said.

‘Yes, I haven’t had a chance to wear it since the cruise,’ Aunt Violet replied. She was referring to her three-month trip aboard the
Queen Mary 2
. Lady Clarissa had won the holiday in a competition and kindly given it to her aunt.

‘She’s gone to get the children up,’ said Uncle Digby.

‘Are you coming to the beach too, Uncle Digby?’ Clementine asked.

‘Will
you
take me swimming?’ she begged.

‘Sweetheart, I’ll take you,’ her mother said. ‘Please stop badgering Aunt Violet and Uncle Digby. Remember, they’re on holidays too and they can do whatever they like.’

‘You know what, Clementine. I used to love bodysurfing on this beach. I might just dig out my swimming trunks and join you,’ Digby said with a grin.

‘Is something the matter, Aunt Violet?’ said Clementine.

‘I don’t need to see a great tall prune on the beach. Prunes belong at the breakfast table.’

‘Who are you calling a prune?’ Digby Pertwhistle asked.

‘I’ll have you know there are quite a few muscles under this shirt.’ Uncle Digby raised his left arm and flexed his biceps.

Clementine giggled. ‘Uncle Digby, you don’t have any muscles –’

‘Thank you, Clementine. I thought you’d be sticking up for me.’ The old man grinned.

‘– but Aunt Violet has more wrinkles than you.’ The rest of the sentence was out of her mouth before she had time to stop it.

‘I do not,’ Aunt Violet retorted. ‘Pertwhistle’s got wrinkles on his wrinkles.’

The kitchen door flew open and Freddy rushed into the room. He was followed by his sister, who seemed to be dragging her feet. Freddy sat down next to Clementine, but Della stalked to the other end of the table and ignored everyone completely.

‘And you too, Lavender.’

‘Hello Mrs Dent,’ Clementine and her mother said in unison.

‘It’s a beautiful day,’ the woman declared, ‘but I believe we could be in for a storm this afternoon.’

‘Are you taking us to the beach too, Granny?’ Freddy asked.

‘But you always have a lot to do,’ the boy moaned.

Clementine looked at him and smiled. ‘You can come with us.’

Clementine and Freddy had been talking about exploring the cave before they went to bed last night.

‘Yes, of course he can. And Della too,’ said Lady Clarissa.

On hearing her name, the girl glanced up at Clementine. Clementine’s tummy twinged again, just as it had the day before.

‘Oh, Clarissa, are you sure?’ Mrs Dent asked.

‘Yes, of course. Uncle Digby and Aunt Violet are coming along so there’ll be plenty of eyes to keep watch.’

‘Would you like to go?’ Mrs Dent asked her grandchildren.

Della shrugged. ‘I suppose so.’

Freddy beamed at Clementine. ‘I’ll get my bucket and spade,’ he said, then leaned over and whispered to Clementine, ‘and my torch.’

‘We can make a sandcastle,’ Clementine said. ‘I’ll take my bucket and spade too.’

Breakfast was over quickly. Mrs Dent insisted on packing some freshly baked chocolate cake and honey jumbles, along with the leftover brownies and some apples and bananas. She added a thermos of tea and some cold drinks too.

Della and Freddy reappeared with their swimmers on underneath their clothes. Freddy’s face was lathered white with sunscreen.

Mrs Dent took her grandchildren to one side. ‘Now, you make sure that you do everything you’re asked, please. I don’t want to hear any reports of bad behaviour. And have you put on sunscreen, Della?’

‘Yes,’ the child grouched. ‘I don’t get sunburnt, anyway.’

Mrs Dent gave her granddaughter a sceptical look, then turned to Lady Clarissa.

‘Thank you, Clarissa. I do appreciate having some time to catch up on the paperwork,’ the old woman said.

‘It’s a pleasure. Believe me, I know how hard it is to get all the jobs done when you have a house full of guests,’ Lady Clarissa replied.

Aunt Violet had disappeared upstairs and returned wearing the most enormous blue sunhat.

‘You know absolutely nothing about fashion, do you, Pertwhistle?’ The old woman rolled her eyes behind her dark glasses.

‘As long as she doesn’t injure anyone on the street, I suppose,’ Uncle Digby teased. ‘She could take someone’s head off with that thing.’

‘And what are you wearing?’ Aunt Violet looked the old man up and down. ‘I doubt those twig legs of yours have seen the sun since you were a boy.’

Clementine had never seen Uncle Digby in shorts before either. His legs
were
a bit like a seagull’s, she decided.

‘That’s it. I’m calling a truce. It’s about time you two tried to be nice to one another,’ Lady Clarissa said sternly.

Uncle Digby hung his head. ‘Oh, all right. I’ll do my best.’ 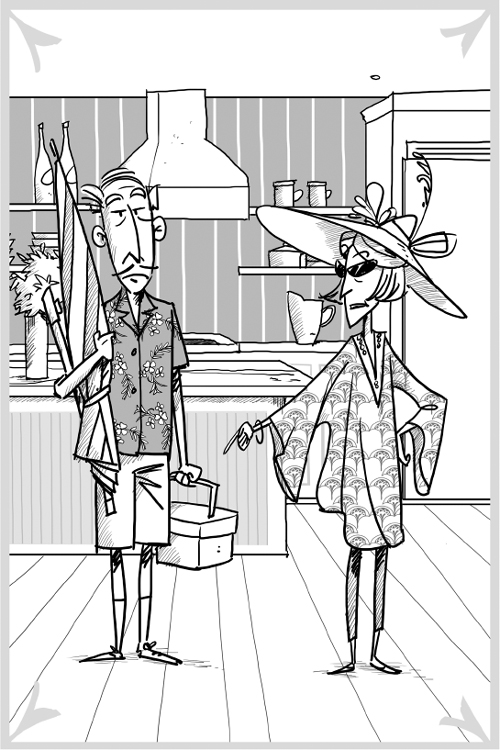 Urn Burial by Kerry Greenwood
A Proper Taming by Overfield, Joan
A Brief History of the Spy by Simpson, Paul
The Suite Life by Suzanne Corso
The Book of the Seven Delights by Betina Krahn
Kindling Flames: Flying Sparks (The Ancient Fire Series Book 2) by Julie Wetzel
Addison Cooke and the Treasure of the Incas by Jonathan W. Stokes
Hard to Handle by Lori Foster
Killer Instinct by Zoe Sharp
Spirits Rising by Krista D Ball
Our partner