‘Granny says the caravan park has the best spot in town,’ Freddy explained as they walked along the seawall that separated the harbour and the beach.

‘Can we stay in a caravan one day, Mummy?’ Clementine asked. She liked the thought of a little home where everything was in reach. It would be different to Penberthy House, which was enormous.

‘That’s a lovely idea, sweetheart,’ Lady Clarissa said with a smile. ‘Perhaps we can save that for a holiday for the two of us. I don’t think Aunt Violet would approve.’

Clementine giggled at the thought of her great-aunt sleeping in a caravan, or even worse, a tent. ‘Can we walk on the sand?’

Lady Clarissa nodded. ‘Yes, of course. Give me your shoes and you and Freddy can take Lavender for a run along the water’s edge.’

Clementine kicked off her sandals and Freddy did too. She carried Lavender down a set of old concrete steps and then set the pig down on the beach. Clementine and Freddy laughed as Lavender hopped about, unaccustomed to the strange texture under her trotters. Clarissa snapped some photographs of the unsuspecting children.

Clementine unclipped her lead and began to run towards the sea. The water was almost flat, with just the tiniest of waves curling onto the shore. The little pig chased after her but stopped when she reached the wet sand.

Lavender put one foot forward, dipping her trotter into a puddle, then she squealed and raced away towards Freddy.

Clarissa laughed and sat down on the steps, enjoying the warm sun on her back. 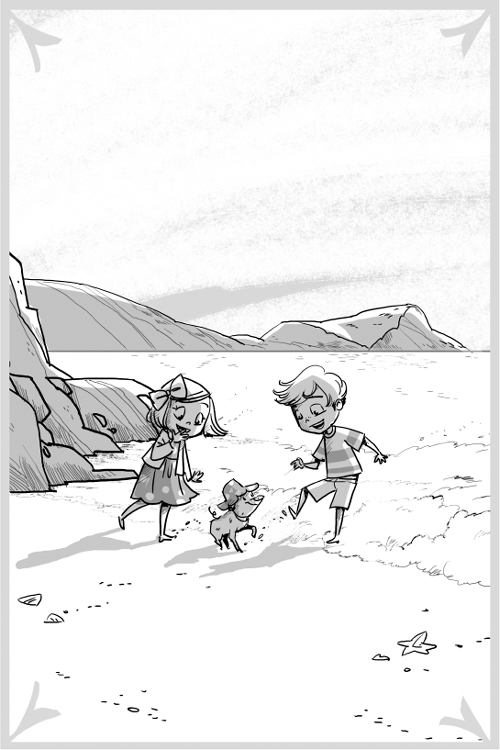 Eventually Clementine coaxed Lavender into the shallows. She and Freddy hooted with laughter as they ran in and out with Lavender chasing them.

After a while, Clementine took Lavender up onto the dry sand and the two of them plonked down. Freddy sat beside them.

‘What class are you in?’ Clementine asked the boy.

‘School’s okay.’ Freddy shrugged. ‘But I like holidays better.’

‘Where are your mum and dad?’ she asked, looking up at the sandy-haired boy.

‘Dad had a conference and Mum went too, so that’s why we’re staying with Granny. Where’s your dad?’ Freddy asked.

Clementine paused. She remembered when she told Angus Archibald that her father was a mystery and he’d told her that was stupid.

‘You have a nice mum,’ Freddy said, smiling. ‘And your Uncle Digby is funny . . . but I’m not sure about that old lady.’

Clementine giggled. ‘You mean Aunt Violet? She looks scarier than she is.’

‘Do you want me to show you the rock pools?’ Freddy asked.

Clementine nodded. Lavender was lying down with her eyes almost closed. Lady Clarissa wandered down onto the beach.

‘Mummy, can we go to the rock pools, please?’ Clementine asked.

‘Yes, of course. I’ll come too. Make sure you put your sandals on first. Those rocks can be sharp,’ Lady Clarissa replied.

The children put their shoes back on, and raced towards the far end of the beach. A sheer cliff rose up from the rocks. With the harbour wall at one end and the cliff at the other, the beach was a perfect crescent. Lady Clarissa and Lavender followed behind. Lavender was busy investigating the sand, snout down.

‘Look at this,’ Freddy called as he jumped across a puddle onto the start of the rocky outcrop. He crouched down and stared into the clear pool.

‘What is it?’ Clementine squatted down beside him.

‘Hang on.’ Freddy scampered away then returned with a thin piece of driftwood. He poked it into the water.

A tentacle reached out and wrapped around the stick.

‘Isn’t it cool?’ Freddy said as the creature played tug of war with him. After a few seconds, the octopus released the stick and hid beneath a rock in the pool.

‘What else is there?’ Clementine asked eagerly.

Freddy leapt over another puddle towards a much bigger pool.

‘Look at this!’ he shouted as Clementine picked her way carefully over to join him. 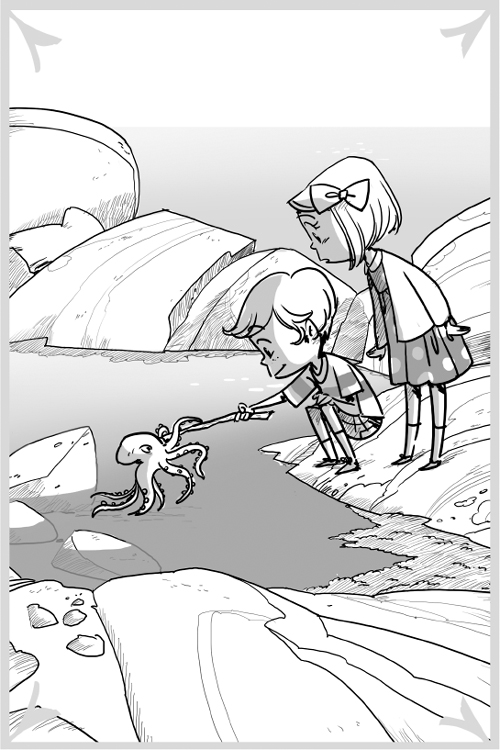 A tiny crab scurried sideways, then was joined by several more. Clementine stared into the water, watching a large crab that was moving slowly along the bottom of the pool.

After a minute, she glanced up and noticed the way the rock shelf jutted out towards the sea. ‘What’s on the other side?’ Clementine asked.

‘There’s another beach and something really amazing,’ said Freddy.

‘Mummy, can we go around further?’ Clementine called to Lady Clarissa, who was now sitting on a large rock with Lavender beside her.

Lady Clarissa’s voice carried back to them on the wind. ‘Yes, darling, just be careful.’

‘This is a proper adventure,’ said Clementine with a smile.

The children jumped and hopped their way across the uneven surface, careful not to slip into the pools. Around the point, the rock shelf curved back towards the cliffs. A few steps below them was a narrow inlet, and on the other side another tiny beach, with a patch of green grass behind it.

‘Can you see anything?’ Freddy asked, as he pointed at the cliff face on the other side of the inlet.

Clementine looked at the vines that tumbled over the top of the ledge and hung down like a veil.

‘What is it?’ she said, squinting.

Clementine gasped. Hidden behind the vines was the outline of an opening. ‘It’s a cave!’

‘Have you been in there?’ Clementine asked.

‘But it’s dark and we haven’t got a torch,’ Clementine said.

The boy made his way down the rocks, then jumped across the shallow inlet to the cave opening. He pulled the vines to one side. Clementine stayed back.

‘We could bring your torch and look in there tomorrow,’ Clementine suggested.

Freddy grinned at her. ‘That’s the best idea. It’s not that scary but it will be better with a torch.’

He was trying to sound brave. When Freddy and Della had discovered the cave on their last visit to Endersley-on-Sea, Della had called him a sook because he hadn’t wanted to go in. She’d pushed him through the vines and the darkness had covered him like a blanket. But he was sure it would be okay with a torch.

‘We’ll come back tomorrow,’ said Freddy. He turned and jumped back across the narrow inlet and over the rocks to Clementine. The two children scurried back towards the main beach. They’d just rounded the headland when a voice screeched above the sound of the waves.

‘Freddy! You have to come home. NOW!’

Freddy and Clementine reached Clarissa, who was looking towards the village end of the beach and the source of the noise.

The boy caught his breath and Clementine noticed he was jiggling nervously, as if he needed to go to the toilet. Della was standing at the top of the stairs with her hands on her hips. Her hair was blowing in the breeze and she looked a bit like a lion – only twice as fierce.

‘It sounds like someone is looking for you Freddy,’ said Lady Clarissa. She squinted at Della in the distance.

‘She can wait,’ Freddy said, his voice wavering.

Clarissa was not so sure about that. She turned her attention back to Freddy and Clementine.

‘Did you find anything interesting?’ she asked.

‘We saw an octopus,’ Clementine said excitedly. ‘And a cave. Didn’t we, Freddy?’

The shouting was getting louder. Freddy looked past Lady Clarissa at his sister, who was now running along the beach towards them. He said nothing.

‘Are you all right?’ Clementine asked.

‘I-I have to go,’ Freddy said, and raced away towards Della.

‘Thanks for the tour,’ Clementine called after him. She watched as he reached his sister halfway along the beach. Clementine could just make out snatches of Della’s words. She sounded angry. She grabbed the boy’s shoulder and marched him away.

‘I think Freddy’s in trouble,’ said Clementine. As she watched, Della pushed him hard in the middle of his back.

‘Oh dear,’ Lady Clarissa said. ‘We’ll have to make sure we ask Della to come tomorrow too.’

Clementine frowned. Freddy was lovely, but Della was something altogether different. 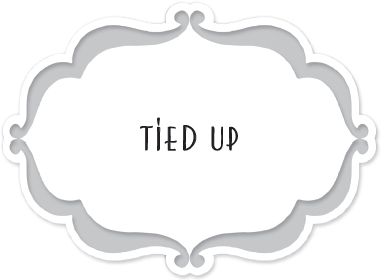 When Clementine and her mother returned to the house, Uncle Digby and Aunt Violet were in the front sitting room.

Uncle Digby looked up from the newspaper on his lap. ‘Did you have a good walk?’

‘We saw an octopus and some crabs and a cave!’ Clementine enthused. ‘But then Della came to get Freddy. So Mummy and I went for a walk around the harbour and I had an ice-cream and Lavender licked up the drips.’

‘Look at that pig!’ Aunt Violet shook her head at Lavender, who was encrusted with sand. ‘You’ll have to give her a rinse, Clementine.’

Rosamund Dent appeared in the doorway behind Clarissa. ‘Oh, a bit of sand never hurt anyone,’ she said with a smile. ‘When you live by the sea you come to expect it. Now, would anyone like anything before I get started on dinner?’

Digby shook his head. ‘No, thank you, Mrs Dent.’

‘I wouldn’t mind another cup of tea,’ said Aunt Violet.

‘You might turn into a cup of tea, the amount you drink,’ Digby said pointedly.

‘Well, you could get it for me,’ Aunt Violet snapped, ‘and save Mrs Dent the trouble.’

Digby hoisted himself to his feet. ‘I’ll come and give you a hand.’

Aunt Violet studied Mrs Dent and wondered how the woman’s face could look like a sunbeam even when she wasn’t smiling.

‘I think we’ll give Lavender a quick rinse in the shower. Clementine, you might like to have a bath too. Then you can be ready for bed straight after supper,’ Clarissa suggested.

‘But Mummy, we’re on holidays,’ Clementine said. ‘Can I stay up later?’

‘Of course, darling. I just thought you might like to feel a bit less salty,’ her mother said.

‘Dinner will be ready in about an hour,’ said Mrs Dent, ‘so you’ve got plenty of time. If you don’t mind helping with the tea, Mr Pertwhistle, I might try to get those two of mine through the bath as well.’

‘Certainly. And please call me Digby.’

‘In that case, you must call me Rosamund,’ Mrs Dent replied.

‘And you can call me nauseated,’ Violet Appleby muttered.

The old woman pursed her lips. ‘No, I’m just a little parched.’

Clarissa stared at her aunt. She’d heard her perfectly.

Clementine scooped Lavender into her arms and followed her mother upstairs. There was no sign of Freddy or his sister anywhere. She wondered if their bedrooms were at the back of the house or above them, on the second floor. Wherever they were, they were awfully quiet.

Doosra by Dhamija, Vish
APOLLO RISING (The Apollo Saga, Book 1) by Arroway, Sage
The Hunted by Heather McAlendin
Gale Force by Rachel Caine
Wicked Whispers by Bangs, Nina
Sorrow Space by James Axler
The Exception by Adriana Locke
Warriors 03 - Forest of Secrets by Erin Hunter
Too Close to the Edge by Pascal Garnier
Taking the High Road by Morris Fenris
Our partner